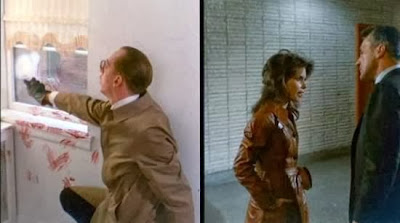 For a guy who has made some pretty important films, Brian De Palma doesn’t seem to get a lot of credit. Who remembers Dressed to Kill, for instance? Folks remember Scarface, but even that film’s once-stellar reputation has faded a bit. Sisters is an early De Palma film, and one of his first successes, but it too seems to be all but forgotten. That’s a damn shame, because this is a film that belongs in a special class of horror thrillers. Like Jacob’s Ladder and Altered States, Sisters is the sort of film that plays merry hob with what it presents to the viewer, making it difficult to determine what is reality and what is delusion.

The title comes from the condition of Danielle and Dominique Blanchion (Margot Kidder), formerly conjoined twins who were separated as adults. Danielle is a model and actress who spends a night with a man she meets in the course of a television acting job. The man (Lisle Wilson) contends with Danielle’s former husband Emil (William Finley) and ends up spending the night. The next morning, he overhears Danielle in conversation with her sister and discovers it is their birthday.

This is important, as our poor friend goes out to buy the sisters a birthday cake. On his return, he awakens Danielle only to discover that it’s actually Dominique. Dominique, incidentally, is insane, and she brutally murders him. In desperation, he writes “help” on a window in his own blood. This is spotted by Grace Collier (Jennifer Salt), a newspaper reporter. Grace immediately launches an investigation while Danielle and Emil hide the evidence of the murder, cleverly folding up the corpse in the hide-a-bed couch.

What follows is a very long and strange trip down the rabbit hole of mental illness and obsession. Grace hires a private detective (Charles Durning). He discovers the location of the body and follows it while Grace investigates the Blanchion twins. The most disturbing thing Grace finds out is that when the twins were separated, Dominique—the twin she is sure she saw kill the man in Danielle’s apartment—died on the operating table. From here, things go very far down that rabbit hole indeed.

Many things can be said about the films of Brian De Palma. One such thing is that he’s never been shy about bringing the gore when it fits the plot. There are multiple places in this film where violence happens suddenly and brutally. It’s surprisingly effective because of its suddenness. De Palma also plays on particular obvious and definite fears in his audience. When Grace goes investigating and discovers Danielle and Emil in a mental institution, Emil convinces the rest of the staff that she is a new patient. It’s a terrifying moment; we in the audience realize at the same moment she does that everything she says only makes her look crazier and crazier.

De Palma scored a massive coup when he enlisted the support of Bernard Herrmann, who crafted a score very much in the vein of his work with Hitchcock. There are several moments that evoke Hitchcock here, both in the soundtrack and in the filming, and with a plot as convoluted as this one, that is not a mistake.

If there’s a failure here, it’s the open-ended nature of the ending. We get some resolution on what actually happened, and it all makes a certain sick sense, but not all of the plot points are resolved, and several important parts of the film are left open. I genuinely don’t have a problem with this. Life, after all, is never a neat and tidy package. However, I can easily imagine that some people will take issue with certain aspects not tying up neatly.

The most interesting and innovative aspect of the film is De Palma’s use of split screen. At times, we see what is happening in two different places to give us a sense of simultaneous action. At other times, interestingly, we see two angles of the same thing, giving us two points of view of what is on the screen.

Sisters qualifies as a horror film only inasmuch as it delves heavily into mental illness and psychopathy. It’s much more of a thriller, but it’s a damn fine thriller.

Why to watch Sisters: It’s significantly messed up.
Why not to watch: Not every plot point gets handled by the end.