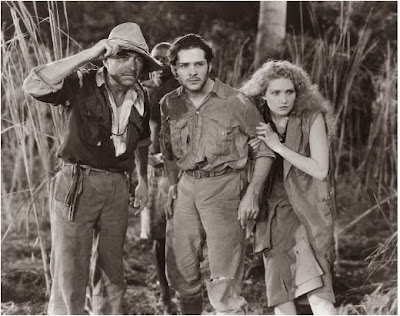 Sometimes I decide to do something, and it seems like a great idea when I think of it. Then something like Trader Horn happens, and I wonder what the hell I was thinking about. Trader Horn was nominated for Best Picture in 1931, evidently one of the weakest Best Picture classes in Oscar history. This is evidenced by the fact that I’m not terribly upset that this film lost to Cimarron. Trader Horn, while no doubt impressive for its time (it was the first film shot on location in Africa), is aggressively racially and sexually offensive and even in the most generous and understanding opinion, is average it best, and even that is with giving the film as much benefit of the doubt as possible.

This is allegedly the story of African trader Aloysius Horn (Harry Carey) and his adventures in discovering a missing “white goddess” living among a savage tribe. Horn is joined by Peru (Duncan Renaldo), who is notable for both his thick accent and his hat, which deserved its own screen credit. Seriously, Peru’s hat is a pith helmet made for Andre the Giant. It extends a foot in front of his face and ends touching his shoulder blades and looks for all the world like a three-tiered beehive. Had there been a hat party during the course of the film, his would have been awarded as the grandest of all. Horn is also joined by Rencharo (Mutia Omoolu, the only African in the film treated with any respect), his gun bearer.

Our group of intrepid ivory poachers encounters Edith Trent (Olive Golden), the mother of Nina Trent (Edwina Booth), a girl who has been missing for years. It is presumed that Nina, if she is still alive, is held in captivity by one of the fierce native tribes of central Africa. She’s off to hunt for her daughter, a hunt that evidently goes badly, since they find her body not long after their meeting. Still, the pair presses on, giving us a zoological tour of Africa. Peru points at an animal and Horn tells him all about it. It’s about this time that the film really started to piss me off. Evidently, several people on the film were killed including someone trampled by a rhino—footage that was apparently used. So they killed the rhino, and we get to see it. Later, we’re forced to watch them kill a lion with a spear.

Anyway, eventually they run afoul of the vicious tribe of natives and it turns out that these natives have a “white goddess,” who is naturally Nina Trent. However, she only speaks the native lingo, which makes communication difficult. Nina is for some reason conflicted. Okay, the reason is pretty obvious; she’s attracted to Peru, so when the gang makes a break for it, she gets dragged along. After all, despite the fact that she’s being treated as a goddess, she needs to be rescued by Horn and Captain Big Hat. The rest of the film concerns our motley band trying to return to what passes for civilization without getting skewered. 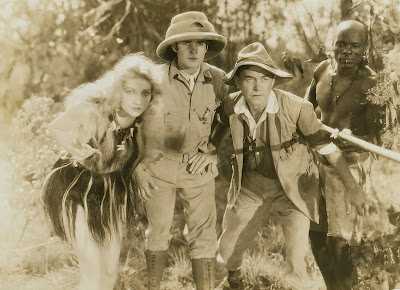 (Seriously, look at the size of Dude's hat!)

There’s a lot going on here, not the least of which is the rampant slaughter of African big game. I realize that the 1930s were massively different than the world today, but it’s difficult to rationalize watching a rhino get shot as a piece of entertainment. A little research suggests that the filmmakers used the footage of the man being trampled, but I find that difficult to believe, since that sequence looks like the worst rear projection work I’ve ever seen. That’s saying something, since earlier in the film, the rear projection would suggest that at one point, our characters were riding in a boat next to an 80-foot crocodile. While there’s plenty of good information about many of the animals (the film attempts to dispel the myth about ostriches hiding their heads in the ground, for instance), it also seems to push the stupidity that “Africa” is a unified place, a giant country. There’s talk of both Zulus and Maasai as warring nations. The Zulus and the Maasai lived in South Africa and East Africa respectively. This is the equivalent of saying that Chicago and New Orleans are close neighbors or that Albania needs to worry about overland invasion from Denmark.

Trader Horn was plagued with problems. A number of people on the film contracted malaria, including Edwina Booth, the white goddess herself. In fact, after this film, she sued MGM for damages and eventually settled out of court. With rampant malaria and people dying on set, one wonders how many people on this film considered the wisdom of filming in Africa in the first place.

I can only believe that Trader Horn got a nomination for Best Picture based on the awe and wonder of the Academy that someone had the cojones to film on location in Africa. It’s mildly shocking to me that I’ve found a film nominated in 1931 that I think deserved to win less than Cimarron.

Why to watch Trader Horn: The first film ever made on location in Africa.
Why not to watch: It’s simplistic, slaughters African big game, and is mostly shit.