Crimes of the Heart

Film: Crimes of the Heart
Format: Streaming video from NetFlix on laptop. 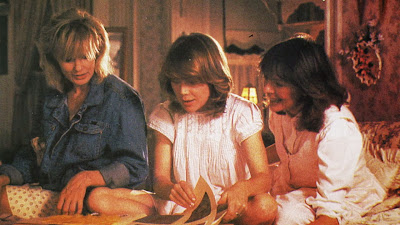 At my core, I am a practical person. I can’t say I was looking forward to watching Crimes of the Heart based on the name alone, but again, I’m practical. When it’s about to vanish from streaming on NetFlix and I discover that NetFlix doesn’t have physical copies, it’s time to buckle down and get through it. I survived Terms of Endearment, after all. How much worse could this be?

Well, I knew it was trouble in the opening credits. While a tinkling piano plays soft and low, we see the names of our three stars appear in slow succession: Diane Keaton, Jessica Lange, Sissy Spacek. As the pseudo-romantic piano tinkles along, a pink heart shape falls from the top of the screen and replaces the “A” in the last name of each of the three stars. This was going to be a rough ride.

Here’s the basics. Crimes of the Heart deals with the Magrath sisters. First is Lenny (Diane Keaton), the spinster of the trio. She spends her life working, gardening, and tending to the grandfather of the three girls (Hurd Hatfield). Second is Meg (Jessica Lange), who escaped from the provincial Southern town of the setting to Hollywood, where she has attempted to have a career and has instead done nothing. Third is Becky “Babe” Magrath (Sissy Spacek), who is currently in jail for shooting her husband, a crime she readily admits. Meg returns home to help deal with the current situation, Babe explains that she shot her husband in part because she was having an affair with an African-American minor, and there’s plenty of crying and screaming and neuroses to go around.

Like I said at the top, I knew right away that this was going to be a rough ride, but I didn’t really expect it to be as rough as it turned out to be. I’m pretty neutral on Jessica Lange, but I tend to like Diane Keaton and I rarely have anything but admiration for the performances of Sissy Spacek. Not here, though. This trio of sisters comprises not three characters, but a host of characteristics and nothing more. Uncover a layer of neurosis and discover a layer of quirk. Uncover a layer of quirk and discover neurosis. The three are caricatures of real people. They’re “movie weird” in the sense that we only find characters like this in the movies. This appears to be true of virtually everyone else in the film as well. Everyone is nothing more than a parfait of mental issues.

Another way to put this is that our three characters are manic pixie dreamgirl wannabees in search of a purpose. Their cousin Chick (Tess Harper) is just as neurotic as the three sisters, but her mental issues are all unpleasant and hateful. That’s again par for the course. If we’re given an overload of quirkiness in someone we’re supposed to like, she becomes a free spirit, independent, or perhaps “unique.” The same traits in someone we’re not supposed to like, and that person becomes a flaming bitch. And that’s Tess Harper, who is passive-aggressive, snooty, and sanctimonious.

And it’s completely overt about all of this. About mid-way through the film, we get a flashback sequence as the three sisters remember the suicide of their mother. It made national news because she also hanged the cat. They discuss that morning and their grandfather taking them out for banana splits for breakfast and how sick they all got, and then they’re all hugging each other and rocking back and forth and shouting each other’s names at screeching volume in painful Southern twangs. I genuinely had to pause the film and walk away from it. I get that this film and this scene in particular is made for women of a certain age who are looking for a character with something of themselves in it, but this was as subtle as a knee to the groin.

Worse, these characters are completely self-absorbed. There’s not a single person in this film who has a thought for anyone besides him- or herself. I’d love to say this is the truest of Meg, but it’s pretty much equally true of everyone. Anything that happens to one person is immediately and primarily viewed through the lens of “how will this affect me?”

It’s true that Crimes of the Heart wasn’t made for such as me. No one would think that a middle-aged guy would sit enraptured, chin resting attentively in cupped hands while Diane Keaton’s character mourns her shriveled ovary. But I can certainly expect that a “woman’s” movie might have something for me to latch onto. I like my share of romantic films and films with women in the lead roles. What I can’t understand is why a trio of faded harpies is attractive, appealing, or interesting to anyone.

Why to watch Crimes of the Heart: Your head doesn’t explode when exposed to three neurotic sisters.
Why not to watch: Parfait layers of quirk and neuroses don’t equal a single real character.

Posted by SJHoneywell at 8:16 PM