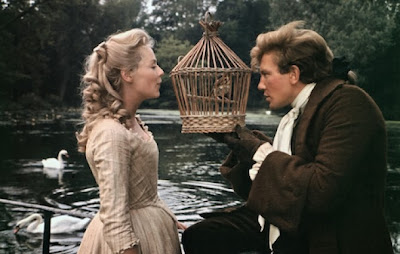 For whatever reason, Tom Jones was really difficult for me to track down. NetFlix doesn’t carry it, and I couldn’t find it in a local library. Of all the Best Picture winners, only Cavalcade was harder to pin down. Well, I found it in a high school library of all places, mildly shocking due to the racy nature of the film. Oh, there’s no nudity and no language, but there’s plenty of sauciness and implied sex.

Tom Jones is marginally a romance and very much a comedy. It’s worth noting at IMDB also calls it an adventure film, something with which I disagree. It is, more or less, a Georgian Don Juan tale. Our titular character (Albert Finney) is irresistible to women. That he’s also a presumed bastard child of a servant makes no difference. In fact, Tom’s alleged mother is kicked out of the service of her employer, as is the supposed father. Tom is raised in the home of his purported parents’ former employer, Squire Allworthy (George Devine).

Tom has a series of romantic entanglements, particularly with local low class girl Molly (Diane Cilento), who isn’t very particular about the men in her life. Despite his dalliances with Molly, Tom really has eyes only for Sophie Western (Susannah York). Sophie is intrigued by Tom and by Tom’s good looks. Sadly for her, her father (Hugh Griffith) has decided that she should marry the son of his sister. This son, Blifil (David Warner), is Tom’s complete opposite. Where Tom is lusty and fun, Blifil is cold and dour. Where Tom is irreverent, Blifil is religious to the point of sanctimony. Most importantly, where Tom is outgoing, open, and caring, Blifil is unpleasant and mean.

We get a sense of just how mean Blifil is when he is given a letter to take to his uncle. Rather than hand it over, he keeps it—and we don’t find out the contents until the end of the film. He also convinces his uncle that Tom is a ne’er-do-well, and so Tom is forced out on his own, to a life on the road to seek his fortune. Here he has a number of adventures, running afoul of some and bedding a number of women, including (and this is pretty much glossed over) the woman presumed to be his mother. Yeah, I said it. There’s a significant incest subplot going on here.

The whole point of the film, though, is to put Tom in as much mortal danger as he can be in and to eventually figure out a way to get him reunited happily with Sophie. Since this is a comedy, it’s not a terrible shock when the ending gets us there. I don’t think I’m spoiling much by suggesting that a Hollywood comedy romance (not a rom-com) might end happily.

There are a number of interesting things going on here. Tony Richardson, who both directed and produced Tom Jones used a number of techniques to play up the comedic nature of the film. We start with a silent film-style pantomime. Characters frequently break the fourth wall and nod or wink to the audience. Stills are used in places, as is Benny Hill-style sped up film. Often, these little comedic conceits work pretty well, and do so because Richardson is smart enough to not overuse them.

My biggest issue with Tom Jones is that it’s incredibly fluffy. It’s a frosting-filled cream puff of a movie, about only itself. Sure, it pushes a few boundaries and manages to push the envelope on sex a bit, particularly for the Georgian Era. Tom has multiple frequent sex partners throughout the film, and while I wouldn’t call it shocking, I would suggest that it’s a bit unexpected for the era of the story. Even more, this is pre-Summer of Love, so the free-loving hero was mildly surprising, too. But for all that, there’s not much going on. A guy gets disinherited, gets in a few swordfights, rolls into a few beds, and ends happily.

As such, it feels too lightweight to really be worth of Best Picture status. It’s not a terrible film, but it’s not one that I can foresee wanting to watch again anytime soon.

Why to watch Tom Jones: It turns the idea of staid Georgian romance on its head.
Why not to watch: It’s silly.