Film: The Last Emperor
Format: Streaming video from NetFlix on The Nook. 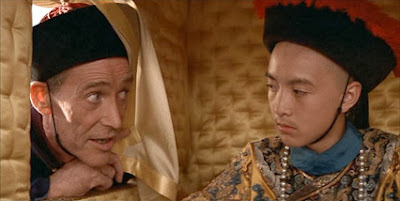 One of the things I love about historical dramas is that I frequently learn about something I’d have otherwise never known. The Last Emperor is a case in point. I know a very tiny bit of Chinese history, mostly connected to World War II. Even so, I knew very little of the history of the Chinese monarchy before seeing this (and I remembered very little before this rewatch). The problem with historical dramas is that any deviation from actual history becomes canon.

Pu Yi (played as a toddler by Richard Vuu, as a child by Tsou Tijger, and as an adult by John Lone) is named as the Emperor of China at the tender age of three. He is moved into the Forbidden City and is forever unable to leave it. While is power is complete and supreme, he is a prisoner of his own position. Additionally, unknown to him because such things are kept from him, China has become a republic, and the position of emperor is nothing more than an elaborate figurehead.

Essentially, within the Forbidden City, Pu Yi’s words are law, but he has no actual power. In fact, it soon becomes evident that the many women who live in the city and the hordes of eunuchs who control the influx of items and goods into the city are the real power, and keep Pu Yi in ignorance to prevent any changes to their easy lives.

Things change for Pu Yi when he gets an English-speaking tutor named Johnston (Peter O’Toole) who teaches Pu Yi more of the outside world. Pu Yi wishes to become a true emperor instead of simply ruling over a single closed city, but the times have passed him by. Eventually, he is evicted from the only place he has ever known. He attempts to Westernize himself, but discovers that the only foreign help he can receive is from the Japanese, who have conquered his native Manchuria. The Japanese set Pu Yi up as a puppet leader of Manchukuo, again stymieing his desire to be a true leader. Around this time, Pu Yi learns that his wife Wan Jung (Joan Chen) has not only been unfaithful to him, she has also become an opium addict.

Of course, eventually the Japanese are ousted from China and Manchukuo and the republic is overthrown. His complicity with the Japanese makes Pu Yi a war criminal in the eyes of the new communist regime. Much of the film is told from Pu Yi in flashback as he confesses his various deeds to his communist captors.

The Last Emperor is a beautiful film, but it is also devastatingly sad. On the surface, Pu Yi’s life is the sort of thing that anyone might wish for. His every whim is met immediately and his ever desire becomes reality. In truth, he is terribly lonely throughout the film and any real desire he has is destined to come to nothing because of the actions and whims of those who control him. In a sense, by having everything he could possibly desire, Pu Yi got nothing that he truly wanted, or at least nothing that truly mattered to him.

It is with that spirit that the film must be watched. Pu Yi, while sometimes terrible in his own right and prone to acting like a spoiled child, is truly a tragic figure. Despite his powerlessness, he is depicted as a man of tremendous personal dignity and as a man unable to suffer publically. He must always give the appearance of being what his position demands of him, regardless of the personal cost. His inability to truly control any aspect of his life or fulfill any of his real desires is the price he pays throughout the course of the film.

I can certainly imagine that The Last Emperor is too much for many a viewer. It’s arguably too long for many, although I do not find it so. I’m not sure what could or should be cut from the narrative. It moves beautifully back and forth between the present day of the film and the past Pu Yi is remembering and is never disconcerting or difficult to follow.

Ultimately, there is a sort of beauty in the tragic life of Pu Yi, and it’s the sort of beauty that I appreciate. I am pleased to have seen this again, and I think I enjoyed watching this story unfold as much this time as I did the first time I saw it.

Why to watch The Last Emperor: A fascinating story unknown in the West.
Why not to watch: It’s a touch too long.