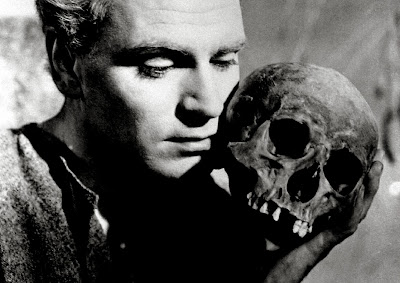 When I look at ranked lists of Best Picture winners, I tend to see 1948’s winner, Hamlet near the bottom. I wonder why this is. A part of me thinks it’s a way for the critic in question to assert “regular viewer” status. Hamlet is the epitome of highbrow, after all. If you admit to liking it, you’re instantly a snob. If you denigrate it, it means you’re more likely to be the sort of person who will drink beer out of the can and enjoy watching movies so bad they’re good. I’ll freely admit that I prefer Kenneth Branagh’s version of the story, but dammit, I like Hamlet, unfavorable opinions or snob status be damned. And more to the point, one of the greatest (if not the greatest) film actors of the last century won his only performance Oscar in this film. If for no other reason, it should be respected for that. I mean, if you want to forget that the play is considered the greatest drama ever penned, that’s on your head.

A film like West Side Story is a hard sell for me not because it’s a musical, but because I don’t care much for the source material. That’s not the case here, and because Olivier’s adaptation is very dedicated to the source material, it would be difficult for me to dislike it much. Toss in the fact that it’s Olivier, and you’ve got something worth watching.

Regarding my typical summary…it’s Hamlet. If you don’t know this story, I genuinely pity you. As mentioned above, it’s the consensus single greatest drama in world history. Not knowing it is criminal if you’ve graduated from high school. On the off chance, though, here’s a quick rundown. Hamlet, Prince of Denmark (Laurence Olivier) has returned from abroad to mourn the sudden death of his father. When he arrives, he finds that his mother Gertrude (Eileen Hurlie) has married his uncle Claudius (Basil Sydney), the new king. Hamlet encounters the ghost of his father, who hints that he died at the hand of Claudius. The rest of the story concerns Hamlet feigning madness to attempt to suss out the truth behind his father’s death.

For me, all of Hamlet boils down to a couple of specific points in the narrative, and how I take a particular production of the story comes down to those points. In the case of this production, it really comes down to the fight between Hamlet and Laertes (Terence Morgan) at the end. Actually, Olivier made a number of interesting choices here. Some of these are spoilers, but I’m deciding I don’t really care. If you’re unfamiliar with the story of this film, well, you’ve had more than 400 years to familiarize yourself with it; the fault is yours.

It’s heavily implied that Gertrude knows that the wine she drinks during the battle sequence is poisoned, meaning that in this production of the play, she kills herself when she realizes what is happening. It’s an interesting interpretation, and it works really well. It’s also interesting to me that Olivier decided to eliminate Fortinbras from the ending, and it’s an elimination I rather like. Fortinbras always felt like an unnecessary addition to me, so not having him here didn’t affect the story at all for me.

I’ll be the first to admit that a great deal of Hamlet, both here and in the play itself, occurs internally. It’s not always incredibly exciting, although I always find it interesting. Olivier goes balls-out on the swordfight between Hamlet and Laertes, though, and it’s another place where a particular decision by the director is important. Because Laertes is using a poisoned blade, it’s important when he and Hamlet switch swords so that Laertes can be killed with his own poison. Here, the switch is made with intent—Hamlet is trading swords on purpose. It’s a decision I like.

Another key point for me is Ophelia’s madness. This is handled beautifully by Jean Simmons in the role. Even better, we get a glimpse of her death with voiceover rather than seeing people talking about what happened to her in retrospect. Ophelia’s scenes of insanity are some of my favorite parts of the story, so I’m happy when it’s handled this well.

In short, I like Hamlet, even if it’s not my favorite version. Branagh’s version, which is arguably too long since he includes everything from the original script, is a more dynamic version in my opinion. That’s really the biggest issue with Olivier’s version—a lot of it is relatively static to the standpoint of a modern audience, which makes it come off as slow. I can easily see someone disliking this version of the film, but I’m happy with it. See it because Olivier truly was great, and you should see one of his more acclaimed performances.

Why to watch Hamlet: Because the greatest actor of the century won an Oscar for it.
Why not to watch: Well, if you don’t like Shakespeare...