The Eternal Sunshine of the Spotless Mind

Film: The Eternal Sunshine of the Spotless Mind
Format: Streaming video from NetFlix on The Nook. 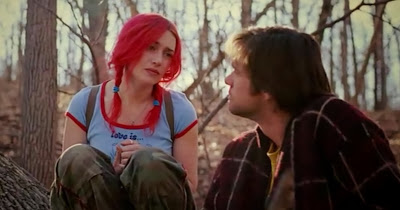 I would love to know how Charlie Kaufman’s mind works. He creates the strangest and most compelling worlds in his scripts and fortunately manages to get equally visionary people to then film them. The Eternal Sunshine of the Spotless Mind is a case in point. In this case, though, I have a strange indicator of where the idea may have come from: cartoonist Carol Lay. It’s possible that this was an entirely independent idea, of course, but Lay created a comic called “Repeat Performance” in which couples repeatedly go to a service to have their memories wiped only to get back together afterward.

And that is the story here. Joel (Jim Carrey) has had a relationship with a woman named Clementine (Kate Winslet). After a few years and a bitter break-up, Joel discovers that Clem has gone to a company called Lacuna which eliminates him completely from her memory. For Clementine, her relationship with Joel no longer exists. In pain, Joel decides to do the same thing to her. He meets with Dr. Howard Mierzwiak (Tom Wilkenson), the creator of the process, and arranges for the erasing to happen that night.

What happens next is a nightmare vision of Joel’s mental processes and memories being destroyed. At the same time, while having the process happen, he discovers that one of the workers, Patrick (Elijah Wood), has co-opted his identity and is now courting Clementine with items from Joel’s and Clementine’s past together. Joel rebels from the procedure, but because he is asleep in the real world and everything is happening inside his mind, he is essentially powerless to do anything except attempt to hide Clementine inside other memories that have nothing to do with her.

While all of this is happening, we learn that two other Lacuna employees, Stan (Mark Ruffalo) and Mary (Kirsten Dunst) are in a relationship, but that Mary has a fangirl’s crush on Dr. Mierzwiak, something that the others treat with caution, which leads to a painful conclusion and the final resolution.

This is a difficult film to really explain because it has a vast number of interpretations, all of which I think might be shades of correct. At its simplest, it is a treatise on the nature of relationships and of pain. Mourning has always been one of the worst parts of life, but it is a necessary part. Lacuna, in the film, allows people to short circuit that process. It may even feel like the right thing in the moment, but it removes a completely real and natural part of the human experience. Perhaps this is a treatise on technology gone wrong, a softer sort of cyberpunk in which we allow technology to willingly strip us of our humanity.

I’m not sure. This is another of those films that feels like its real meaning is just beyond my grasp. I’m okay with that, though, because I’m of the opinion that this is a movie that one feels more than understands, and the feelings are all there.

I like the performances a lot here, too. Kate Winslet is just about perfect as Clementine, who is emphatically not a manic pixie dream girl. In fact, this is one of the strongest points of the film, because that is who she appears to be with her rainbow of hair colors and her evident need to do things on a whim. She even says straight out that she’s as messed up as everyone else and is looking for her own meaning. It’s one of the things that makes me like the character and love the performance. The same is true of Jim Carrey, who, contrary to his typical, plays Joel as understated, sad, and shy. It’s a side of him we don’t see that often, and he nails it.

I think also that Elijah Wood may have gone for this role because it is completely different than the Lord of the Rings films. He’s a scumbag here, and it’s a nice step away from what could have been typecasting had he not done something drastically different as quickly as possible.

Ultimately, I don’t have a solid explanation for this film. I can only say that I love it, and I love how Joel’s vanishing memories are depicted throughout. It is visually inventive and narratively unique. I may not grasp everything and may constantly feel like I am on the verge of truly getting it at its deepest level and failing, but I don’t care. I love trying to understand it and I love revisiting it, much like a memory that hasn’t quite gone away.

Why to watch The Eternal Sunshine of the Spotless Mind: All the feels. All of ‘em.
Why not to watch: If you don’t like weird, you won’t like this.