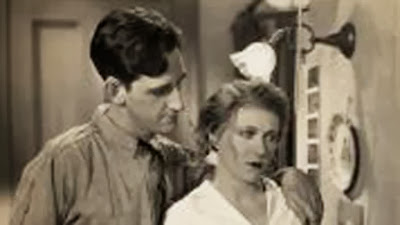 Sometimes, when one watches a very old film, the idea crops up that it might be worth remaking. Such is not the case with Sarah and Son. This is a painfully stupid film, one that hurt to watch frame by frame. I admit that a part of this is that the print I watched was bad—fuzzy and with pretty wretched sound, but I do my best to overlook that. Had Sarah and Son been a perfect print, though, I’m not sure it would have been much better. In fact, there’s a good chance that with additional clarity I’d have liked it less.

We have our titular character Sarah (an Oscar-nominated Ruth Chatterton), who is a Dutch immigrant longing for a career on stage. She’s teaching herself to dance and is working as best she can with her partner, Jim Grey (Fuller Mellish, Jr.), who is lazy in a way that only melodramatic movie characters can be. Sarah’s real talent is singing, though, where she miraculously loses her thick accent. Eventually, Sarah and Jim end up on the stage and have something like a beginning career. When Sarah gets news of her sister’s death back in the old country, she collapses in Jim’s arms. Before you can say, “Doodly-doodly-doop!” they have a baby.

Life isn’t good, though. Jim is a bum and Sarah can’t work because of the baby. Tired of the situation and evidently wanting to do more than sleep, Jim hides the fact that he’s married and joins the Marines before the American advent into World War I. When he fights with Sarah, he takes drastic action. He sells his own child to a wealthy and childless family, then heads off to war. He comes back close to death and is in a hospital where Sarah happens to be performing to entertain the troops. He admits what he did. The rest of the film is Sarah attempting to get her errant son back from the family who now has him To do this, she has to battle Howard Vanning (Fredric March), a lawyer for and relative of the family in question.

To give you an idea of how this film works, we go from Sarah being poor and wondering where her son is to jumping forward 10 years in time and finding her not only with much less of an accent and suddenly a new opera star. As to that accent, she starts sounding like Carol Kane’s character from Taxi and ends up sounding like someone doing an impression of Garbo.

But this is something I can live with. I survived Dick van Dyke’s terrible accent in Mary Poppins, after all. No, the issue here isn’t that Sarah sounds like a refugee from a schnitzel restaurant. No, it’s that this film is melodramatic and campy beyond all measure. It’s also over-acted in that way that only a film from the early days of sound film can be. It very much plays like a silent film in that respect. It’s not difficult to imagine this being originally conceived as a silent film, in fact.

More than this, it’s obvious. When Sarah finally believes she has tracked down her son, it comes as no surprise that the day before the big meeting is to happen, the child (who of course is her son) runs away from home. It also comes as no surprise that the boy’s “adoptive” parents attempt to fool poor, dumb, trusting Sarah by presenting her with the son of their maid instead. If you didn’t see that coming an hour or so in, you weren’t paying attention, since there was no other reason to introduce the maid’s kid in the first place, and no other reason for the suddenly convenient fact that the kid is unable to speak or hear. It’s also hardly shocking that the lawyer not only falls for Sarah immediately, but that he remembers her after a single meeting and is still crazy about her ten years later.

Thankfully, our standards have changed. What was once considered an Oscar-worthy performance would today be laughed out of the theater. It was difficult not to laugh at it watching it tonight, in no small reason for its own misplaced earnestness.

The only thing that is potentially of interest here is that it was directed by Dorothy Arzner, the only woman director working with any impact in the early days of Hollywood. Arzner’s sympathies are entirely with Sarah, and it’s plain that she wants us to feel the same way. Sure, Sarah is a pure and simple soul, sure the people who have her son are easy to dislike despite their money. Sure the final resolution is simple to see coming, since all she has to do is mention the child’s deafness to her new boyfriend and the whole scam is blown. Is this a feminist film? It might be, at least it might be as much as it can be for something made in 1930.

Put bluntly, Sarah and Son is the sort of film that makes me question going back and looking at some of these ancient films in the first place.

Why to watch Sarah and Son: You have an interest in early feminist film.
Why not to watch: Because it’s really not good at all.