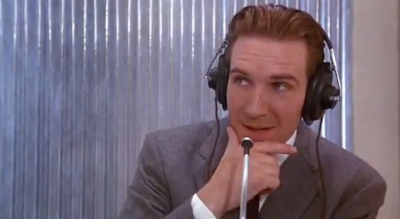 I really like Quiz Show. I like it because first of all, it’s a really well-made film with a fantastic cast. There were some fabrications and changes from real life to the filmed version, of course, but I’m not that upset by it. Quiz Show is a really simple film, and that’s very much the point here. The story itself is so compelling that it needed only a little massaging in places and nothing else to make it worth seeing.

The film is based around the real quiz show scandal of the late 1950s where particular contestants on game shows were fed answers to make them media stars and boost ratings. Specifically, this is the case of the quiz show “Twenty One.” The basics of the show were pretty simple and completely fascinating. Two contestants are placed in separate isolation booths and race to 21 points. The more points they go for, the more difficult the question. The catch in the game is that the contestants don’t know the other person’s score.

As the film starts, the reigning champion is Herb Stempel (John Turturro), a loutish unemployed lump with bad teeth. With more than a month on the show, the ratings plateaued, and the men behind the show, Dan Enright (David Paymer) and Albert Freedman (Hank Azaria) want him off the show. Coincidentally, the young, attractive, clean-cut Charles Van Doren (Ralph Fiennes), who is the great hope for the show, appears as a potential contestant. Enright and Freedman convince Stempel to take a dive with vague promises of a continued career in television. Additionally, with the media sensation that Van Doren becomes, they begin feeding the answers to Van Doren.

While Van Doren’s star rises, Stempel becomes more and more frustrated by his lack of additional television appearances, he makes public allegations that are eventually sealed. This catches the attention of Dick Goodwin (Rob Morrow), who works for a Congressional oversight committee. Goodwin gets permission to start investigating and slowly, the web starts to unravel.

That’s really all there is to the film, and it’s completely compelling because the story itself is so good. While aspects of the real story were massaged for the film—for instance, the film creates a relationship between Goodwin and Van Doren that never really existed, but this doesn’t bother me that much. All we really need is the moral struggle going on here with almost literally the innocence of the American people hanging in the balance.

This film is marvelously cast from start to finish. In addition to Morrow, Fiennes, Turturro, Paymer, and Azaria, even the smaller roles are brilliantly filled as well. Van Doren’s father, for instance, is played by Paul Scofield in one of the better roles of his career—a career that includes an Oscar (and a nomination for this film). Christopher McDonald shows up as the quiz show’s host Jack Barry. Mira Sorvino plays Sandra, the wife of Dick Goodwin. Over and over again, there are good, experienced people in small but vital roles. Even Barry Levinson and Martin Scorsese show up in small roles.

What it really comes down to, though, is the story itself, and what’s done so well here is that it is told without much in the way of fanfare or frills. It’s a straightforward scam that is broken open with diligence and dedication and in many places despite the evident insanity of Herb Stempel. At times, Quiz Show plays almost like a procedural film noir without all of the elements of noir. That sounds like it would make the film boring, but it doesn’t work against it for a moment. It works because the scam is so interesting and because the characters are so worth watching.

Obviously, I like this film a lot. It’s a sadly unheralded film from the middle of the 1990s that should have a lot more people watching it and appreciating it for simply being good without attempting to push itself into being something more than what it is—a damned effective story.

Why to watch Quiz Show: A simple story brilliantly told.
Why not to watch: If you know history, you know where it’s going.