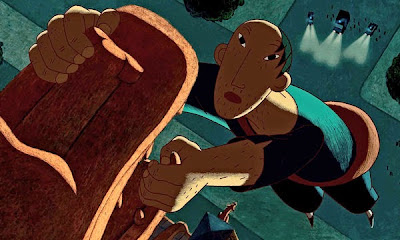 There are times when I wonder what the hell the Academy is thinking. Why nominate a film like A Cat in Paris for Best Animated Feature? Don’t get me wrong—this isn’t at all a case of a film not being good, but of a film that genuinely had about as much of a chance of winning that award as I did. What small readership I enjoy is pretty film-literate. My guess is that most haven’t seen this film and that a large portion haven’t heard of it. Was the nomination there to give a little publicity to a film that otherwise wouldn’t get it? I guess I can get behind that.

The most noteworthy aspect of the film is the art style. This seems to be a theme with me and animated films of late. The art is unlike anything I’ve seen in a film recently, although it bears some surface resemblance to The Secret of Kells. That surface resemblance is little more than it’s being 2D and hand drawn, though. In effect, this is impressionism seen through the lens of Keith Haring with the Squigglevision of Dr. Katz thrown in for good measure. It’s a bit disconcerting at first, but ultimately rather attractive.

Zoe (Lauren Weintraub) is a young girl who lives in Paris with her mother Jeanne (Marcia Gay Harden). We learn or intuit in the first few moments of the film the following things: Zoe doesn’t talk and hasn’t for some time. The reason for this is most likely the death of her father, a police officer, at the hands of a man named Costa (J.B. Blanc). Jeanne is also a police superintendent and naturally wants to put Costa behind bars. Zoe spends her day with a nanny named Claudine (Anjelica Huston).

Zoe’s cat leads a double life. During the day, he brings her gifts of dead lizards and antagonizes the nanny. At night, he lives with Nico (Steven Blum), a cat burglar. Nico spends his evenings stealing jewelry. Jeanne is only mildly interested with the current rash of cat burglaries, although the single clue of cat footprints is an intriguing one. First and foremost on her mind is the Colossus of Nairobi, a massive statue being moved to a museum. Costa has made an attempt to steal it before. In fact, the last time he attempted the theft, he killed Jeanne’s husband.

And thus we have a story that winds around itself that slowly becomes more and more interesting as it goes on. Nico, we soon discover, is the almost stereotypical crook with a heart of gold. And Claudine, of course, is actually working for Costa.

The biggest issue here is the short running time. With a film that just barely cracks an hour, things happen extremely quickly, with very little development. Nico, at one point, is arrested by Jeanne and her assistant Lucas (Matthew Modine). He tells them Costa’s plan, and concocts a way to escape from police custody. And just like that, Jeanne and Lucas decide that Nico must have been telling the truth and are evidently willing to forgive him all of his crimes.

And really, that’s the biggest issue with this film. I could have stood a little more development and plot, but I imagine that even with the somewhat primitive art, that producing this took a monumental amount of time. Still, I’d have loved for this to go for even another 15 or 20 minutes. Nico deserved more development as a character. He goes far too quickly from agile criminal to anti-hero to actual hero, and I’d like this to be something easier to buy into.

The ending is also suitably dark for a noir, but not so dark that it will bother kids watching it. It’s as close to pitch perfect for a juvenile noir as could be expected.

And so, A Cat in Paris really was deserving of its nomination. Sure, it didn’t have a chance of winning over the well-publicized and advertised films that were also nominated for this award, but it’s unlikely I’d have watched it without its nomination, and I’m quite happy I had the chance to see it.

Why to watch A Cat in Paris: Surprising animation and a fun story.
Why not to watch: You’ll want it to be longer than it is.