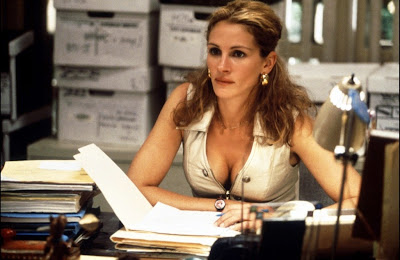 I think it’s kind of easy to dislike Julia Roberts sometimes. I mean, I think it’s easy to believe that she gets a lot of acting jobs because of her looks. While that may or may not be true (and probably is), it’s easy to forget that she can actually act. A film like Erin Brockovich, for which she won an Oscar, is a case in point. A more cynical viewer might well comment that she won for Brockovich’s characteristically foul mouth or because her cleavage is on display in virtually every scene. Again, that may or may not be true, but regardless, this is a good performance.

The film is the sort of biopic that’s been in vogue for quite some time. Rather than looking at a person’s entire life, the film instead focuses on the seminal moment of that life, the thing that truly defines it. We start with Brockovich (Julia Roberts) looking for work and being on the receiving end of a bad car accident. She hires Ed Masry (Albert Finney) to defend her. She loses the case primarily because of her own outburst on the stand. Desperate and unable to find work, she shows up in Masry’s office and demands a job. Feeling sorry for her, he complies, but offers no benefits.

In her personal life, we discover that Erin is married twice, divorced twice, and has three kids. She also has a next door neighbor named George (Aaron Eckhart) who is interested in her and who also willingly takes care of her kids. Yes, eventually there’s a romance that blooms as you would expect, but it actually works in the context of the film.

Everything takes a turn when Erin is asked to investigate a real estate deal for Ed. What she discovers is that the clients have included a massive amount of medical documentation in the file. With a little more digging, Erin discovers something truly unsettling. Many of the people in the town are sick—tumors, nosebleeds, chronic headaches, Crohn’s disease—and many of them have had their medical bills and treatments paid for, no questions asked, by Pacific Gas and Electric.

Even more disturbing is that she discovers PG&E has been using chromium in their local plant and there is significant evidence that the type of chromium is what is causing many of the medical problems. PG&E stalls while Erin mounts a personal crusade to get these people what they deserve, both in terms of a settlement and a sense of justice.

One of the more interesting parts of Erin Brockovich is Erin’s personality. I have no idea if the real Erin Brockovich is the way she is depicted in the film, but she is not an easy person to like. In addition to her near-constant swearing, she is someone who is harsh (to put it mildly) interpersonally. Think Dr. House, but working in a law office. There’s a genuine appeal to this sort of character often enough. It’s easy to enjoy watching someone who has no social graces interact with others, especially when that person tends to be right.

But here, it’s pretty extreme. Erin Brockovich, at least the film version, has a massive chip on her shoulder at all times. The film plays this straight. There are moments when it seems like it might be being played for comedy, but I never really got the impression that comedy was the intent. No, instead, this is simply a woman who has a very low tolerance for bullshit and who also tends to see almost everything around her as bullshit. She’s constantly antagonistic, at least here. (For what it's worth, I think Dr. House is an ass, too.)

Is this a good film? It is. And I don’t doubt Roberts’s performance for a second. Even when she lets down her guard at times, there’s no doubt that she’s simply playing a different aspect of the same person. But it’s a difficult film for me to want to watch simply because the woman we are forced to spend just over two hours with seems so unpleasant personally. Don’t get me wrong—she’s exactly the sort of person you’d want going to bat for you. She doesn’t intimidate easily and she’s a terrier when she thinks she’s right about something. But I’m not sure I’d want to go to her house for a barbecue.

As for everything else, it’s worth noting that I love Albert Finney in this. I love the scenes he’s in and find him completely believable in his role. As for George, well, he just seems too good to be true. Maybe he is, but the real Erin Brockovich married someone else, even though she evidently hired him to watch her kids.

So yes, Erin Brockovich is worth your time. But I’m not convinced it’s a film that really begs to be watched all that often.

Why to watch Erin Brockovich: Because it feels good to see someone kick ass and take names, even when that’s just metaphorical.
Why not to watch: Erin Brockovich is a hard person to like.