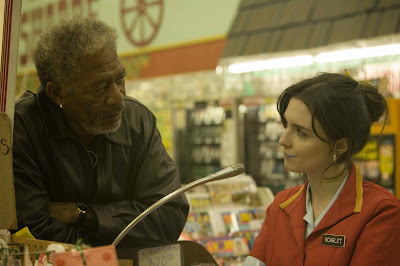 This is the fourth in a series of monthly reviews suggested by Nick Jobe at Your Face.

When Nick Jobe gave me my list of 12 films for this year, I have to admit that there was something about the name of 10 Items or Less that tweaked me. It wasn’t that there was a short-lived television show of the same name. No, it’s the fact that there’s a damn grammar error in the title. “Less” refers to quantities that can’t be counted; the correct word for countable items is “fewer.” So it’s less population, fewer people; less furniture, fewer chairs; less food, fewer hamburgers. “Less” is for mass nouns, “fewer” for countable nouns. Dammit, it’s not that hard.

Anyway, 10 Items or Less is a breezy, short little comedy that follows a tried and true formula of putting two very different people together and seeing what happens. An unnamed but well-known actor (Morgan Freeman) has gone for years without a movie. He’s been offered a role in an indie film and is considering taking it, but wants to do some research first. The director sends him off in a van with Packy (Jonah Hill), who is star-struck in the actor’s presence. Packy is virtually clueless in all things, and eventually drops the actor off at a grocery store in a much rougher part of Los Angeles.

It is here that the actor encounters Scarlet (Paz Vega), who works the eponymous 10 items or less line. Scarlet is incredibly good at her job, able to add up customers’ grocery bills in her head before ringing them in. However, her co-worker is currently sleeping with the manager, and so gets a better register. Scarlet is is continually annoyed by everything, partly because she feels like it’s her lot in life and partly because she realizes that she’s better than the job she has and the situation she is in.

The actor is essentially abandoned at the store because Packy never returns. Due to a security problem, he doesn’t know his current phone number and carries no cash. When Scarlet gets off work, he suddenly becomes beholden to her. The rest of the film consists of the actor and Scarlet going on errands and trying to figure out what they both want out of life and why the two of them seem to be stuck in such a rut. For the actor, this comes down to whether or not he wants to return to acting in a role in an indie film. For Scarlet, it’s about a job interview at an office building. She wants out of her life, but doesn’t think she really deserves it. That sounds fairly heavy, but 10 Items or Less is lighthearted and fun.

It would be unfair of me to call Paz Vega a poor man’s Penelope Cruz. She’s at least an upper-middle class Penelope Cruz (I’m kidding). There’s a sense of real world weariness in her in this film that works perfectly for the character. She’s better than this role as written, but she adds a lot to the role, making it worth watching. Really, Scarlet is little more than “angry young woman,” but Vega gives her depth, passion, and character.

It’s Morgan Freeman who really sells the film, though. I remember seeing an interview with him where he lamented that he had such a reputation for gravitas that people wouldn’t consider him for lighter and more comedic roles. As the executive producer of this film, it would have been hard to deny him the chance to star in this. Fortunately, Freeman is more than up to the task of playing a supremely confident yet completely clueless actor. There are moments of pure joy, like his first entrance into a Target and his shock at the price for designer t-shirts. There is the sense throughout that he is used to special treatment, but also that this is a true adventure for him and what is hardship (for him) is something that has the potential to change his life for the better. He does his best to make it an adventure for himself. While in Target, while Scarlet is trying on clothes, he gives fashion advice to other women. Imagine going shopping and suddenly getting advice on your clothing from, say, De Niro. It’s obvious that both the character and Freeman in the role are enjoying the hell out of the situation.

IMDB makes the mistake of calling 10 Items or Less a romance. It really isn’t one. There are no legitimate romantic sparks between our two leads, and I’m not sure we’d really want them. No, instead, it’s about getting both of these people to realize that they’ve been running in place for too long. They need each other to pull each other out of these ruts that they’ve formed. It’s much more satisfying to think that what has happened with them by the end is simply a friendship and a great deal of respect.

10 Items or Less is very short, which is probably its biggest flaw. Through the credits, it’s just over 80 minutes, and those credits, which feature outtake-style snippets, run close to 10 minutes. On the other hand, all we really need at the end is more of a resolution than we get, but I think the resolution we do get, while less satisfying, is better because it’s more real.

I enjoyed this. It’s fun and cute, and while it’s hardly of earth-shaking importance, it’ll put a smile on the face of anyone who watches.

Why to watch 10 Items or Less: It’s cute. No, really. It’s really, really cute.
Why not to watch: The title has a grammatical error.

Posted by SJHoneywell at 5:02 PM