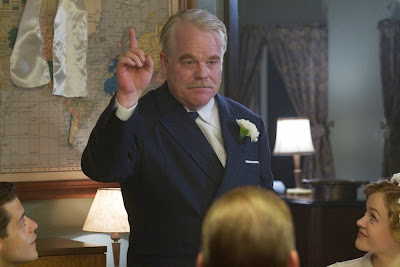 I’ve been told that The Master is at least in part based on the Church of Scientology. Having now seen it, that interpretation makes a great deal of sense. Of course, the film is much more than that, bearing a certain similarity to a film like There Will Be Blood in some senses. Still, it’s hard to avoid the comparison between the film’s fictional pseudo-cult of The Cause and Scientology, and I can’t imagine that it’s not done with a certain gleeful intent.

That said, this is a difficult film for me to judge in many ways. It’s a difficult film to “enjoy” for what it is, but is simultaneously a film that it is impossible not to respect for what it sets out to do. It would be tempting, when tackling something like Scientology even obliquely to make the film an exposé of the methods of the cult, but that’s not what The Master does, at least not obviously. Instead, it follows the fictional movement of the film through someone who may or may not be an adherent and who has his own horde of demons to quell as he goes through life.

Freddie Quell (Joaquin Phoenix) is a veteran of World War II, an alcoholic, and a man obsessed with sex. The jobs he takes after the war all fall through either directly or indirectly because of his alcoholism. Since he creates his own booze from various chemicals including paint thinner, it’s also entirely possible that he is raveningly insane thanks to constant doses of poison he puts into his system. Eventually, on the run from a farm where the workers believe he poisoned another man with his concoction, he stows away on a boat and is only mildly disturbed to find himself at sea.

The most celebrated passenger aboard this private yacht is Lancaster Dodd (Philip Seymour Hoffman), the founding member and spiritual leader of a pseudo-scientific cult known as The Cause. As it happens, he also likes the taste of Freddie’s paint thinner mixture and so recruits Freddie to join up. What follows is an indoctrination that forces Freddie to open up and admit a variety of painful and unpleasant truths about himself. He is taken by the fact that Lancaster Dodd doesn’t seem put off by revelations of Freddie’s incestuous relationship with an aunt, whild Dodd sees some potential behind Freddie’s walking id persona.

The Cause is a collection of junk science including past life regression and faux spirituality, and it’s never clear how much Freddie actually buys into it and how much is just a longing for any sort of acceptance. Since he is out of control, The Cause attempts to rein him in and put him to better use, a job that falls to Dodd’s wife Peggy (Amy Adams). No matter how much he wants to stay, though, Freddie’s demons (particularly his paint thinner alcohol) are always stronger and no promises he makes to Peggy or Lancaster ever amount to anything. Rather than being about The Cause itself, the film is more or less about the relationship between Freddie and Dodd and between Freddie and the teachings of The Cause.

The Master nabbed three Oscar nominations, all for performances—Phoenix for Best Actor and Hoffman and Adams for supporting roles. It’s difficult to suggest that the three didn’t earn these nominations. Hoffman, of course, was almost always good in anything he touched, so seeing a nomination for him is hardly shocking. The film is Phoenix’s vehicle, though, and in a career with a number of noteworthy performances, this is probably his best and most daring in a number of ways. Phoenix takes a lot of risks in this film, playing a man who has really no positive character traits and inhabiting the role completely.

I hate to sound like a broken record, but The Master is another film that is difficult to like but extremely easy to respect. This is a film that shows a great deal of care and mastery over film as an art form and a method of expression. Paul Thomas Anderson is a craftsman when it comes to using his camera to show us exactly what he wants us to see and precisely how he wants us to see it. But is a film with an ugly intent, one that is impossible to avoid looking at. There’s a train wreck quality to Freddie Quell, a morbid desire to see what awful thing he might do next that compels viewing.

As it happens, I can’t really say that this is a film I’d want to own or that I’d even decide to sit through a second time, but I’m very happy to have seen it once.

Why to watch The Master: A penetrating look into faith, belief, and self-delusion.
Why not to watch: Because Philip Seymour Hoffman is no longer around to match or top this.