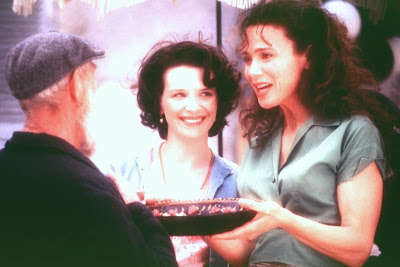 How in the hell did Chocolat fly under my radar for 14 years? Why did no one tell me of the joys of this film? I hold all of you reading this blog responsible for not telling me that Chocolat contains many of the sweet joys of Amelie with all of the beautiful food of Babette’s Feast. I’m upset with all of you.

Okay, I’m overselling that a bit. Chocolat isn’t the greatest film in the world and I might rank it with Babette’s Feast but nowhere close to Amelie. In truth, it’s not really that different from a lot of other films that you (likely) and I (definitely) have already seen. The plot boils down at its very basic to “outsider arrives in town to great controversy and scorn from those in charge and eventually gets everyone on his/her side.” In a very real sense, Chocolat is Footloose with a confectionary in the place of a high school dance. The two films coincide almost point for point. What Chocolat really is is that plot done about as well as it can be done, and about as well as it ever has been done. In other words, this is a gourmet version of a meal you’ve been eating your whole life.

Vianne Rocher (Juliette Binoche) and her daughter Anouk (Victoire Thivisol) arrive in a small French village in late winter of 1959 just as Lent is about to start. She rents a building from the feisty Armande (Judi Dench) and after a few days opens a chocolate shop serving high-end delicacies. Vianne prides herself on her ability to discover a person’s favorite sweet and is remarkably good at this. That she dresses more freely than the other women of this traditional town and that she has an illegitimate child marks her as something of a wanton, particularly in the eyes of Comte de Reynaud (Alfred Molina), who is the political, social, and repressed moral leader of the town.

Slowly, Vianne learns the various relationships in the town. She learns that the Comte’s secretary Caroline (Carrie Anne Moss) is the daughter of Armande and the two are estranged. The reason is that Caroline is of the same traditional, religious, and austere bent as the Comte and feels that her mother is a bad influence on her son Luc (Aureilen Parent-Koenig). She learns that Josephine (Lena Olin) is abused by her husband Serge (Peter Stormare), and eventually Josephine gains the strength to leave him and come live with Vianne and her daughter. She learns that old Guillaume Bierot (John Wood) pines for the widowed Madame Audel (Leslie Caron), who is still mourning her husband who has been dead for more than 40 years. Mostly, she learns that the Comte has decided that she is a terrible influence on the townspeople, offering them little bites of sinful joy during the holy season of Lent.

When a band of river gypsies lead by Roux (Johnny Depp) arrive, the town goes into moral outrage overdrive. Naturally, it is Vianne who befriends the gypsies, especially Roux. And, of course, everything eventually comes to a head and ends in the way that we hope it will once we’ve decided that Vianne is someone we like.

There’s a lot to like here, not the least of which is the gorgeous chocolate. There’s not a moment that takes place around this glorious food that won’t make a viewer wish that the film came with a method that allowed a tasting of the food. It is all beautiful and exotic and wonderful, and were the movie itself terrible, the chocolate would certainly be the major selling point. It’s perhaps too much a break from reality that the chocolate appears to have magical properties throughout. A particular chocolate that is supposed to charge up the libido causes a man uninterested in sex to become a sexual dynamo, for instance. There are plenty of tropes around the chocolate that go exactly as you expect them to. Vianne’s ability to pick someone’s favorite chocolate fails her with Roux, meaning that her eventually guessing correctly is going to be a thing before the film winds up.

Chocolat tries sometimes for subtle and either hits or misses depending on the viewers’ vocabulary. Vianne, who could have easily been named Georgette or Charlotte, has a name that is a single phoneme away from “viand,” a crossword puzzle word that means food, and more specifically means delicacy. Her last name is half of Ferarro-Rocher, a chocolate company. Roux is a cooking term as well. It’s a sauce thickener made from flour and a fat of some sort.

There aren’t a ton of surprises in Chocolat, and typically (as regular readers no doubt note) this bugs me a bit. I don’t always like things when I know where they are going before they get there. Chocolat is an exception because it is done so well. It’s beautifully filmed and it has a sense of joy that is difficult to ignore. Vianne loves what she does and everything she does has a particular sensuality to it. It’s a sensual film in all respects, and like a rare handful of films, watching it made me enormously hungry.

Juliette Binoche is a joy here, as she often is. She’s easy to like because in addition to her free-spirited nature, she is also completely believable. She’s free thinking but not flighty, odd but not bizarre.

This is a good movie as a precursor to a nice romantic evening. Make some chocolate fondue and enjoy the visual feast. It won’t take you anywhere new or anywhere you don’t really want to go, but it’s sweet. Like an actual premium chocolate, it’s delicate on the tongue for a few moments of pleasure, and then melts away into nothing. Isn’t that the definition of a treat?

Why to watch Chocolat: It’s beautiful and fun and sensual.
Why not to watch: You’ll gain three pounds just watching.

Posted by SJHoneywell at 7:02 PM