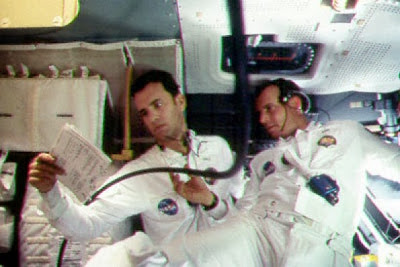 It’s not something that comes up here that often, but I’m a complete space nerd. About a third of the reading I do for pleasure is space science—cosmology, the creation of the solar system, the history of the space program and the like. It’s one of the greatest accomplishments of humankind, and I can’t get enough of it. That creates a problem for me with a film like Apollo 13; I know what’s going to happen here. I’ve read the accounts and I know the history. I know who guys like Deke Slayton and Gene Kranz are without being introduced to them in the film. That being the case, there aren’t a ton of surprises for me here. Of course, that’s also true because I’ve seen this before, but it was true the first time I watched.

What that means in real terms for me as a viewer is that it had better be a damn good film for me to have a good opinion of it. Fortunately, it is. Just as critically, Apollo 13 is accurate except for minor details made for narrative purposes. The main events, and even the things that seem like cinematic foreshadowing are things that actually happened in the real mission. I always appreciate historical accuracy.

The Apollo 13 mission was, to coin a phrase, doomed from the start. Mission commander Jim Lovell (played by Tom Hanks) was originally scheduled to be the commander of Apollo 14, but he and his crew were bumped up in the rotation. Lovell, who was in Apollo 8, would get his chance to walk on the moon with Fred Haise (Bill Paxton) while Ken Mattingly (Gary Sinese) stayed in the command module. Two days before launch, Mattingly was scrubbed from the mission by the flight surgeon for coming into contact with someone carrying the measles virus. He was replaced by Jack Swigert (Kevin Bacon), his mission backup.

Now, I’m going to assume for the next paragraph or two that you are unaware of history, but it’s safe to suggest that if the Apollo 13 mission had gone according to plan that there wouldn’t be a need for a film. As it happens, unlucky 13 was exactly that—a mechanical malfunction that occurred en route to the moon forced a mission scrub. The problem was severe enough that constant problems cropped up, requiring new procedures created on the fly not to save the mission but to save the men onboard and get them home.

That’s it, and that’s more than enough. It’s a hell of a story, the kind of thing that legends are made of, and all the better because it actually happened. If anyone had any doubt about it, Apollo 13 demonstrates that anyone and everyone who ever went up in space from any country has trouble pulling on his or her pants, because they’ve got balls the size of tractor tires.

In addition to the four actors mentioned above, there are some other really noteworthy performances here. Ed Harris, as Gene Kranz, is a solid rock at the center of the story. I think this is my favorite of his many great performances. He’s an island of calm when things are going to hell, which makes those moments where he does show a great deal of emotion that much more powerful. Similarly, Kathleen Quinlan, as Lovell’s wife Marilyn offers up a wonderful performance as someone desperate to maintain an aura of confidence when all she really wants to do is break down. In many ways, she becomes the emotional center of the film, since the men on Apollo 13 and the men in mission control are almost required to keep their emotions in check. It’s her that allows us as the audience to empathize at all.

I can’t really be objective about Apollo 13. Like I said at the top, I’m a geek for space stuff, and this is one of the most compelling stories about the American space program. It’s the sort of story that makes one not proud to be an American, but proud to be a human being, to grasp the size and scope of things that can be attempted and achieved. It’s an inspiring tale made all the better because it happened in real life.

The film ends with a short voiceover by Tom Hanks as Lovell, giving us a little information about what happened with the members of the crew and some of the mission control folks. He ends with the question of when we will be going back to the moon, a question that, almost 20 years after the release of this film, has not been answered. Solar radiation has turned the American flags on the moon’s surface white in the 45 years since the first landing, changing those flags into symbols of surrender.

Look, space stuff is cool. Space exploration, even if it didn’t boost the economy, give us massive amounts of scientific knowledge, and tell us more and more about the universe we live in, would be worth doing for the same reason people climb Everest. Because it’s there, and because doing it is cool. Near the end of the film, Gene Kranz, overhearing the NASA director commenting that this could be their worst disaster, replies that instead it will be their finest hour. He was right

Why to watch Apollo 13: Because it’s a hell of a story.
Why not to watch: If you know your history, you know where it’s going.