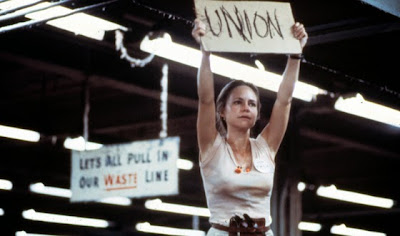 Movies frequently have a “moment” in them that is the absolute heart of the film. In Norma Rae, that moment comes (as is usual) right near the end. It’s the moment pictured above, when our title character Norma Rae (Sally Field) stands up on a table in the middle of a factory with a hand-lettered sign reading “union” in all capitals. While this isn’t the moral heart of the drama, it is absolutely the central moment of a woman driven to the brink.

The film takes place in a small southern town where almost everyone works in the local cotton mill. One of those workers is the aforementioned Norma Rae, who lives with her parents and her two children. The child of her first father died shortly after the child was born; it’s never really mentioned, but it’s implied that they were married. Her younger child is the result of a one-night stand with someone else in town. Norma makes minimum wage, and her father (Pat Hingle) makes a bit more, but they still live at or below the poverty line.

Things start to change when New Yorker Reuben Warshowsky (Ron Leibman) arrives in town. Reuben is a labor organizer who has come to create a union in the local factory so that the workers can have something more than low pay and health problems caused by the working conditions of the factory. It’s a slow process for him, a New York Jew, to get the local people to trust him, but Norma Rae is taken with him immediately.

Norma gets a promotion and a raise, but soon discovers that her new position has some real problems with it. First, it seems that the promotion came for several reasons; it makes her less likely to want to unionize and it also alienates her from the rest of the workers if she does end up going pro-union. When she realizes this, she quits the position and takes her old job back.

Things start to pick up in the union movement when Norma Rae throws in completely. Around this same time, a romance begins between Norma and a local named Sonny (Beau Bridges). It’s evident that Reuben is attracted to Norma Rae on several levels. She doesn’t have much in the way of education, but he can see that she’s got a brain. She’s also dogged and determined and unwilling to back down from a fight in which she believes she has the moral high ground.

Eventually, things get ugly, with the factory owners and management doing everything they can to prevent the unionizers from organizing the workers. This includes putting up notices around the factory that accuse the black workers of wanting to control the union and thus exert power over the white workers, an event that eventually leads to Norma Rae being fired and arrested, and also leads to that moment mentioned above with her standing on a table. It’s a great moment, easily the best in the film and arguably more powerful than the end.

The problem I have with the film is that it feels unfinished. That might well be more realistic than a pat ending, but we’re left hanging as to the fate of Norma Rae. She doesn’t have her job back, she doesn’t appear to have a new job, and we’re certainly able to understand that the vast lower class in this town can’t make it on a single salary. What happens to her? We don’t know. The film ends with Reuben heading back to New York and Norma Rae standing in his rearview mirror. That’s not much of a spoiler, by the way.

Sally Field is central to the film. She’s the title character, after all, and won an Oscar for this role. This was filmed right in the heart of her perky-cute phase; she was more or less the Meg Ryan of the late 1970s and early 1980s. Norma Rae is an easy character to like. She’s forthright and honest and has a low tolerance for bullshit, all good qualities. It’s almost impossible for me not to compare her to Erin Brockovich as a character, since I recently watched that film. The two characters have a massive amount in common, yet I find it far easier to like Norma Rae as a person than I do Erin Brockovich.

The reason for this is simple. Both of these characters have incredible tenacity and are unwilling to step back when they believe they are right. They are rabid in defense of what they want and in pursuit of social justice. But Norma, who has every possible reason to carry a huge chip on her shoulder, is never unpleasant, socially ugly, or personally repellent. Erin Brockovich is. Norma is evidence that Hollywood has the capability of writing a smart, capable, even aggressive female character without turning her into a stereotypical “bitch.”

I’m a little surprised at the lack of nomination for Ron Leibman, who almost certainly deserved a Supporting Actor nod, even if he probably wouldn’t have won. He has a lot of the same characteristics of Norma, and he’s just as easy to like.

Ultimately, I liked Norma Rae, but I wish it was more conclusive. It needs a more solid ending and some resolution. The relationship between Norma and Sonny happens too fast and the tension between Reuben and Sonny never really resolves. Still, it’s a worthy watch.

Why to watch Norma Rae: A movie right at the heart of the 99%.
Why not to watch: It feels unfinished.