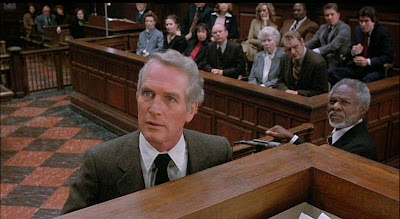 Consider Paul Newman for a moment. While Oscar wins and nominations aren’t specifically the best judge of anyone’s career (Hitchcock never won one for directing; Orson Welles only got nominations for Citizen Kane and nothing else), it’s a good place to start. Newman was nominated for nine acting Oscars, eight of which were for Best Actor. This ties him for sixth all time, behind Meryl Streep (18), Jack Nicholson (12), Katharine Hepburn (12), Laurence Olivier (10), and Bette Davis (10, and he’s tied with Spencer Tracy). It puts the man in very good company, and it means that any film for which he was nominated is one to be taken seriously. When his opposite number is James Mason, you sit up straight. And thus we have The Verdict.

Frank Galvin (Newman) is a down-and-out lawyer who has lost his last four cases, the only cases he’s had in the last three years. He’s reduced to attending funerals, lying about his connection with the deceased, and leaving his business card with the bereaved. He’s at the end of his emotional rope when he is reminded of a pending case. A young woman giving birth to her third child was given the wrong anesthetic and has since entered a persistent vegetative state. It’s the sort of case he needs to get back on his feet, because the hospital wants it to go away. They offer $210,000 to settle, which gives Frank an nice check for $70,000, covers the woman’s medical expenses in perpetuity, and gives the grieving sister some compensation. But Frank has spent that day that the hospital and has decided that this is a case that needs to go to trial, and he turns the offer down flat.

What follows is the sort of underhanded legal skullduggery that probably does happen in real life but only gets shown to us in the movies. Frank arranges for an expert witness who is keen to knock the hospital down a peg, but then the man vanishes on vacation, evidently a plant set up by the hospital to encourage Frank to try the case, and then to pull the rug out from under him. The opposing counsel, Ed Concannon (James Mason) is renowned as an expert in the courtroom, and he plays every trick possible. It’s evident that the judge presiding over the case (Milo O’Shea) has the hospital’s best interests at heart. Even Frank’s latest romance, Laura Fischer (Charlotte Rampling) is actually an employee of Ed Concannon feeding information about Frank’s plans to the opposition. With every possible cause for a mistrial, Frank goes ahead and tries the case anyway, assisted as much as possible by his friend Mickey Morrissey (Jack Warden).

Sounds interesting, right? And it is for the most part, it is. But there’s a real failing lurking in the heart of The Verdict for as good as the performances are. There’s a part of me that thinks Newman may have earned this nomination by reputation more than anything else, but it’s a fine performance, and a damn good one from James Mason, too (he was nominated for Supporting Actor). In truth, while Newman is solid throughout, his nomination most likely came from the last 10 minutes of the film where he gives an impassioned speech to the jury. It’s pretty magnetic, and it is perhaps the film’s strongest moment.

But it’s also where the pervading sense of unreality enters The Verdict. We live in a world where people everyone on the planet knows to be guilty walk away acquitted because of legal tricks. There isn’t a single chance, based on what we see here, that Frank Galvin’s case is going to be a successful one, and yet we know almost as surely as we know the sun appears in the east every morning how the case is going to come out. It’s how films like this work. There’d be no film if there was no redemption for Frank—the whole purpose of the film is to create that redemption for the man. There’s no real happy ending here in the real world. Even if we did get to the ending we do, it’s hardly a conclusion, but is merely the start of a series of appeals.

That’s the biggest flaw here—it’s completely unreal. It’s the sort of film that appeals to us because we like the redemption story. We like it when David beats Goliath because we never really see it happen in the real world. We desperately want the ending we know the film is building up to specifically because it allows us that vicarious moment of joy that sometimes the system actually does work the way it’s supposed to. But the truth is, we know that only because we’ve seen all the dirty dealings that wouldn’t be seen by the rest of the courtroom. We see how dirty Concannon plays and we see Frank’s forthright attitude in the case. We forget that the jury doesn’t know what we do, so when they hand down the titular verdict, it feels like that’s the way it’s supposed to be.

So for all it might have going for it, I guess I just can’t take The Verdict seriously. Other courtroom dramas offer a similar story, and don’t go so far into unreality to get there.

Why to watch The Verdict: Courtroom dramas are always interesting.
Why not to watch: It feels less vital, or at least less believable than other, similar courtroom dramas.