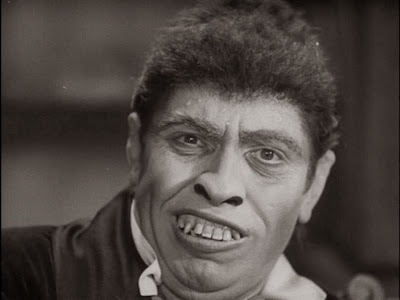 In a particular way, Dr. Jekyll and Mr. Hyde bears a similarity to The Adventures of Robin Hood in that it’s a story that almost everyone has some vague familiarity with but that almost no one has actually read. “Jekyll and Hyde” is a reference understood by almost everyone almost inherently. There are dozens upon dozens of adaptations of the story if you include spoofs, re-imaginings, and reworkings like The Nutty Professor, which was itself remade. I’ll admit I haven’t read the story, either.

Anyway, the version in question here is the 1931/1932 version (typically it’s considered a 1931 release, but IMDB lists its release date as January 3, 1932). This version is particularly noteworthy since it’s one of those rare instances where a film firmly in the horror genre not only received an Oscar nomination, but won.

So while many of us understand the reference of Dr. Jekyll and Mr. Hyde, most of us aren’t terribly familiar with the actual story beyond the basics. We start by being introduced to Dr. Henry Jekyll. It’s odd right off the bat because I’ve always pronounced the doctor’s name as rhyming with “heckle.” In this version, though, the name is pronounced to rhyme with "treacle." Anyway, Dr. Jekyll (Fredric March) lectures a collection of students and professionals about his idea that the human soul consists of two parts—the good side and the bad side. It’s his belief that if the two parts could be separated, the bad could be left on its own while the good could be raised to greater heights.

This theory is resisted initially by Jekyll’s friend Dr. Lanyon (Holmes Herbert). Beyond this odd theory, Jekyll is portrayed as the soul of kindness and goodness. He frequently misses social engagements and dinners with his fiancée Muriel Carew (Rose Hobart) and her father Brigadier General Carew (Halliwell Hobbes). The general is pretty adamant that having dinner is far more important than performing surgery on one of Jekyll’s charity cases. Regardless, one night after a social engagement that he actually showed up for, Jekyll and Lanyon encounter a young woman being assaulted. Jekyll runs to her rescue and thus meets Ivy Pearson (Miriam Hopkins). Jekyll is too Victorian and dense to notice that Ivy is flirting with him. But there’s a part of him that remembers Ivy’s invitation to return to visit her.

This plays out when Jekyll’s desire to marry Muriel is rebuffed by her father, who insists that the couple wait. When Muriel and father head out of London for a month’s vacation, Jekyll is consumed with his earlier theory and loneliness. This results in his creation of his serum. Once imbibed, Dr. Jekyll transforms physically into the brutish Mr. Hyde. Hyde has an oddly-shaped, more simian skull, brutal teeth, is darker skinned (hello, racism), and has coarser features. Hyde, of course, retains most of Jekyll’s memories and immediately seeks out Ivy Pearson, soon controlling her through fear and intimidation.

Things take a much darker turn with the Carews return to London. Jekyll swears off his elixir, but it’s already done its damage—now, Jekyll transforms into Hyde without drinking the potion, and the terrible depredations of Hyde soon start to come back to haunt the good doctor.

At its most basic level, Dr. Jekyll and Mr. Hyde is a story of repression of feelings and emotions. Originally written and based in Victorian London, Dr. Henry Jekyll is someone who is unable to release his inner demons without terrible social cost. His insistence of an early marriage is considered unseemly simply because it implies that he just can’t wait for sex. This severe repression gives rise to the Hyde character, who is allowed to act in remorseless, conscienceless ways, giving in to Jekyll’s dark fantasies without the immediate social cost should Jekyll himself be seen committing such acts. But like all good Victorians, eventually the doctor has to pay for giving in to his baser side.

I get that, and from what I gather, it’s a theme of the original Robert Louis Stevenson novella as well. What I can’t confirm is the other aspect of this film being in the original story. There is no question that a significant theme running through this film is that there are places man was not meant to go—that science has a very dark side to it that lingers not very deep below its surface. I object to that. Certainly science can be used for ill just as any tool can, but science itself is neutral; it’s merely a method of understanding. There isn’t, at least in my mind, knowledge that should be forbidden, only applications.

Fredric March is the main story here, though. While Miriam Hopkins would have been good enough for a Best Supporting Actress nod had the award existed at the time, March still steals the show. Of course, he’s far more interesting as Hyde, who he plays with a particular gleeful menace. All of the overacting typical of the period actually works with the character of Hyde. He carries the dual role beautifully; he’s good as Jekyll but truly grand as Hyde.

It’s also worth noting that the first transformation scene is done brilliantly, and the initial stages of it happen on camera. Evidently, it’s a makeup trick. Makeup was applied to March that didn’t show under certain colors of light and when the transformation happened, light filters were used to slowly reveal the Hyde makeup underneath; the shift in color went unnoticed on black-and-white film. It’s a fantastic sequence and if nothing else, the film is worth it to see this sort of technical wizardry in a film a couple of years removed from the silent era.

Dr. Jekyll and Mr. Hyde suffers from the same sort of overacting that most films of its era do, and frequent overly-broad accents reveal a problem with dialect. Still, I’m not going to complain too much about this. Watch this film in full view of its era, and it comes across as one of the great horror films of its decade, right alongside films like Dracula and Frankenstein.

Why to watch Dr. Jekyll and Mr. Hyde: A classic version of a classic tale.
Why not to watch: Overacting and accent breaks.