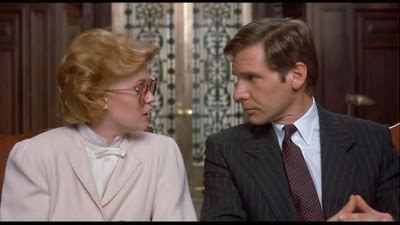 You know how you can tell when a movie is from the seventies by looking at the wardrobes of the people in it? By the same token, you can tell that Working Girl is straight out of the 1980s. It’s not the wardrobe specifically, but the hair. Working Girl features the most ‘80s hair in film history. It’s difficult to fault the film for that, but it’s very difficult to ignore the fact that, for example, Joan Cusak is a good six inches taller with the hairdo. Come to think of it, it’s difficult to ignore her three-toned eye shadow as well.

So how to explain Working Girl? Working Girl is what Wall Street would be if you swapped genders and made it a rom-com. Sort of. Actually, that’s very much selling the film short, because Working Girl is smarter than that. Still, in addition to the big ‘80s hair and shoulder pads and garish eye makeup, this is a film that is heavily mired in the 1980s corporate environment of acquisitions, mergers, and corporate raiding. It’s going too far to call it a quintessential ‘80s film, but it’s certainly one worth pointing at as a solid way to define the decade.

So Tess McGill (Melanie Griffith) is a secretary for a stockbroker who not only doesn’t take her seriously, he attempts to pimp her out to colleagues. Tess, while giving every impression of being from a socially lower class, has aspirations. She’s put herself through business school at night, and we’re led to believe that she knows what she’s talking about when it comes to business. After publically outing her boss as a jerk, she is transferred to another department. Suddenly, Tess is working for Katharine Parker (Sigourney Weaver). Katharine is no-nonsense and makes a great deal of show of wanting to work collaboratively with Tess. That’s not too evident, though, when she takes Tess’s idea for a reception and then has Tess serving food at it. Undaunted, Tess suggests that one of Katharine’s clients, a company called Trask that is looking to buy its way into television, start by purchasing a radio network. It would give them a foothold into the media business and also prevent a hostile takeover from Japan, since laws prevent foreign companies from owning media outlets.

Katharine heads off for a ski vacation with the hopes of her boyfriend proposing to her. However, she breaks her leg and is laid up in the hospital. This forces Tess to handle parts of Katharine’s personal life for her. In so doing, she discovers that Katharine, who said that the radio idea was a dud, has stolen the idea and is pitching it herself to a man named Jack Trainer (Harrison Ford). Despondent, Tess goes home and finds her own boyfriend Mick (Alec Baldwin) in bed with someone else.

Determined to break out of being a secretary, Tess comes up with a plan. She sets up a meeting with Trainer herself and pitches the idea, getting some help from her friend and fellow secretary Cynthia (Joan Cusak). Trainer likes the idea and is convinced it can work, and the two move forward, Trainer convinced that Tess is Katharine’s colleague and not her secretary. Things get complicated when Jack and Tess fall for each other, and it is then revealed that Jack is the self-same boyfriend that Katharine was hoping would propose. And when Katharine comes back and wants credit for the radio idea, everything comes to a head.

Ultimately, there aren’t a ton of surprises in Working Girl, but it’s very carefully mapped out and tightly wound. The plot works extremely well despite Tess getting away with borderline criminal activity at her office because there really isn’t any other way for this film to play out and get the ending we want. The comparison the Wall Street at the top was misplace; in reality, Working Girl is a business-oriented version of Pygmalion, only with the Eliza Doolittle character causing her own transformation and doing it by her own force of will.

What’s really interesting here in my opinion is the subtext. Are we to take from this that women in business, as represented by Sigourney Weaver’s Katharine, are the go-for-the-balls bitch queens of the stereotype? Perhaps. And yet isn’t this the very thing that Tess wants to be herself? Again, perhaps. But Tess is revealed to us as far more human than Katharine despite her duplicity being much more extreme and far-reaching than Katharine’s. Perhaps it’s her more earthy roots that allow us to root for her. Tess is more real because Tess is more relatable. After all, most of us are far closer to working in the steno pool than we are having a corner office.

I’m honestly not sure what to think of it. I’m not convinced that Mike Nichols was intending to create the impression that women in business need to be ball-busters. Given the ending, it would seem that the film wants to imply the opposite—it’s Tess’s humanity that might give her an in, but it’s her brains that keep her there. The fact that Tess isn’t dumb is hugely important here. While she’s not the social match of Katharine in any sense, she is absolutely her mental match, and the film makes sure that we know it, reminding us of it frequently. It’s one of Tess’s best features—she’s easy to root for because she is bright and innovative.

Why to watch Working Girl: A Horatio Alger story that actually works.
Why not to watch: That hair.