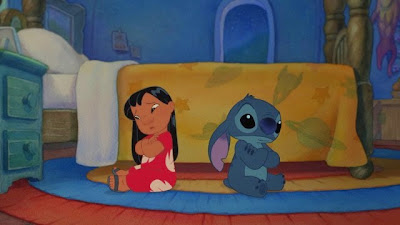 People talk about the Disney renaissance as starting with Tangled or with Frozen. Nobody mentions Lilo & Stitch despite its solid reviews, direct-to-video sequel and television series. This is a Disney film I missed, and if I’m honest about it, it’s one that I didn’t really relish watching tonight. I’ll put this as nicely as I can: I hate the art. I don’t mean that I dislike that it’s different than the traditional Disney style. I mean that I think it’s weird looking and kind of ugly. I find it vaguely disturbing that Lilo apparently doesn’t have teeth. Everyone is oddly blocky and bulbous. It bothers me on an aesthetic level. Regardless of whether I like the story or not, Lilo & Stitch starts with a large strike against it.

We start at a galactic council where a scientist named Jumba Jookiba (voiced by David Ogden Stiers using a thick Russian accent) is on trial for illegal genetic experimentation. He has created something he calls Experiment 626, which we’ll soon be calling Stitch (Chris Sanders). 626 has been designed to be wholly and completely destructive. The experiment is slated for marooning on an asteroid, but naturally escapes, steals a police cruiser and hyperspaces to Earth. He crash lands on Kauai. Jookiba and Earth “expert” Pleakley (Kevin McDonald) are sent to recover 626 so that he doesn’t destroy the planet, which has been labelled a wildlife preserve as a way to protect the galaxy’s endangered mosquito population.

On Earth, Stitch winds up in an animal shelter where he is immediately adopted by Lilo (Daveigh Chase). Lilo is a native Hawaiian who lives with her sister Nani (Tia Carrere). The two are without parents, and Nani is desperately trying to keep the two of them together despite a social worker with the ridiculous name of Cobra Bubbles (Ving Rhames) demanding that Lilo be moved to foster care. Lilo isn’t old enough to realize what is at stake, and everything she does and says only makes it more likely that she’ll be taken away from her sister.

Naturally, Stitch, which is what Lilo names her new “dog” causes nothing but problems, losing Nani her job. The attempts to recapture Stitch tend to reflect badly on Nani as well, bringing all of the disparate plot elements to a head at the same time. And, since it’s Disney, everything is going to eventually work out fine with a happy ending for everyone involved.

The art is a huge hurdle for me. Everyone’s eyes are set too far apart. They have bulbous noses, and without teeth, Lilo’s mouth makes her look like a muppet. I can’t stress how much this disturbs me, but I’ll leave off because you’re probably tired of reading about it.

What surprised me most is how dark it is initially. Lilo is hated by the other kids her age and is an outcast in her own peer group. Much of this appears to be because she and her sister have been orphaned and are poor. Admittedly, some of this is because she’s also portrayed as the weird kid, but this seems to hit a note of reality that Disney films aren’t noted for. It does, however, match Disney’s penchant for kids missing one or both parents. They seem to love that shit.

Anyway, Lilo & Stitch, for all the science fiction trappings, is pretty standard fare from Disney. It has the standard elements here of a kid suddenly thrust into a magical world and adults who don’t seem to notice that there are strange things going on around them. Is it a shock that no one notices that Jookiba, wearing Hawaiian shirts, has four eyes? Or that Pleakley only has one? Or that the aliens speak perfect English, albeit one of them sounding like he’s from Moscow? Whatever—this isn’t questioned because we expect it from a kids’ film.

And therein lies my biggest problem with Lilo & Stitch. The best children’s films deal with issues that concern kids but that don’t create an air of artificiality around them. Frozen works because kids understand fear and relationships between siblings. Sure, it’s draped in magic and fantasy, but the relationships underneath it are real and the situation of those sisters are real for the world of the film. In Lilo & Stitch, we’re presented with a close-to-actual real world Earth where nobody notices a blue alien “dog” that dances and plays the guitar. It’s funny, but it falls flat because the world it presents doesn’t make sense to an adult. It’s not internally consistent. Kids probably won’t notice that, but it’s lazy filmmaking, or at least lazy screenwriting in my opinion.

So, ultimately, I guess there’s a reason that no one talks about the Disney renaissance starting with Lilo & Stitch.

Why to watch Lilo & Stitch: Cute, if standard story.
Why not to watch: Weird art.