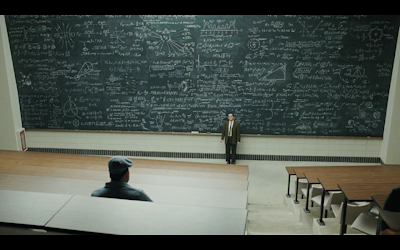 I like the Coen Brothers pretty much without exception. Note the words “pretty much” in that first sentence. Admittedly, I haven’t seen all of the Coen films, although I am in double digits with their filmography, and I’ve liked or loved all of them. Until now. There’s something about A Serious Man that simply rubs me the wrong way. I realize that I’m in the minority on this—there are a number of people who consider this one of their best if not their absolute best. For me, who has seen 10 of their 16 films, A Serious Man comes firmly in 10th place.

Larry Gopnik (Michael Stuhlbarg) is a pretty ordinary guy on the surface, but a seething cauldron of angst underneath. His marriage is falling apart, his kids have no respect for him, his application for tenure is under review and not looking good, a student tries to bribe him, his brother sleeps on his couch, and his neighbor is constantly encroaching on his lawn. Everything starts to fall apart at exactly the same time.

Among the things that are falling apart is his marriage. His wife Judith (Sari Lennick) suddenly comes to him demanding a get, a traditional divorce, so that she can marry Sy Abelman (Fred Melamed). As discussions concerning the divorce continue, it becomes clear that both Judith and Sy blame Larry for everything wrong with the marriage and expect him to pay for everything. They also expect him to move out of the house rather than have Judith move in with Sy.

Actually, there’s too much to really go into here. Suffice to say that in virtually every place possible, nothing goes right for Larry. There’s plenty of possibility for dark comedy here, and a great deal of that dark comedy comes through. The problem I have with it is that it all seems so mean spirited. Sure, there are times when it feels like the entire world is coming down on our heads, but here, it really is, and it’s all selfish. Larry seems to be the only person in the entire film who isn’t completely focused on himself entirely. Again, I get that this may well be the way we perceive things sometimes.

I’m babbling a bit. Let me try to rein that in.

This really is what it comes down to--A Serious Man contains a lot of potential for humor and some actual humor, but the comedy it has is specifically mean. There’s no joy in this; we laugh at moments (although I managed to get through the whole thing without cracking much of a smile) without sympathy and specifically out of a sense of cruelty. I found it terribly difficult to watch because it is so desperately mean.

This saddens me because I am such a fan of the Coens and their films. I fully expected to like this because I’ve liked, loved, or completely fallen for the previous nine of their films that I’ve seen. I can’t pick a favorite right now because I can argue for four or five of them in that position.

Even the dream moments, which are slotted in carefully to look like they are actual reality and are revealed as dreams only when Larry wakes up in a cold sweat, contain the same sort of malicious humor as the rest of the film. The film ends on a malicious note as well, adding a destructive and vicious coda to what has already been a film filled with existential angst.

It’s a shame, because the theme of the film is one I should like. For those of a certain mindset, it could be argued that A Serious Man tells the story of what happens when someone turns away from religion, tradition, and spirituality. On the other hand (and my preferred reading), this is the story of the pointlessness of religious belief, since what happens will happen regardless of our faith. The ineffectiveness of the three rabbis seems to me to indicate that this is the meaning intended.

And so, ultimately, A Serious Man is a film I found seriously flawed. I expected better from the Coen Brothers.

Why to watch A Serious Man: It’s a Coen Brothers film.
Why not to watch: It’s mean.