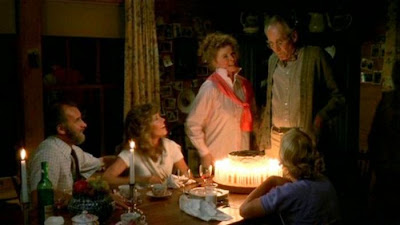 One of the necessities of my regular Friday feature is that I have to have a completed Oscar category ready to go. I’ve got enough for some weeks into the future, but I’m mildly panicked about running out, which means that I try to complete a category (or two) every week. Because of this, my NetFlix queue is pretty top-heavy with films that are the last one I haven’t watched or rewatched for a given category. It means that sometimes a film shows up that I’m not really excited about seeing. Such was definitely the case with On Golden Pond. I mean, my favorite genres are horror and science fiction. Do I really want to spend close to two hours watching a couple of old people get older?

There are a few hidden perks in this film even if it does spend a great deal of its time trying to force the audience to reach for their hankies. The primary pleasure of On Golden Pond is watching Henry Fonda act like a cantankerous son of a bitch to all and sundry. Much of the reason this works is because it’s Henry Fonda. Much like Once Upon a Time in the West trades on Fonda being a bad guy after a career of playing an everyman, On Golden Pond makes him mean and spiteful after a career of playing the guy you’d love to live next door to.

Norman (Fonda) and Ethel Thayer (Katharine Hepburn) have returned to their summer cabin on the shores of Golden Pond. We’re never told exactly where Golden Pond is, but the accents of the locals indicate that it is most likely in Maine or close by. We get a few tastes of Norman’s ire in the first few scenes and when he gets himself lost in the woods, there’s more than a hint that he’s in the initial stages of Alzheimer’s. Things alter somewhat when the Thayers receive a letter that their daughter Chelsea (Jane Fonda) is coming to visit with a new boyfriend.

Chelsea arrives with new boyfriend Bill Ray (Dabney Coleman, harder to identify by sight with the full beard but immediately identifiable thanks to his voice). Also in tow is Billy Ray, Jr. (Doug McKeon), Bill’s son from his failed marriage. Billy has just turned 13, and he isn’t pleased when he realizes that the trip to the cabin had an ulterior motive. He is being left here for a month so that Chelsea and Bill can have a vacation of their own. He’s not happy about being put into the care of an old couple he doesn’t know and Norman isn’t particularly pleased with having a youngster running around his house and questioning everything he does.

But, as happens in the movies, summer on a lake causes young Billy and old Norman to bond over time and begin to like each other’s company. That sounds nice, but it causes resentment when Chelsea returns, since she and her father have never gotten along, which causes her to wonder why he’s suddenly bonded with a kid dropped in his lap.

So, in essence, On Golden Pond is a family drama made interesting by the father/daughter acting combo of Henry and Jane Fonda. This really is the entire movie—an old man slowly becoming senile bonds with what will likely become his step-grandchild and deals with the alienation of his adult daughter. Katharine Hepburn’s role in all of this is to act strictly as the film’s warm moral center. There’s no question of her being cranky or irritated or ean. She never is, seeing only the best in everyone she encounters and operating like a peacekeeping matriarch of the Thayer family. Hepburn is, for all the bluster of Ethel at times, the human core at the center of the drama.

It’s pretty safe to say that I won’t be seeking out future opportunities to watch On Golden Pond, although it’s equally fair to say that this isn’t specifically the movie’s fault. This is a very well-made film front to back with real, genuine performances. It just happens to be in a genre that doesn’t rank among my favorites. It’s not really a film that calls out for frequent rewatching or promises to divulge secrets for those who plumb its depths multiple times.

But I did like the film, and am happy that I watched it. It’s perhaps a bit too pat in places and suffers from the sort of story that could only really be a movie, but its heart is in the right place and it’s difficult to fault something so honest and forthright. There’s nothing here in the way of excitement or thrills, but it’s a pleasure to watch Henry Fonda act like an angry old man. He may have even really been one.

Why to watch On Golden Pond: Because Henry Fonda is an awesome son of a bitch. Why not to watch: If you’re looking for excitement, look elsewhere.