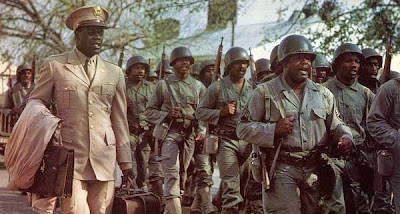 I went into A Soldier’s Story blind. I watched it more or less because I found it at the library, which is essentially the reason I choose a lot of the films I do. I had no idea going in that this is in many ways a film I’d already seen. Admittedly, when I saw it last it was called In the Heat of the Night and I’ve seen something similar called A Few Good Men. But we’re not here to talk about either of those films.

A Soldier’s Story, like A Few Good Men is about a military criminal investigation. A sergeant has been murdered on a military base and a captain who is also a lawyer is sent down from Washington to investigate the crime. In the course of the investigation, he discovers roadblocks and obstruction at every turn. Like In the Heat of the Night, at its core, this is all about race, and it handles race with the sort of complexity it needs.

The murdered sergeant in question is Sergeant Waters (Adolph Caesar), a black sergeant in charge of a black platoon in the middle of World War II. Racism is rife since the based is in the heart of the Deep South, and it’s immediately assumed that the local town population or the local branch of the KKK is responsible. Not satisfied with the answer and needing an investigation, Captain Davenport (Howard E. Rollins, Jr.) is sent to conduct a complete investigation. The twist here is that Davenport is also black, and a high ranking officer. For most of the people on the base, Davenport is the first black officer they have seen, and most of them have to salute him.

The entire film is the investigation, which happens in the present of the film and through a great deal of flashback during questioning. We learn that the platoon is made up of Negro League baseball players who were kept as a unit and a team. In addition to their regular duties, the men also play baseball games as exhibitions. Davenport gets resistance from base commander Colonel Nivens (Trey Wilson) and initial resistance and eventual respect from Captain Taylor (Dennis Lipscomb). Among the men, the most interesting interviews are with Private Wilkie (Art Evans), Corporal Cobb (David Alan Grier), Private Smalls (David Harris), and Pfc Peterson (Denzel Washington in a very early role).

Through his investigation, Davenport learns why each of the men hated their sergeant. He was cruel, vindictive, and hated soldiers who kowtowed to the white officers. Particular in his rage was a soldier named C.J. Memphis (Larry Riley). Over time, Davenport discovers that plenty of men had a reason to want the sergeant dead.

And this really is the strength of the film. The story that unfolds is interesting and worth seeing. It’s a complex tale with a number of threads that eventually all tie together. In a sense, there are echoes of film noir in this film. The story gets more and more complicated, clues come to light to change our (and Davenport’s) thinking, and the conclusion we reach is both the right one and one that is completely unsatisfying in many ways. It wears these roots well.

It also benefits hugely from the presence of Howard E. Rollins, Jr. There is a natural sense of gravitas when the man steps in front of the camera. It’s impossible to take the man for anything other than what he is here: a man in charge of the situation and demanding of the respect of those around him. It’s no coincidence that I compared this film with In the Heat of the Night. He has the same sort of bearing and commanding presence of Sidney Poitier in that film, a feeling that everything he says is important and needs to be listened to. It’s also no coincidence that when In the Heat of the Night was turned into a television show, Rollins was given the role of Virgil Tibbs. This is not a quality that can be faked; when Rollins speaks in this, everyone listens, including the audience.

Another benefit is the presence of Adolph Caesar, who was nominated for Best Supporting Actor for his role as Sergeant Waters. Waters, we learn, is a man impossible to like, but by the end, he is just conflicted and terrible enough to be pitied. Caesar conveys both menace and pain in the role of Waters, and carries much of the same quality as Rollins. The main difference is that Rollins’s role allows him to be seen as noble, while Caesar is savage. We listen to him because we are terrified of what he might do next.

In almost every respect, A Soldier’s Story is a film that demands viewing, one that is of tremendous quality from start to finish. But it does have several problems. First is that it is so similar to In the Heat of the Night that the ending isn’t a terrible shock. It follows far too closely to that playbook to be anything other than a more recent (albeit set more distantly) military version of the same film. Even the character types are similar, down to Captain Taylor starting the film wondering what to do with a black officer and ending the film with a grudging respect. This is old territory, and that’s disappointing.

The second is that the film itself brings up a host of racial questions that don’t do much for the film itself. It’s an understood that Norman Jewison, as the producer, could hire himself to direct the film, but it feels like a massive case of white guilt, or Jewison attempting to prove that he’s racially sensitive. I should let Howard Rollins explain what I mean. In reference to this film and the relatively low salary he was given, he said, “This project is being referred to as ‘special,’ ‘unusual,’ ‘different,’ but when you cut through the bullshit it’s because it’s a black production.” He’s right. Race is the selling point here. In that sense it feels exploitative, or at least racially sensitive for the worst reasons. That Rollins, who is pitch perfect in this film in every frame he’s in couldn’t swing a nomination for himself just feels like more of the same.

It’s a good story and well-acted, but I can’t shake the feeling that it has a strange cloud over it.

Why to watch A Soldier’s Story: It contains a depth of anger little seen.
Why not to watch: Despite its anger, it feels like rehash.

Posted by SJHoneywell at 6:08 PM