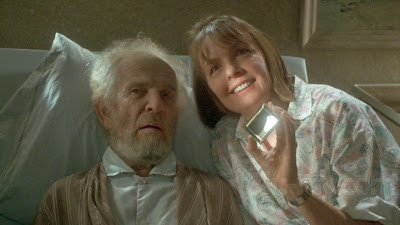 Sometimes I don’t get to make the decisions I want to. A case in point is my watching Marvin’s Room today. My reason for watching it, beyond the fact that it is on one of my Oscar lists, is that it vanishes from NetFlix streaming in a couple of days and NetFlix doesn’t have it on DVD. So it was pretty much now or never. I was heartened by the cast, which is top to bottom excellent. I was concerned about the plot based on the short synopsis. But, rather than let this slide into the “can’t find it” pile, I figured it made sense to knock it out.

So let’s talk about that cast for a moment. Diane Keaton was nominated for Best Actress here, making this one of a handful of times someone other than Meryl Streep was nominated. We also get Hume Cronyn, Leonardo DiCaprio the year before he did Titanic, Robert De Niro in a small role and Dan Hedaya in a smaller one. Seriously, this is a cast any first-time director would mortgage his soul to get.

Anyway, Marvin’s Room is what is really meant when someone talks about a women’s film. Most people associate that label with romantic comedies, but I do not. No, in my opinion, Hollywood is convinced that women specifically want to spend 90-120 minutes experiencing every possible flavor of emotion in the human spectrum, many of them at the same time. In real terms, this means we’ll be getting life-threatening illnesses, family reunions, screaming fights, tearful reconciliations, and moments of ridiculous happiness. In other words, I grew a fine set of ovaries while watching.

Bessie (Diane Keaton) has been taking care of her father Marvin (Hume Cronyn), who suffered a severe stroke. She’s also caring for her aunt Ruth (Gwen Verdon), who has gone loopy. Feeling run down, Bessie has some blood work done by her doctor (Robert De Niro), who discovers that she has leukemia, and that the only way to save her life is a bone marrow transplant. This poses a problem, because Bessie’s only other living relatives are her sister Lee (Meryl Streep) and Lee’s sons Hank (Leonardo DiCaprio) and Charlie (Hal Scardino). Charlie is a decent, if bookish, kid. Hank, on the other hand, is institutionalized at the start of the film because he purposefully burned the house down.

Sounds okay, right? Except there’s also this—Lee bugged out of Florida after her father’s stroke and moved to Ohio. She hasn’t contacted a single member of the family in the past dozen or more years. Bessie hasn’t seen or heard from her since she left—she’s never met either of her nephews, and now needs to beg them to see if any of them can save her life and assist her in taking care of their still-ailing father. So right there, you can see exactly why we’re going to have not an emotional parfait, one layered on top of the other, but an emotional puree, with everything mixed together and experienced at the same time.

So here’s the thing--Marvin’s Room is straight emotional manipulation. There’s enough wackiness included so it isn’t a straight shot into depression, but even so, it’s not merely manipulative, it’s obviously so. Hank is a delinquent. Do you think he’ll change by the end of the film? Lee is a terrible mother, particularly to Hank. Think things will change by the time we’re done? Thing Lee and Bessie will come to some sort of agreement by the time it ends? Would you be surprised if I told you there was piano music and strings through the whole thing? Revelations come fast and furious, and each one is enough of an emotional body blow to sustain a full movie, but we’re going to get all of them in this one.

And that’s really the whole point. Bessie and Lee yell at each other, then bond over Lee’s extensive make up kit she has for cosmetology school. Hank doesn’t want to get tested for a marrow match, but then he does. Marvin babbles aimlessly at random, plot-specific times.

I’m fairly certain that Marvin’s Room is a fine example of this sort of film. In that respect it reminds me a great deal of Terms of Endearment, an excellent film that very much wasn’t made with me in mind. I can very much understand someone enjoying this or at least appreciating it. The acting performances, for instance are solid all the way through. But me, not so much. I’m just happy it’s over.

Why to watch Marvin’s Room: A cast to die for.
Why not to watch: Every emotion at every moment! Feel them all!