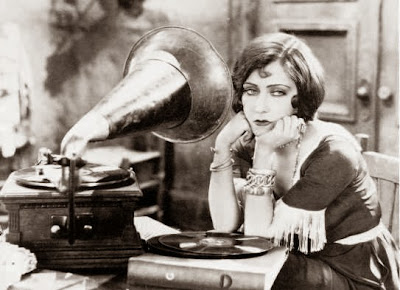 I don’t watch a great deal of silent film, and when I do, I tend to prefer comedies over dramas. When I decided to give Sadie Thompson a go, it was not without some reservation. Part of the reason I was doing this more out of obligation than desire is that silent dramas are so often heavy-handed when it comes to the meaning. Part of it was the knowledge that the original last reel of the film has been lost, meaning that what is there at the end is stills, with the best approximation of the story available. The chance to see Gloria Swanson as a young actress was a draw, though. I really only know Swanson from Sunset Boulevard, so seeing her at the height of her career got me interested.

Sadly, Sadie Thompson is pretty standard fare when it comes to silent dramas. Everything is played larger than life and people are their character traits to an extreme. We start with the arrival of a boat in Tutulia in the south Pacific. Our title character, played by a young Gloria Swanson, is a woman of questionable virtue headed for the island of Apia where she claims to have a job waiting. Also on board are the Davidsons (Lionel Barrymore and Blanche Friderici) who are renowned as reformers of the old school. In other words, they are religious zealots who want to save the pagan natives from their pagan-y ways.

It’s no surprise that Sadie runs afoul of the Davidsons right away. However, she also attracts the favorable attention of a soldier named Tim O’Hara (director Raoul Walsh) who isn’t troubled by the fact that she was likely recently a prostitute in San Francisco. The two eventually agree that she’ll head to Sydney and when he’s done with his military career, he’ll head there and they’ll get married.

None of this sits well with Davidson, though, who demands that Sadie return to San Francisco immediately. Because of his reputation as a reformer, the governor of the island agrees, then relents, saying that Sadie can indeed go to Sydney if Davidson agrees. He doesn’t of course, demanding instead that Sadie repent for her sins, confess everything to Jesus and be washed in the blood of the Lamb. And, this being a film made in the late 1920s, of course she eventually succumbs and comes to think that the only way out for her is to return to San Francisco, where she will be arrested for a crime she didn’t commit and sent to prison to serve out a sentence she doesn’t deserve. Ah, but this is the penance that the self-righteous Davidson requires of poor Sadie, and the girl has fallen under his spell.

And…the last reel is missing, dammit. Hollywood has never really liked the self-righteous or hypocritical, though, which means that the last reel can’t be anything good for Davidson, who is obviously attracted against his will to the sexy Sadie. It wouldn’t be the first time that someone of a dogmatic religious bent was overreacting to cover for his own carnal desires, after all.

My biggest issue with the film is the bulk of the second act, although I can’t say I’m terribly surprised at the way it plays out. This part of the film is filled with hyper-religious moralizing, which I found incredibly unpleasant. The thing is this—it makes sense that a heretic like me would find the proselytization to be ugly, but this is done in a way that I think even the most dedicated believer would find that sequence equally unpleasant. Davidson is a moral thug. While I find this part of the film distasteful for what I consider a fairly accurate portrayal of religious dogma taken to its logical extreme, those of a more religious bent will no doubt find this to be a merciless antithesis of what they feel their religion should be.

I can’t claim to have enjoyed this film because I didn’t enjoy it. It’s openly manipulative, although that’s not a terrible shock, since it comes close to the dawn of the film industry. It is interesting to see Gloria Swanson at this stage in her career, though, and I did enjoy it for that. It lends a whole new perspective on Sunset Boulevard for one thing.

It’s also worth noting that in addition to the missing last reel, there are large sections of this film that have deteriorated badly and are in desperate need of repair.

Why to watch Sadie Thompson: Gloria Swanson in her heyday.
Why not to watch: It’s preachy and melodramatic, even for a silent film.