This post is a part of the Big League Blogathon started by Todd Liebenow at Forgotten Films. 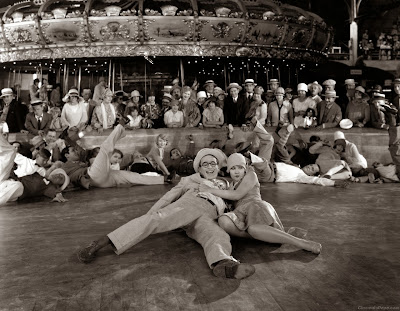 I gave up on sports a number of years ago, but there was a time when I cared about them. As someone who has lived most of his life in the shadow of Chicago, I was at least a marginal fan of most of the Chicago teams with the exception of the Cubs. In truth, I was born in New Jersey and thus grew up a Mets fan. When you move to a new city, you don’t adopt the rival as your team, which is why I never became a Cubs fan. Well, today is opening day. The Cubs lost and the White Sox won. So I felt like writing about something that was at least marginally attached to baseball just for the hell of it. Thus, Speedy, which happens to be the final silent film in the career of Harold Lloyd.

And…Speedy is only marginally attached to baseball. Its main links are that our title character is a rabid baseball fan and that the special guest appearance here is by Babe Ruth playing himself. I’m sure for the time, Ruth was one of the big draws for this film, but Harold Lloyd was quite the draw himself. Of the great silent comedians, he’s one of the sadly forgotten ones, along with Roscoe Arbuckle. Lloyd had the chops, though, and he should be better remembered.

We start with Harold “Speedy” Swift, who is just as good at losing jobs as he is at finding them. One of the running jokes through the film is that Speedy pretty much gets a new job every day, works for a short time, and loses the job. Sometimes this happens because of bad luck; sometimes it happens because he is obsessed with the Yankees. Usually, it’s a combination of the two. His girlfriend Jane Dillon (Ann Christy) is devoted to him and equally devoted to her grandfather, Pop Dillon (Bert Woodruff). Pop runs a horse-drawn trolley, the last one in New York. A railroad concern wants to buy him out, but he has a deal with the city—as long as his horsecart runs at least once every 24 hours, the rails are his. This sets up the third act in which Speedy must work to save Pop’s cart business.

However, this is completely forgotten in the second act of the film, which is something it holds in common with many a silent comedy. The middle section has Harold and Jane spending a day at Coney Island and then Harold working as a cab driver, which includes his meeting with Babe Ruth. The Coney Island trip has absolutely nothing to do with the plot. It exists to cement the relationship between Harold and Jane and to offer Lloyd ample opportunity to display his comedic talents. His stint as a cab driver is much the same with a slight tie back to the plot at the end of this sequence when Harold overhears a phone call that concerns Pop and his business.

And that’s the biggest problem with the film, honestly. There’s enough plot for about half the running time and the rest of the film exists specifically as an opportunity for Lloyd to be Lloyd. In truth, there’s nothing wrong with that, because Harold Lloyd was one of the truly great silent comedians. The comedy here is far less physical and danger-based than in films like The Kid Brother or Lloyd’s apotheosis, Safety Last! Here, the gags fall into three basic categories. The first are sight gags. On the Coney Island trip, Harold is wearing a new suit and spends a good deal of time avoiding stains on it. At one point, he stands next to a woman with a clear, polka-dot umbrella that makes it look like he has a series of stains on his coat. After a few moments, he realizes that the spots aren’t there and gets a good laugh, then walks away, showing us that he’s been leaning against a freshly-painted fence.

The second type of gag is based on timing, a staple of comedy. Lloyd was a master of timing, as any good silent comedian had to be. The third type of gag is a combination of the two. Silent comedies often depended on sight gags, and these are by far the most common in the film. This is all well and good, but the closest we get to the sort of stunt comedy that made Lloyd who he was is the giant pitched battle twoard the end of the film, which is filled with plenty of timing and sight gags and lots of slapstick, but nothing that smacks of classic Lloyd and frequently is little more than guys getting hit, poked, bitten, steam ironed, or otherwise attacked in the hinder. 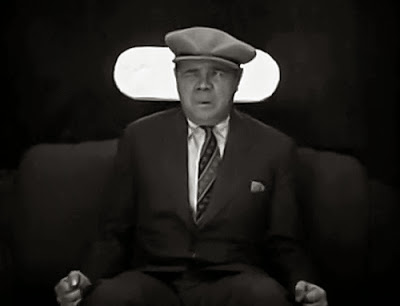 It ends with a chase sequence worthy of any great silent comedy, but even here, it’s sight gags and rudimentary rear projection. It’s all fun, but in a way, it feels tame for what Lloyd was known for, and that’s a shame. The Babe Ruth cameo is entertaining, but it needed the insanity of Lloyd’s earlier films to really make it sing. It’s good, but it’s also a little disappointing.

Why to watch Speedy: Because it’s Harold Lloyd.
Why not to watch: Many of his other films are better.