The Triplets of Belleville 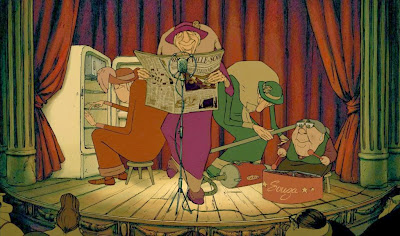 Imagine if you will that animator Ralph Bakshi and director David Lynch got together. One of them opens up a bag and pulls out a small bag that contains the ashes of Jacques Tati. With a grin, the two of them pack the ashes into a hookah and smoke them, then discuss an animated film project. The results of that would, at least in my imagination, end up looking something like The Triplets of Belleville.

Any summary of this film won’t do it justice, but I’m going to try anyway. A young boy named Champion lives with his grandmother, Madame Souza. Champion appears depressed, and no matter what his grandmother tries, he doesn’t seem to pull out of his funk. Even the gift of a dog named Bruno doesn’t cheer him up. Eventually, she buys him a tricycle, and that appears to be the ticket.

Flash forward a number of years. Champion is now a Tour de France rider with Madame Souza as his trainer. During the Tour, Champion and two other back-of-the-pack riders are kidnapped by the French Mafia and transported to Belleville via ship. Belleville is sort of like Paris and sort of like New York. There’s a subtle dig at Americans here, since all of the residents of Belleville are enormously fat; even the Statue of Liberty in the harbor is morbidly obese and is holding a cheeseburger instead of a tablet.

Madame Souza and Bruno follow the ship and arrive at Belleville as well. It is here that Madame Souza meets the once-famous Triplets of Belleville, now very old but still performing. The film actually begins with a performance of the Triplets in their heyday. Now, they discover that Madame Souza has some of their own musical proclivities and they take her in and incorporate her into their act. As it happens, the mafia boss who kidnapped Champion is a frequent guest at the club where the Triplets and Madame Souza perform.

As for Champion, he and the other two riders are trapped on a machine that forces them to keep pedaling stationary bicycles for the betting fun of other mafia leaders. Madame Souza decides it is time to rescue her grandson, and she creates a plan with the Triplets that leads to one of the most bizarre and inventive chase sequences since The Wrong Trousers.

Both the art and the animation style are worth noting here. The animation, as mentioned in the first paragraph, is reminiscent in a way of the work of Ralph Bakshi. It has that same sort of frenetic quality to it where everything on screen is always moving all the time. This is especially true in the opening sequence and less so in the bulk of the film. As for the characters, all, or at least most, are characterized by physical extremity. Champion as an adult is rail thin, has a massive, angular head and giant nose, and humongous legs. Madame Souza is maybe two feet tall. The Mafia bodyguards are rectangles with heads. It’s a unique look.

The biggest similarity to the work of Jacques Tati is that there is virtually no dialogue here, and the few bits of dialogue that do show up are essentially irrelevant and muted. Everything happens through pantomime and action rather than dialogue.

It’s worth noting that The Triplets of Belleville is not something appropriate for children. I’m not saying this because of the brief nudity in the opening couple of minutes. It’s a film that requires very close attention and a lot of reaching conclusions based on what is happening rather than being told what is happening. The willing suspension of disbelief here requires logical jumps on the part of the reader. A bright kid could follow this (this is to head off comments about how someone “showed this to [my] kid and they loved it”) but most kids won’t have the patience or simply the track record of having seen enough films to keep up.

On the same level, I can see a lot of people not liking this. This is very much a film geek’s film. People who aren’t willing to put in the work of making sense of the story won’t find anything here worth watching. Additionally, I can see the visual style throwing a lot of people off. It doesn’t look like traditional animation; it doesn’t really look like anything else, and that’s potentially really off-putting for a number of potential viewers.

I liked it quite a bit, though. It’s very much the sort of film that I can’t see a film geek not loving on some level.

I’m certain I missed a lot. The opening sequence, featuring a song by the Triplets when they were young, has a number of references. I caught, for instance, a direct reference to Fred Astaire as the tap dancer and to Django Reinhardt as the guitar player—I thought that the moment I saw him and knew I was right when I spotted that he was missing a couple of fingers. The dancer with the banana skirt was Josephine Baker. But I know there’s more and there’s more throughout. Maybe when I know more, I’ll watch it again. Fortunately, watching this a second time won’t be a chore.