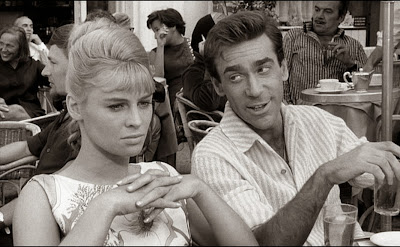 Movies are, after a fashion, a sort of illusion, so I tend to find it interesting when a filmmaker creates such an illusion with intent to destroy a particular set of illusions. Darling is an odd film. London in the 1960s is one of those legendary times and places. “Swinging London” was a time and place of hedonism and decadence and endless partying. It was the kind of place that everyone wanted to be. Darling is an evisceration of the time and place, marking it not as a utopia of pleasure and joy, but as a place of emptiness of all sorts—moral, ethical, emotional. This emptiness is explored through the life of Diana Scott (Julie Christie), who is called “Darling” by virtually everyone in the film.

The story is about Diana’s life, told in a sort of vague flashback. There are moments of flashback here, and evidence at the start that this is coming in the form of an interview of our title character. In effect, though, the bulk of the film simply plays out, and these minor jaunts into past tense voice over are easily ignored and forgotten. This is a story of emptiness and intense, unfocused, vague desire. This desire is unfocused and vague, because no matter what Diana gets, she never really wants it. It’s intense because she is entirely unhappy in almost every moment, even those moments when she is deliriously happy.

In reality, it’s much closer to the story of a woman who gives up everything about herself for something akin to success in the world of fashion and society and continually discovers that the cost is far too high and far too personal, but never really learns the lesson. Diana starts as a model married to an unexciting man named Tony (Trevor Bowen). By chance, she meets a television personality named Robert Gold (Dirk Bogarde) and the two start an affair in cheap hotel rooms. Eventually, they each leave their spouses and move in together.

She then runs into a man named Miles Brand (Laurence Harvey) who serves as a stepping stone into movies, albeit cheap, trashy ones. Still, an advance in career is an advance, and the opportunity to put herself more in the public eye and the social set, even though this doesn’t make her happy, either. In fact, this world that she has found herself in is one that is entirely empty and decadent. Her life with Robert falls to pieces as well, and her dalliance with Miles Brand turns out to be borderline masochistic.

More than anything, the takeaway from Darling is this sort of supreme emptiness and desperate search for something to either make her happy or give her something like meaning, and discovering that nothing she tries works. Eventually, she marries into Italian royalty and even this massive wealth and sudden family leaves her feeling as empty as she ever has. Flirtations with Catholicism fall flat as well.

This is a smart film, filled with moments of brilliance. One of the best is seeing this incredibly unhappy woman in the middle of a photo shoot where she is being put forward as “the Happiness Girl.” Even the decision to shoot this in black and white is the right choice. Director John Schlesinger could have been excused for opting for vibrant color for this, but since the world he is trying to depict is one of moral grays and ultimately without any sort of meaning, keeping things in a darker format works brilliantly.

Darling is not the sort of film I would typically think to watch. It’s a one-off film for me, I think. I wouldn’t call it dull, because it’s anything but. However, it has an atmosphere that is difficult to describe. In a sense, a great deal of the film feels muted in some way, and I think this is strictly by intent. Diana’s world of decadence, excess, and unwanted (but career-necessary) sex isn’t one that makes for a lot of fun on an evening.

Julie Christie is magnificent here. She does some of her best acting in moments where she isn’t talking, but expressing everything with her face and her actions. Eating alone in a massive dining room, being waited on by a series of attendants, she is bored and unhappy, and we know this thanks to a sigh and a rolling of her eyes. It’s as good a performance as I’ve seen in quite a while.

And yet, that’s a part of the reason that I’m not sure I’d want to watch it again, and why this film is so hard to recommend. I’m happy that I saw it, but I can see others finding it too long and too emotionally stifling. I can see others finding it little more than a cavalcade of depression and excess. I get that, but I also get why a lot of people consider it great.

Why to watch Darling: Fashionable amorality.
Why not to watch: It may well feel pointless.