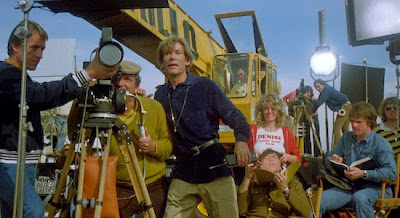 I vaguely remember the release of The Stunt Man. Actually, what I remember is seeing a clip of it on Roger Ebert’s and Gene Siskel’s review show in 1980 and thinking it looked cool. These days, I’m more interested in the presence of Peter O’Toole than I am specifically in the story. Now that I’ve seen it, this is especially true, since the story very much seems like the weakest point of the film. I’ve mentioned my need for verisimilitude before; if I can’t buy into the world of the film, or if the film sets up a reality that it then breaks, it loses me. While there’s plenty to like here, there’s also quite a bit I found frustrating.

A Vietnam vet named Cameron (Steve Railsback) is on the run from the police for unknown reasons. The police manage to get a set of cuffs on him, but he escapes, breaks the cuffs, and runs off. Eventually he finds himself on a bridge where the driver of an old car appears to stop to give him a ride. However, the driver turns the car around and drives right at Cameron as if he’s going to run him down. Cameron throws something at the car to defend himself, the car goes off the bridge, and Cameron finds himself looking at several men in a helicopter.

Confused yet? Don’t be. As it happens, Cameron has wandered onto the set of a movie. As it happens, the driver of the car drowned, leaving the movie down a stunt man. Desperate to stay away from the police, Cameron steps in to replace the dead man. With his hair dyed blonde he looks enough like the dead man to pass for him and he suddenly has the aegis of film director Eli Cross (Peter O’Toole) and leading lady Nina Franklin (Barbara Hershey).

What follows is Cameron’s strange initiation into the world of the film industry, and more specifically the world of Eli Cross. Cross, who takes complete control over his set, acts both as a sort of god and a sort of devil, specifically as concerns Cameron. He is both obsessed with his own control over the set and with making everything on film exactly the way he wants it. This includes doling out information specifically on a need-to-know basis. For Cameron, this means he’s never sure if the stunt he is about to perform is something with proper safety precautions or something that might legitimately get him killed.

And, of course, Cross knows that Cameron is a fugitive. For Cameron, this means he’s not exactly sure why he’s being kept around. Eli Cross is just insane enough, just enamored enough of his art, that he might legitimately want someone to die on film for what it would add to the finished product. Toss in the fact that Cameron has fallen hard for Nina and that Eli and Nina once had a sexual relationship, plus the increased presence of police in the area of the filming, and the result is a Cameron who is becoming increasingly paranoid and increasingly detached from reality.

The highest of high points in The Stunt Man is Peter O’Toole, who plays Eli Cross (allegedly) as if he were David Lean. I have no idea what David Lean was really like, but what it means for this film is that he is imperious to an insane level. Art is everything and everything is art, and nothing is out of bounds for him if it allows him to get the shot he wants. At one point, Nina’s parents visit the set and take a look at the dailies. As it happens, the dailies involve a nude scene, which embarrasses her parents. Eli specifically tells Nina’s parents that they watched her perform a nude sex scene, which upsets her greatly—and thus he is able to use that emotional reaction from her in the scene she is about to film.

There’s also a great deal of action going on here. We get a lot of scenes of stunt shooting that really have nothing to do with the plot, but are instrumental in helping us understand the world behind the cameras as well as to see the sort of rich fantasy world and union of fantasy and reality that Eli is creating for Cameron. It’s exciting stuff.

Where the film jumps the track is on verisimilitude, though. Too many elements of the story don’t hang together. Why would Eli Cross hire the man responsible for the death of his main stunt man/star’s double? Why would he go out of his way to protect Cameron from the police? How is it that the police can’t see the man they are looking for right in front of them? Even with his hair dyed, he still looks the same.

The Stunt Man gets high marks for its ambition. It tries to do a lot, and I respect it for trying to do something perhaps beyond the scope of the story, director, cast, and crew. In the defense of all of them, the sort of merging of real world and movie fantasy might have been beyond the technology of the day as well, at least for the sort of merger desired here. Because of this, The Stunt Man stumbles a bit, but it stumbles for the best possible reasons. It reached too high and couldn’t seal the deal.

Except for Peter O’Toole, that is. He was always worth watching, and that’s certainly true here.

I think this is worth seeing, but mainly for O’Toole. This is an underseen film in general thanks to distribution problems and long delays (O’Toole once remarked that it wasn’t released—it escaped), but there’s a reason it hasn’t blossomed into having a cult status—it plays too much with the reality it posits, and that kills everything the film is trying to accomplish.

Why to watch The Stunt Man: A surreal look at the film industry.
Why not to watch: It takes a lot of license with believability.