Off Script: Friday the 13th 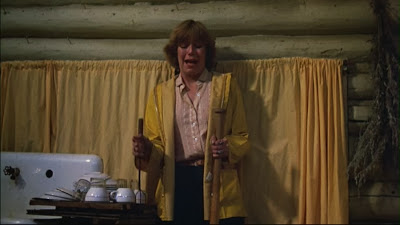 When you prepare to talk about one of the granddaddies of the horror/slasher genre, you need to be careful. Friday the 13th is a film that has a reputation, a following, and a massive amount of influence over the films that follow it. If I’m not properly deferential, I immediately become ignorant of history and genre or someone who disagrees for the sake of disagreeing. Love it too much and I’m just sucking up. As tends to be the case my feelings fall somewhere in between.

This is a film that is short on plot, something it has in common with most slasher movies. The basic premise of the genre is to toss a bunch of young kids into a remote location and start picking them off one by one through a variety of stabbings, slashings, bludgeonings, drownings, and any other form of mayhem the filmmakers can think up. Typically, the killer is unstoppable and the teens are whittled down to a final potential victim, who usually lives. That’s certainly what happens here.

The setting is Camp Crystal Lake, a recently re-opened summer camp. In the past, a camper drowned because the counsellors were too busy knocking boots to save him from the water. A couple of years later, a pair of counsellors were killed while having some alone time. The camp is reopening as the film starts, and the owner, the pervy Steve Christy (Peter Brouwer) is getting it ready with the help of six counsellors and a cook. It’s Annie the cook (Robbi Morgan) we meet first, and she gets us some of the backstory.

Jump forward to the camp itself where we meet Steve Christy and the six counsellors, who are conveniently arranged as three of each gender. It’s not really much of a spoiler to suggest that the three guys, Jack (Kevin Bacon, yes that Kevin Bacon), Bill (Harry Crosby), and Ned (Mark Nelson) and two of the girls, Brenda (Laurie Bartram) and Marcie (Jeannine Taylor) are not going to be leaving Camp Crystal Lake under their own power. No, we’re left with Alice (Adrienne King) as our final girl.

If this next paragraph is a spoiler, too bad. Friday the 13th is a classic of the genre and you’ve had about 35 years to see it. Our killer is not Jason Voorhees (the drowned boy) but his mother Pamela (Betsy Palmer), who appears only in this incarnation of the long series. She has returned to put an end to Camp Crystal Lake for good, and has decided to do this by slaughtering the counsellors with machetes, axes, knives, and arrows.

There’s actually not a ton of blood in Friday the 13th, at least by modern standards. We get a few moments of it, notably the deaths of Marcie and Jack, but for the most part, we see only the aftermath of Mrs. Voorhees’s latest attack. For a film that was rated R, it’s surprisingly tame in a lot of ways. Oh, I don’t think it would get a PG rating today, but it certainly wouldn’t be much that would thrill the average spectator or fan of current horror films.

This is a film that has survived to the current day based on a number of things, a big part of that being its reputation. It is, like it or not, an incredibly influential film for the genre and almost everything that has come after it has owed something to it. Like many films that start or further a genre like this one did, it’s far more tame than the films that follow it. In truth, though, this film borrows a great deal from Bay of Blood, including a few places where this borrowing is shot-for-shot.

There’s no way around calling Friday the 13th a must-see film. The ending has become a classic not just in the genre but in general, but it suffers from what many other films do—the films that have followed it are scarier, gorier, and in many ways better. It simply doesn’t have the staying power that a film like Halloween does because Halloween is genuinely scary and does more than just present use with a parade of half a dozen or so teenaged bodies.

So it’s must-see, but once you’ve seen it, it’s more interesting as an influencer of other films and less interesting as a film itself. Sorry if that bothers you. It’s just the truth.

Why to watch Friday the 13th: It’s a horror classic.
Why not to watch: For all its legendary status, it’s less scary and gory than you remember.