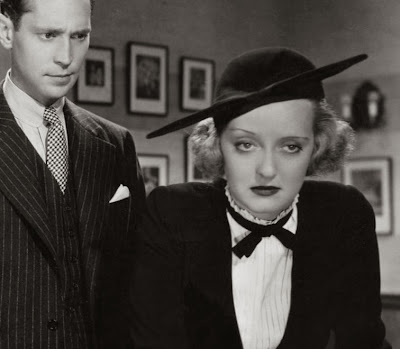 Superstition is an odd thing. I don’t cotton to many of them; essentially, I’m not a believer in the idea that wearing a particular color is lucky or that certain events mean ill favor. Athletes (and many fans) are prone to superstition. So are actors. You’re not supposed to say “MacBeth” inside a theater, since the play is allegedly cursed. Telling an actor to break a leg is a long established traditional belief that wishing an actor good luck is the surest way to curse them. (Incidentally, you should never tell a dancer to break a leg, since it’s a possibility and career-threatening.) Dangerous, which features Bette Davis’s first Oscar-winning performance, explores this phenomenon and lends it a great deal of credibility.

Don Bellows (Franchot Tone) is a promising architect with the world in front of him. He’s mortgaged himself to the hilt to create a set of new estates for the wealthy and he has a pending marriage to Gail Armitage (Margaret Lindsay) to look forward to. Gail is supportive of everything Don does, making her the perfect patsy for the turn at the end of the first act.

One night, Don spots former stage actress Joyce Heath (Bette Davis) wildly drunken and sullen in a dive bar. Once the star of Broadway, Joyce has become a jinx, ruining lives and shows at every turn. Because of this, she’s been off the stage for years. As it happens, Don has a particular fascination with Joyce Heath. He credits a performance of hers with his decision to ditch his planned life and instead become an artist of some sort. Her passion for pursuing her art made him want to do the same thing. He feels beholden to her, and, unable to find where she actually lives, takes her to his place in the country to sleep off the effects of her long night of drinking.

Things progress, and quite naturally, feelings develop between them. Don is torn between his responsible and sensible relationship with Gail and his renewed infatuation with Joyce. He sort of tells Gail about his infatuation and she tells him that she would never be able to marry him in that situation, causing a split between them. Liberated from his previous romantic obligations, Don sinks all of the money he’s borrowed for his new estates into financing a new play starring Joyce. He also demands that she marry him, something she is oddly against. As we spin into the short third act, we discover that Joyce Heath has a number of dark secrets beyond the ones we already knew about.

The third act might well be what saves this film. Before this, it’s incredibly predictable. Actually, the conclusion of the third act is pretty predictable as well, but at least it goes to some interesting places. Joyce’s dark secret isn’t terribly surprising, but what happens because of it is. All told, there are about 15 minutes of really interesting and daring cinema here, while the rest can be seen coming from a mile off. But that 15 minutes is awfully good.

That’s really the biggest issue I have with Dangerous--I knew what was going to happen long before it did for the bulk of the running time. The real reason to watch this is for Bette Davis and not really for any other reason. There are some moments of Davis overacting terribly, but also moments of real subtlety that at this point in her career, she’d already developed quite a number of solid chops. It’s almost impossible to watch anyone else when she’s on the screen here, which allows us to overlook some fairly wooden performances from some of the bit players.

For what it’s worth, Dangerous isn’t a terrible film, but I have a hard time calling it a great one. Davis’s performance may well be Oscar-winning for its year, but it doesn’t hold a candle to most of her others that I’ve seen. It’s still worth watching for her, but it’s far down on the list of Davis performances worth seeing.

I should say something about Franchot Tone, I suppose. He’s fine and less wooden than many of the people in the film. He makes a good foil for Davis, particularly in the third act. I’ve always found Tone to be sort of a non-factor in most of his films. He breaks the surface of the water a couple of times here (particularly in the final 10 minutes), but he’s still kind of an acting non-entity for me, and this film didn’t change my opinion.

Why to watch Dangerous: Bette Davis in her prime.
Why not to watch: It’s predictable in the manner of many a film of this era.