The Sin of Madelon Claudet 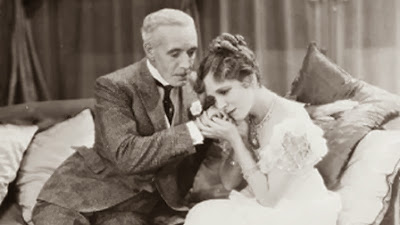 There was evidently a genre of film in the early days in which a woman makes a single bad choice and spends the rest of the film paying for it. Such is the case with The Sin of Madelon Claudet, a film where a rash decision made early in the film leads to continual misery throughout the thankfully short running time. This has all the earmarks of a film destined to appeal to the baser natures of the audience, all about a fallen woman and her various trials and problems.

Young Madelon Claudet (Helen Hayes in an Oscar-winning role) is spirited away from her farmhouse by Larry (Neil Hamilton), an American who she has fallen in love with. The two run off to Paris where Larry attempts to make a go of it as an artist, albeit a pretty poor one based on the work we’re able to take a look at. During their brief affair, Larry receives a cable from home that his father has fallen ill, and he returns to the states, leaving Madelon behind. Once home, he is forced into a marriage to appeal to his parents, leaving Madelon alone to wait for him with her friend Rosalie (Marie Prevost). She’s also pregnant and eventually gives birth to a son she names Larry in honor of the boy’s missing father.

Now with a child, Madelon returns to her father (Russ Powell) in rural France to be married to a man named Hubert (Alan Hale). She doesn’t really want to marry him, and she’s tempted by the offer of an acquaintance named Carlo Boretti (Lewis Stone) to essentially be his mistress. When Hubert balks at the presence of her son, she returns to Carlo, paying Marie and her husband Victor (Cliff Edwards) to take care of young Larry. Madelon lives in the lap of luxury, which all comes crashing down when Carlo is arrested as a jewel thief and Madelon is thrown in prison for 10 years as an accomplice despite knowing nothing of his crimes.

Oh, but it doesn’t end there. Once out of prison, she can’t find work, which leads her to working as a prostitute so that she can pay for Larry’s eventual path into medical school under the direction of a man named Dr. Dulac (Jean Hersholt). She eventually resorts to thievery as well, all to support Larry (Robert Young), who believes his mother to be dead. She keeps her existence a secret because her criminal past may otherwise damage his position.

Of course we end up with something approaching a happy ending. This entire story is told as a flashback from Dr. Dulac to Larry Claudet’s wife (Karen Morely), who was planning on leaving him because he spends too much time with his patients and not enough with her. Oh, but by the end of the film, she has learned the true meaning of sacrifice, thanks to the tragic story of Madelon.

It’s pretty syrupy, and that syrup is laid on with a trowel. This isn’t a terrible film by any stretch, but it’s also not a very good one. It’s not too surprising as I dig back into the earliest Oscar films that the dramas tend to be very much of the “melo” variety—a few years removed from the silent era, this is still the sort of drama that played to audiences. It must have played to the Academy as well, since Helen Hayes walked off with a statue. Today, though, this is a tough film to take.

Storytelling has advanced in film, and sometimes it’s worth it to go back and see where it started. It doesn’t always mean that where it started is good, though. The Sin of Madelon Claudet has its rare moments, but in general, this one isn’t really worth your time.

Why to watch The Sin of Madelon Claudet: A rare chance to see the queen of American theater at her height.
Why not to watch: It’s painted in all the colors of melodrama.