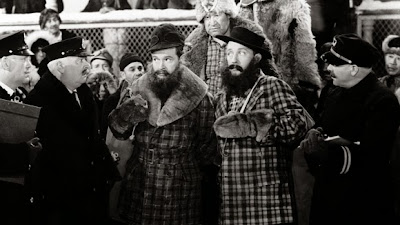 I’m always a little surprised when I like Bing Crosby in a film. I’m not sure why, but I tend to whenever I see him. For whatever reason, he was immediately likeable on screen. Strangely, I have the exact opposite impression of Bob Hope. With Hope, I get it, though. Hope’s persona was as someone who couldn’t keep his hands of the closest woman. I remember vividly having to watch The Paleface for the 1001 Movies List. In that film, his entire schtick consists of staring at Jane Russell’s tits and barking. With Road to Utopia, we get Crosby and Hope, which is curious for me.

This is my first Bing and Bob “road” picture, so I’m not sure if the amount of fourth wall breaks and meta moments are par for the course or not. It wouldn’t surprise me, since that also seemed to frequently be a part of Hope’s schtick. In this case, though, a big part of this are narration breaks from comedian Robert Benchley. He starts the film, in fact, by telling us that the studio hired him to explain the plot, since it doesn’t make a lot of sense. Benchley pops up throughout the film to explain a couple of scenes and make a couple of jokes.

Duke Johnson (Bing) and Chester Hooton (Bob) are vaudevillians working a scam in San Francisco. They are revealed by two vicious killers fleeing from the police. These killers, Sperry (Robert Barrat) and McGurk (Nestor Paiva) have killed an old man and stolen a map for a gold mine in Alaska. This mine actually belongs to Sal Van Hoyden (Dorothy Lamour). She’s told to head to Alaska and look for a man named Ace Larson (Douglass Dumbrille), who turns out to be a crook himself.

Duke and Chester, through a series of mix-ups, end up in Alaska as well, and happen to be on the same ship as Sperry and McGurk. They also end up with the map, and decide that the best way to survive the wilderness is to pretend to be the two hardened criminals. This earns them instant respect (and fear) from the townspeople, but also draws the attention of Sal, who thinks they are the real killers (they aren’t) and possess her map (they do).

I’m not going to spoil this by continuing. It’s not hard to figure that there’s going to be a love story cropping up somewhere and a huge number of fourth wall breaks from virtually everyone in the film. Some of these are very inventive. For instance, while Chester and Duke (mostly Chester) shovel coal to pay for their ship passage, a well-dressed gentleman walks through and gets a light for his cigar. He’s not on the ship—he was taking a shortcut through the studio to his soundstage. These happen frequently, and while some of them fall flat because they’re close to 70 years old, plenty of them are still dead on and dead funny.

From what I understand, the “Road to…” movies were pretty much as depicted here. These are goofs and not meant to be taken seriously. They’re self-referential, make fun of Hollywood and the stars themselves, and aren’t shy about letting the audience in on the gags. We’re supposed to not only supposed to follow along with the story, but follow along with the jokes just as well. And we do, and we’re happy to because we’re in on all the jokes, and the jokes still work.

Surprise, surprise, I even like Bob Hope in this. Bing Crosby is as likeable as he ever is, but Hope is pretty likeable as well. It’s he who does the majority of the fourth wall breaks, although they aren’t exclusive to him. Crosby, in fact, gets the best one. At one point, he precisely repeats a line Hope said a few minutes earlier, Benchley appears and remarks that the line has been used, and Crosby looks at the audience and says that Hope shouldn’t get all the good lines.

The plot is overly complicated, I suppose. It didn’t need to be, but it’s okay because it’s not meant to be taken seriously. It’s farce, and it’s good farce specifically because it does play fast and loose with its own narrative and with the fourth wall.

There’s another “Road to…” picture on the Oscars list and I’m suddenly looking forward to watching it.

Why to watch Road to Utopia: Most of the humor still works pretty well.
Why not to watch: If you don’t like meta, a lot of this will fail for you.