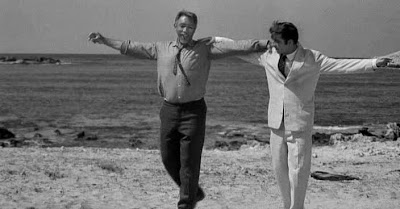 Zorba the Greek is a film I’ve heard about for quite a long time. Heard of it. I knew nothing about it going in except that it starred Anthony Quinn. For years, thanks to this film, I thought Anthony Quinn was Greek. He certainly played a lot of swarthy European types, probably because of his success in this role (for the record, Quinn was Mexican). And so, I figured it was time to watch this. I kind of expected it to be a comedy, or at least to be a sort of Greek Fiddler on the Roof. I’d been led to believe that Zorba the Greek was something life-affirming.

Yeah, not so much. This is actually a pretty dark story in a lot of place. A young half-Greek named Basil (Alan Bates) arrives one day in Greece. He has been a writer but has lost his muse. Seeking to jump-start it, he has come to Crete where he owns a piece of land and a mine, inherited from his father. Along the way, he encounters Alexis Zorba (Anthony Quinn). Zorba is boisterous and seems to enjoy pretty much everything that happens to him. Since he has experience as a miner, Basil hires him to see if he can get the family mine restarted.

The little village in Crete contains a few characters of note. One is the older French woman who runs the hotel where the two initially stay. Zorba, intent on making his new boss a pillar of the community and as happy as possible, suggests he make a play for the old woman. Basil refuses, so Zorba moves in on Madame Hortense (Lila Kedrova) instead. As for Basil, he is intrigued by the presence of a local young widow (Irene Papas). The widow is frequently mocked in the town because she has not remarried, especially since one of the local peasants is in love with her. Eventually, she and Basil attempt to start a relationship, although it appears to be one based mostly on desperate sex, as they do not have a language in common. Eventually, this leads to one of the several tragedies in the film, one that I won’t go into here.

The mine is a failure, but Zorba is undeterred. He has a plan for logging the hillside, but to do so effectively, he develops a contraption to get the logs down the mountain. Basil, rapidly running out of cash, sends Zorba off to get the necessary supplies. Zorba instead uses the money to drink and eat like a king and hang around with a cabaret girl. In revenge, Basil tells Madame Hortense that Zorba has promised to marry her. This ends pretty tragically, too.

Nothing works, though. Everything in this film ends tragically, and I think that’s kind of the point. In a way, because of this, it all feels kind of pointless. We very much end up in the same place we start, although I think a case could be made for some changes to Basil by the end. Despite the series of setbacks, problems, and tragedies, Basil perhaps has learned something about life and perhaps has learned to enjoy himself a little more than he did before he arrived. I suppose there’s an indication of this, but it feels like a long way to go to get there.

I guess I don’t really understand what the point of the film truly is. It seems like a series of random, terrible events that affect Basil deeply but that Zorba manages to get through without it affecting much in the way of his disposition. Zorba is more or less a force of nature or a large stone—he simply endures without much of anything changing him. Basil, for his part never really understands Zorba, Crete, or the peasants.

I very much wanted to like this. I went into it expecting to like it, and there were definitely parts that I appreciated. First off is Anthony Quinn, who owned this film completely. When he’s on the screen, there is nowhere else to look. There’s a reason that he was typecast into this sort of role, and that’s because he plays it perfectly. If nothing else, the film works primarily because of him.

It’s also beautiful to look at. It’s beautifully made in the sense that the scenery is perfectly shot. The small village is a combination of the ancient world and poverty, which makes it both terrible and charming.

Third is the music and the dancing. Right now, in your mind, picture a line of Greek men dancing. Pay attention to the music in your head. You’re seeing Zorba’s dance and you’re hearing the music from this film, I can virtually guarantee it. This is the film that made that song famous and made that dance famous. It’s catchy, and it’s so familiar that I’d be surprised if it didn’t bring at least a wisp of a smile to your face.

But the film won’t. It just won’t.

Why to watch Zorba the Greek: The seminal performance of Anthony Quinn.
Why not to watch: It’s a long stretch of depressing instances.