This is the third in a monthly series of reviews suggested by Nick Jobe at YourFace. 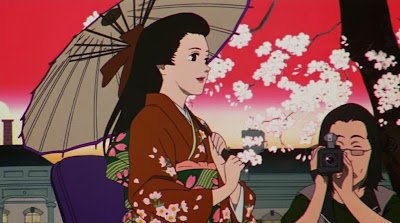 With my third selection from Nick’s list of films, I’ve been given something of a poser. I genuinely attempt to go into every film with the anticipation or at least the hopes of liking it. This was certainly the case with Millennium Actress (Sennen Joyu). On the other end of it, I’m left with a complete puzzle. Did I like it? Hard to say. There are definitely things here worth your time. Did I understand it? Almost certainly not. It’s an interesting film nonetheless and I don’t feel as though my time was wasted on it. I should probably watch it again.

I’ll make this as simple as I can. A movie studio is being torn down. One of the former employees, Genya Tachibana (Shozo Iizuka) and his cameraman Kyoji Ida (Masaya Onosaka) head out to locate one of the studio’s former stars. This star is Chiyoko Fujiwara (voiced at different times by Miyoko Shoji, Mami Koyama, and Fumiko Orikasa), who after a long career suddenly vanished and went into hiding. Genya wishes to see her to make a documentary about her life and for personal reasons. He manages the interview by promising Chiyoko something from her past.

This item from her past is a key. Upon seeing it, Chiyoko begins to tell the story of the key and of her life. Early in her life, she met a radical artist who was on the run from authorities. She kept him safe for a night and he gave her the key, promising that he would tell her what it opened the next day. However, when she returns to him, she discovers that he has left. Chiyoko has simultaneously received an offer to be in a film. She takes the offer with the hope that her becoming prominent will allow the young artist to track her down.

That’s simple enough, right? But the artistry in Millennium Actress isn’t in the tale, but in the telling. As Chiyoko relates the story of her life, we move into her films and her past. This is more than simply a flashback, because both Genya and Kyoji appear as direct witnesses of these flashbacks. Eventually, Genya becomes an active participant in her past and her movies, both real and idealized through the lens of the films she is remembering. There is no distinction between current reality, movie, past, and what is potentially fantasy for Chiyoko, her guests, or for us as the audience.

What this means is that at any time in the film, we could be witnessing one of Chiyoko’s past roles, something that happened in her life, or a combination of the two. Frequently, encounters that can only make sense as actual events are shown to us in the period costumes of Chiyoko’s film roles. This blending of reality and fantasy makes it difficult to fully understand exactly what is going on at any point in the film.

Fortunately, while this is frustrating, it never becomes so frustrating that it’s worth giving up. Millennium Actress benefits greatly from being gorgeously animated and drawn. This is a film that, if the story weren’t any good, would still be worth looking at in still images because of the amount of detail in the backgrounds and the simple beauty of the artwork presented to us. Fortunately, there’s enough story worth watching here that paying attention has dividends beyond simply the beauty of what is on screen.

I don’t know that I’m ready to say that I liked Millennium Actress. I’m more than willing to say that I respect what director Sataoshi Kon was trying to accomplish. Kon’s work has been cannibalized in the past by no less a luminary than Darren Aronofsky, and my feelings about this are similar to those that I have about many an Aronofsky film. It’s difficult for me to “like” his work even while I’m happy to have seen his films and am ready to state that he’s one of the best filmmakers currently working.

If I had to sum up Millennium Actress in two words, I think they would be “confusingly beautiful.” It’s a film that I am certain I will eventually revisit, and perhaps with another viewing or two I will be able to better express what I really want to say about it. For now, I’m going to have to leave it as something that I greatly respect and admire, even if I can’t bring myself to say that I enjoyed the film. I enjoyed the experience of trying to work it out. That’s going to have to do for now.

Why to watch Millennium Actress: It’s captivating and beautiful.
Why not to watch: It’s difficult to understand.