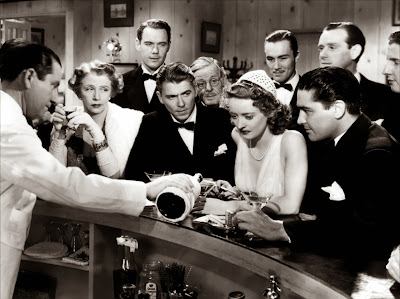 When I started watching films seriously, I wasn’t much of a Bette Davis fan. I didn’t understand the appeal. One of the things I’ve taken away from the last several years is that my opinions have changed a ton, and being a Bette Davis fan is one of those changes. I do love me some Bette Davis. When she’s good, and she almost always was, it’s hard to think of anyone better. The biggest hole in my Bette Davis filmography was Dark Victory until tonight. This is one of Davis’s better films and one of the more interesting films of 1939, which is saying something when considering how many great films came from that year.

Judith Traherne (Davis) is a spoiled rich girl who spends her days with her horses and partying with her friends. She’s been having headaches, though, and one day while riding a horse she hopes to turn into a steeplechase champion, she takes a tumble. A fall down the stairs leads to her being dragged to the doctor by her best friend Ann (Geraldine Fitzgerald). Her regular doctor, Dr. Parsons (Henry Travers) can’t make headway, so he takes her to a brain specialist named Dr. Frederick Steele (George Brent). A few tests and some worried looks later and we learn that Judith Traherne is suffering from a malignant brain tumor that requires immediate surgery.

The surgery is a success in that Judith survives, but not a success in the removal of the tumor. It’s assured by every doctor who examines the results that Judith’s tumor will return and will be fatal within the year, albeit without much in the way of symptoms or complications. The general consensus is that she’ll experience blindness shortly (as in hours) before the end finally comes. Steele and the others decide that the best course of action is not to tell her that her doom is impending. All of this is made much more complicated by the fact that Judith has fallen for her doctor and he reciprocates her feelings. She discovers her eventual prognosis, though and instantly rebels against her doctor and everyone else, deciding to shove as much life in her final few months as she can.

Toss in drunken playboy Alec (Ronald Reagan) and horse trainer Michael O’Leary (Humphrey Bogart) who has yearned after Judith from afar since he met her and you’ve got quite the tragic film. There’s a lot going on in the running time. In a sense, it’s almost as if the film tries to cram in as much life into its 104 minutes as Judith tries to cram into her final months of life.

There are a number of things that work both for and against the film here. The best part of the film is unquestionably Bette Davis. This is one of her better performances in a career filled with them. There are moments where the overacting is still reminiscent of the age, but it’s almost forgivable coming from Davis because there are also moments of real, genuine pathos here. She gets better as the film goes on. Initially, when she’s the headstrong Judith who doesn’t want to go to the doctor, it’s too much. When she comes to realize her death is inevitable, her mania becomes realistic and completely believable.

As much as this feels strange to say, I think this is the first film I’ve seen with Ronald Reagan. He makes an interesting drunk and plays the role pretty well. I’m mildly surprised at how high his voice is.

The weaker moments come, surprisingly, from Humphrey Bogart. I’m a fan of his, but he can’t hold an accent worth a damn. He’s much more at his best when he’s just talking the way he talked instead of trying to come across sounding like he was born and raised in Ireland. I didn’t realize he was even attempting an accent until his final major scene when it comes across in a couple of lines and just as suddenly vanishes. I also don’t buy George Brent as a romantic lead. I know the little mustache was in vogue, but it doesn’t look right on his face. I’m having difficulty putting my finger on exactly what doesn’t work about it. I think it’s that he always seems to look out of his depth no matter what is going on on screen.

But all of that is okay, because this isn’t about George Brent or Humphrey Bogart, but about Bette Davis and what she could do with a role. While she didn’t win the Oscar, she unquestionably deserved the nomination, and she’s the single reason that this was nominated for Best Picture. For me, the best part of this is seeing Bette Davis in the last half hour, trying to simplify her life and living only for what is most important. It’s so against how I tend to think of her, and shows more than anything else that she was a woman of enormous talents.

If you have an eye for the classics, you could do a hell of a lot worse than Dark Victory. Just have a hankie or five ready.

Why to watch Dark Victory: You shouldn’t pass up a chance to see Bette Davis at her best.
Why not to watch: Three hankies don’t cover it.