One Hundred Men and a Girl 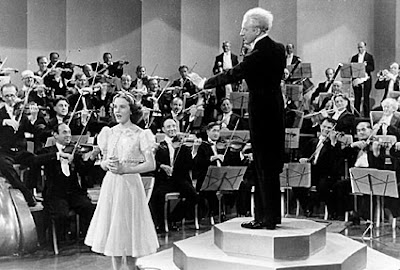 Frequent readers here may have noted that I get a lot of the movies I watch from a variety of libraries. Every now and then I request a film through interlibrary loan and it pops up in the form of a VHS tape. I no longer have a working VCR, which means that when I get a tape, I have to find a different way to view it. Fortunately, I can sometimes find a spare classroom and project the movie on a screen. As it happens, One Hundred Men and a Girl is one of those rare VHS films. It’s been sitting on my desk for a week or two waiting for me to get to it. Tonight, I finally got the chance to watch it.

I wasn’t really looking forward to this one, although I was pleased to note that it was really short. So I put it in and started to watch. It’s not a terrible film. It’s just not a great one. It seems like something far too lightweight to be considered for something like Best Picture. The story seems pretty textbook for the mid-1930s. It’s a baby step away from Mickey Rooney and Judy Garland getting the gang together and puttin’ on a show.

John Cardwell (Adolphe Menjou) is an out of work trombone player desperate to land with a local orchestra conducted by the great Leopold Stokowski (playing himself). He can’t get more than a word or two in before he gets tossed out of the theater. Outside, he discovers a dropped purse which he takes home. He uses some of the money inside to pay his back rent, and lies to his daughter Patricia (Deanna Durbin) about landing the job. She learns very quickly that he was lying, though, and she goes to return the purse to the woman who lost it.

It turns out that the purse was lost by a wealthy woman named Mrs. Frost (Alice Brady), who is married to John Frost (Eugene Pallette), the owner of a local radio station. Mrs. Frost, lost in her own society world, is enchanted by Patricia after hearing her sing and loosely commits to sponsoring an orchestra. She never really intends to do so, but Patricia runs home to her father and tells him the news. Dad arranges practice space and contacts a group of out of work musicians and they start practicing.

Along the way, we get a lot of music. Much of this is orchestral music and it’s really very good. It seems to me that this music is possibly the main reason for creating the film in the first place. A few of those numbers feature Durbin singing, and I was far less interested there. I won’t deny her talent, but I’m not too keen on the style.

I mentioned at the start that this film is akin to films like Babes in Arms where a collection of kids put on a show to prove themselves or rescue the theater or whatever. There’s definitely a sense of that here and every bit of it comes from Deanna Durbin. Patricia Cardwell is the sort of character wholly defined by terms like “pluck” and “inability to sit down.” That’s certainly an artifact of when the film was made. I’ve never felt that these characters carry over well into the modern era, and that’s exactly the situation here.

One Hundred Men and a Girl isn’t a bad film. It’s not, but it’s also not that great. It’s worth seeing specifically because of the music, and I give a lot of credit to the performance of Adolphe Menjou. Menjou makes John Cardwell easy to feel sympathy for in no small part because he’s about the only character here who isn’t played as a broad stereotype. Everything else in this aside from the music is boilerplate. That’s always a little disappointing.

Why to watch One Hundred Men and a Girl: The music’s good.
Why not to watch: It has not aged well.