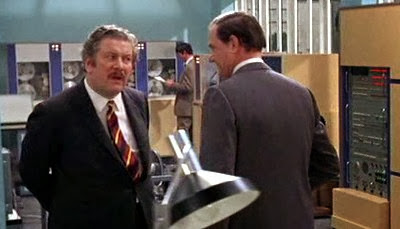 There’s something in most of us that enjoys a crime film. I don’t know if it’s because we enjoy seeing the rich and stupid get fleeced or if we enjoy seeing the clever crooks attempting to doing the fleecing. This is especially true of con games. There’s a perverse pleasure in watching the con happen and seeing all of the pieces fall into place. There’s a reason that most con game films are either overtly or are at least partly comedies. Hot Millions is overtly a comedy. It’s a very British comedy, one that requires some effort on the part of the audience to find the funny. It’s rarely laugh-out-loud and much more content to go for a smirk and chuckle.

Marcus Pendleton (Peter Ustinov) has served his time in prison for embezzling, making himself useful doing small services like taxes for the warden. His career as an embezzler came to this temporary halt thanks to his being tracked down by a computer. Rather than causing him to decide that his chosen career is too risky, Pendleton decides that his best option is to understand just enough about computers to fool them. Bluffing his way into a private club, he tracks down a lead on a computer expert named Caesar Smith (Robert Morley). Smith, approaching retirement, has always had a dream of writing the definitive book on moths of the Amazon. Pendleton convinces him to do so, and usurps the man’s identity.

Under this new identity, complete with impeccable credentials, Marcus Pendleton becomes Caesar Smith and lands a high-ranking job at Ta-Can-Co, a corporation with goals of, as stated by executive vice president Carlton Klemper (Karl Malden) of owning significant pieces of the world. The newly minted Caesar Smith (and he’s just going to go by this name for the rest of the review) is hired on the spot when he spots an error in the computer work of the awesomely named Willard Gnatpole (Bob Newhart).

It takes him a while to break the code and the programming language of the new computer, but once he does, Caesar hits upon a nearly perfect scheme for embezzling. Essentially, he has the company write a series of checks to dummy corporations that Caesar himself has set up across Europe. He pays a small amount of rent to businesses in Paris, Rome, and Berlin merely as places to send the checks. He then balances the books by funneling money from other parts of Ta-Can-Co to cover the checks.

During all of this, a new secretary is hired for him. This is Patty Terwilliger (Maggie Smith), who has proven incompetent in virtually every job she has ever had. She also happens to live in the same boarding house as Caesar. Willard Gnatpole falls for her shapely legs despite her lack of secretarial skill, and so too does Caesar. Eventually, she and Caesar get married, she gets pregnant, and all of this forces Caesar’s hand. Now, with a family to support, he needs to figure out a way to get out of the embezzling business, collect his profits, and bolt. Naturally, just as he’s doing this, Willard Gnatpole is starting to close in on him.

Hot Millions is a difficult film to judge in certain respects. It’s quite definitely a comedy and bills itself as such, but it’s not (as mentioned above) filled with moments of laugh-out-loud humor. It’s far more cerebral and subtle. There are some excellent moments, and is almost perfectly cast in the main roles. Peter Ustinov is completely believable as a man with a streak of larceny and just enough bravado to get himself into places where he shouldn’t be. Maggie Smith is completely charming as his mildly ditzy and incompetent secretary. Karl Malden is almost always good, and here he’s great. But it’s Bob Newhart who steals every scene he’s in. This is the perfect role for him, allowing his mildly stuttering delivery and deadpan tone to carry a hint of comedy in everything he does.

It’s interesting to see this in context of British crime films. It’s a natural progression from Ealing comedies like The Ladykillers and The Lavender Hill Mob. It follows a lot of the same basic ideas of the Ealing films, but adds a bit of sex and a bit of technology to the mix. It’s a short step from here to later comedies of a similar vein like A Fish Called Wanda. It’s also a natural parent to non-British crime comedies like the remake of Ocean’s Eleven.

The main reason that Hot Millions works, though, is because Caesar Smith is the perfect mix of genius and bumbler. We can see all of the cracks in his scheme and all of the holes in the patter he throws out to keep others from seeing through what he’s doing. He’s perfectly imperfect, and that makes him relatable and human. He’s also just audacious enough to be someone we can grudgingly admire, at least a little bit.

But beyond him, it’s the twin presences of Maggie Smith and Bob Newhart who make this film what it is. Both are brilliant in every scene. Maggie Smith is the perfect combination of prude and sex kitten. She’s blatantly sexy, but the character is so unconsciously—she’s unaware of her own sexual power, which makes her more fun. Bob Newhart plays Gnatpole with just enough annoyance to make him unpleasant for Patty and with just enough misplaced confidence to think he’s still got a chance at her even after she’s married.

This was a lot of fun. I’m glad I got to see it. If you can track it down, you can do a lot worse for a film that combines our typical love of larceny with a little light comedy, even if the ending is a bit too twee.

Why to watch Hot Millions: It’s smart, and it has Maggie Smith and Bob Newhart in perfectly cast roles.
Why not to watch: The wrap-up is cute, but goes on too long.