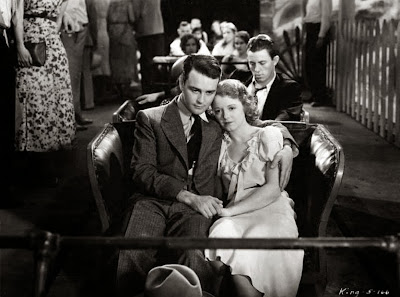 This is the story of the Frake family. Father Abel Frake (Will Rogers) spends a good deal of the film obsessing over his prized hog Blue Boy. Abel’s entire time at the Fair is all about tending to his pig and the rather unusual ailment that the pig seems to go through. Essentially, Blue Boy is lovesick over a sow also at the fair. When she’s in a nearby pen, he’s fine. When she’s not, he rolls over onto his side and becomes listless.

Mother Melissa Frake (Louise Dresser) spends her time at the fair obsessing over her three varieties of pickles and her mincemeat. It’s the mincemeat that concerns us immediately. She objects to pouring in brandy even though it’s the brandy that makes it taste right. While she’s not looking, Abel pours in a healthy dose. After Abel leaves the room, Melissa pours in her own liberal dose. Naturally, this makes the mincemeat as good as can be hoped for.

Before I move on to the Frake children, I want to mention the rather disturbing scene of the pickle and mincemeat judging. While Melissa and her daughter stand watching the judges, we get an extended sequence of the judges sucking audibly on pickles and smacking their lips noisily over the mincemeat. I’m not a squeamish person, but the sounds of other people eating really bother me a lot. I’m guessing this was played for comedy, but I found it horrifying. This is particularly true of one judge whose time with the mincemeat reminded me of nothing so much as a cow smacking it’s giant fleshy lips over a particularly ripe bit of grass.

Anyway, it’s fortunate that we don’t spend a great deal of time with the Frake parents, instead opting for the bulk of our adventure to be spent hanging around with son Wayne (Norman Foster) and daughter Margy (Janet Gaynor). Both of them have sweethearts in their little farm community. Margy’s boyfriend Harry (Frank Melton) is starting to talk seriously about marriage, but he can’t go to the Fair because of his dairy cows. Margy is either non-committal or just playing hard to get.

Anyway, the family goes off to the Fair and immediately things happen in the romantic lives of Wayne and Margy. For Wayne, the original point of the Fair was to get back at one of the midway game keepers (Victor Jory) who ripped him off the year before. His prowess with the ring toss attracts the attention of the carnival’s trapeze artist Emily (Sally Eilers). The two become an immediate item and it’s heavily implied in dialogue that the two of them are spending nights together.

For Margy, love comes in the form of Pat Gilbert (Lew Ayers), a newspaper reporter from the Des Moines register. The two fall hard for each other even though Pat admits to her that he’s something of a player in the modern sense; he refuses to take her to the newspaper exhibit because of what the other people there will say about her. Evidently, his reputation sullies anyone who comes near him. Such is the nature of the Fair that romance blooms, grows, and dies in the space of the week that the family is there.

So all of this seems like a pretty good set up for a film. Sadly, it’s kind of not. State Fair isn’t terrible, but it’s very much in the vein of the overacting of the era. Particularly egregious is Janet Gaynor’s Margy. Her meet cute with Pat comes on the roller coaster, which is old school in the sense that there are no seat belts or restraints in the carts. At the top of the first hill, Margy panics and stands up in the car, which force Pat to pull her back down into her seat. Later, the two of them go watch a harness race. Margy acts like she’s never seen a horse run before.

Why to watch State Fair: How many chances do you have to see Will Rogers?.
Why not to watch: It’s pretty dumb.