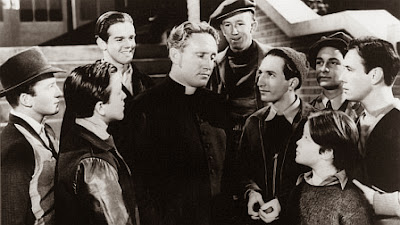 I’ve mentioned WGN and Family Classics here before, and Boys Town is another film that showed up there at least once a year. It’s been years since I’ve seen this, but it’s also probably the sixth or seventh time I’ve seen it and the first time as an adult. I remembered a few key points but also forgot huge swaths of it, which is the primary reason I rewatch everything for this blog before posting about it.

Boys Town tells the story, partly realistic, of Father Flanagan (Spencer Tracy), a Catholic priest, who is called to a prison in the moments before a prisoner is put to death. He offers an impassioned speech about why he went bad, citing mostly the state homes he lived in as a child. This sparks something in Flanagan; when he returns home to Omaha, he immediately encounters a group of boys getting in trouble. At this point, Flanagan has run a home for transient men (read: hobos), but decides, based on the speech of the doomed prisoner, to switch his focus to the young. With the assistance of a local merchant, Flanagan buys a house to keep a group of boys under his protection and tutelage. Eventually, so many boys show up that Flanagan buys a large tract of property and creates an entire town run for and by the boys.

As a place, Boys Town is very much a real town, with a post office, mayoral elections, and everything else a town has. The boys run it themselves with Flanagan overseeing, and it appears that the experiment works in general. The boys thrive in their town, and those who eventually grow up and leave become productive members of society. Many of the locals don’t believe in the project; in particular, Flanagan has trouble with many of the Omaha papers.

Eventually, Flanagan is called to a prison where he meets up with convicted felon Joe Marsh (Edward Norris). Marsh wants his brother Whitey (Mickey Rooney) to be taken in hand, and offers a couple of hundred dollars to help sweeten the deal. Unwilling to turn any boy away and desperate for the money, Flanagan accepts and takes Whitey in hand. Whitey is the original wannabee punk, a guy who talks bigger than he can actually act. He’s brash, rude, and finds himself ridiculously funny even if no one else does.

There’s friction right away. Whitey doesn’t like the structure of Boys Town and considers leaving. He stays though, deciding that perhaps it would be better to change the organization form within. This means running for mayor, something Whitey takes to immediately. When the election doesn’t go the way he wants, things get ugly quickly. This is compounded by the reality that Whitey’s brother Joe has escaped from prison and is forming a new gang.

Spencer Tracy is the warn, gooey heart of this film. He plays Father as a man determined to do the right thing no matter the costs. I was pleasantly surprised at how small of role religion plays in the film. I expected a great deal more of the pounding away of theology throughout. Instead, despite Flanagan’s connection to the Catholic Church, the entire film aside from a few short places is almost completely secular.

This brings us to the biggest issue the film has: Mickey Rooney’s over-the-top portrayal of a young criminal in the works. Whitey Marsh is supposed to be trouble, and he is, but in real terms, this means that Rooney plays him as a caricature of Cagney at his campy best. It’s less that Whitey is a young punk and thug and more that Whitey is a cartoon character from start to finish. It’s not even that this is a product of the time Tracy’s performance is nuanced and subtle while Rooney is about as subtle as an attack of whooping cough or a mallet to the face.

This is especially true in the case of Pee Wee (Bobs Watson). Pee Wee is sort of the mascot of Boys Town, a very young boy who lives there and is immediately swayed by Whitey’s dubious charms. When Pee Wee tries to run after Whitey at one point, he is clipped by a speeding car. The resulting reaction from Whitey Marsh is a waterworks performance worthy of Niagara Falls. Everything Whitey does is an attempt to be larger than life. That might work for the character, but it doesn’t specifically work as Rooney plays it.

I think I want to like Boys Town more than I actually do. It has its heart in the right place, but it ends up far too melodramatic for me. Tracy is worth watching (as always), but the rest, while based on reality, is just too extreme.