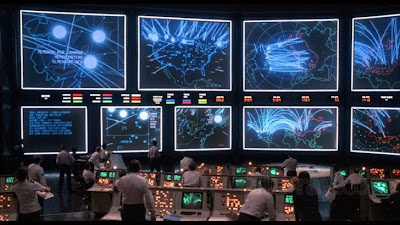 I made the conscious decision not to introduce my kids to WarGames today. I did this for the simple reason that I didn’t think they would really understand it. I know that Russia is resurgent these days and who the hell knows what’s going to happen in the Ukraine, but the geopolitical realities of the 1980s were very different than they are today. I think you needed to be alive in the 1980s to really grok WarGames or at least have a very deep understanding of the Reagan years to get it at any level. This is particularly true of the technology. I mean, my kids have the equivalent of a laptop computer in their phones. The computers in this movie are the size of rooms.

David Lightman (Matthew Broderick) is the complete stereotype of a disaffected, computer-obsessed nerd, save the fact that he looks like 1983 Matthew Broderick and his pseudo-girlfriend Jennifer (Ally Sheedy) looks like a 1983 Ally Sheedy. He’s bright, but also constantly in trouble in school. One day, after poking around in the school computer to change his grades (and Jennifer’s grades, too), David finds his way into an unlisted computer system that happens to be the backdoor of NORAD. He finds a series of games to play including one called Global Thermonuclear War. Since that sounds like fun, he starts up a game not realizing that the computer doesn’t really know the difference between simulation and reality.

What David doesn’t know is that shortly before his involvement in the back end of NORAD’s computer, a series of tests revealed that roughly a quarter of the men sitting in the silos with the launch codes would not turn their keys. This seriously damages the calm of McKittrick (Dabney Coleman), who puts into place a program that gives the NORAD computer direct control over the launch codes. This is against the wishes of General Beringer (Barry Corbin).

Of course, David’s tinkering is eventually figured out and he gets dragged off to NORAD and suspected of espionage. Eventually, the developer of the original system, now a recluse living on his own in the wilderness of Oregon is called in. Falken (John Wood) has become despondent and convinced that thermonuclear destruction is inevitable, and can’t really figure out why anyone would want to stop the machine from eventually blowing up the world.

Few movies made being a computer geek even remotely cool the way WarGames did back in the day. But that’s not really the sell here. What makes the film work is actually pretty difficult to define, but that something is inexorably tied up with life in the early Reagan years. It’s not an exaggeration to say that my friends and I, back in the day, didn’t discuss what we would do “if” a nuclear war happened. We talked about what we would do “when” it happened. As far as we were concerned, living in the shadow of Chicago meant our destruction was inevitable, and we wanted to prepare for what would eventually happen.

WarGames trades on that fear, and without that conscious fear, I’m not sure the film works as well as it once did. It manages to keep the tension pretty high throughout, but even this seems somehow toned down with the ancient technology. There are moments that go far beyond reality, like David’s escape from his confinement at NORAD and what appears to be a general lack of pursuit of someone suspected of espionage, but again, this was a different time and perhaps I’m misremembering the sort of security procedures that were available in the 1980s.

Regardless, this is a smart script. Little things happen early on that come to play in interesting ways later in the film. Looking to impress Jennifer, David hacks into Pan Am’s computer and places a reservation for them to fly to Paris. Later, when being questioned, the fact that he has airline tickets reserved for leaving the country makes his actions look extremely suspicious. Inclusions like this are very smart and help make the film work.

For the movie, it’s a shame that the world has changed as much as it has. The world that WarGames depicts is long gone, and the population that can genuinely understand exactly why things in the film work exactly the way they do and why people act the way they do is, generally speaking, no longer the generation that’s writing about films. Perhaps I’m wrong in this, but I’ve been burned too many times showing films like this to my kids and having them finish the movie staring blankly at me to think that this one would fly with them. I think that’s generally the case. If you’re not already in your mid-30s, my guess is that WarGames will be little more than a curiosity. If you’re old enough to have real memories of the Reagan years, this is an interesting time capsule.

Why to watch WarGames: It’s a good reminder just how close on a knife’s edge we stand.
Why not to watch: It didn’t age very well.