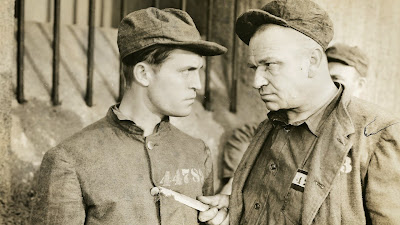 I suppose there are enough prison films that it forms its own subgenre. It’s not one I think of a lot, except to say that in my world, the best prison films are military prison films. A significant percentage of the great World War II films are set in prison. I’m less apt to get all excited when the prison in question is one for hardened criminals The Big House is one of the first films to show life in prison. According to the story, authoress Frances Marion spent time visiting San Quentin to get a handle on the dialogue and endured all manner of verbal abuse from the inmates and the guards both. In truth, that might actually be a better story than what we’re given on the screen.

Kent (Robert Montgomery) is sent away for 10 years for manslaughter, having killed a man in a drunken car accident. Kent is, as many of us would be, not really suited for prison, and things are immediately made worse when he’s housed with hardened killer Butch (Wallace Beery) and professional thief Morgan (Chester Morris). Butch tries to take advantage of the new fish, but Morgan appears to have something approaching a heart and looks out for the new kid. This doesn’t change the reality that Kent finds himself drawn to Butch and distrustful of his new guardian angel. Admittedly, a big part of Morgan’s heart growing three sizes is Kent’s attractive sister Anne (Leila Hyams).

Butch, who is belligerent by nature, is eventually sent to solitary for inciting a tame riot in the mess hall. Before he’s dragged off, he slips his shiv to Kent, who then hides the knife in Morgan’s bed. This is bad news for Morgan, who was on the verge of parole, and has this pulled with the discovery of the knife. This infraction gets him sent to solitary, too, and when he gets out, he both vows revenge on Kent and breaks out of prison by switching places with a corpse. Once out, he tracks down Kent’s sister Anne. As can only happen in the movies, Anne doesn’t turn him into the police. She even gives him back his gun. And, of course, this all leads him to the point of wanting to go straight.

Of course, Morgan is eventually recaptured, but since we now have a love story, we need redemption for Morgan, something to happen between Morgan and Kent, and something like reconciliation between Morgan and Butch, too. All of this has to happen in the third act, and with a film this short (Morgan breaks out with slightly more than 30 minutes left), that third act needs to be rushed.

Despite this, the third act is by far the best part of the film. When Morgan is returned to prison, he discovers that a massed prison break is in the works with Butch at the helm and Kent ready to help out. Unbeknownst to Butch, Kent has already spilled the plan to the warden (Lewis Stone). When the plan immediately goes bad and Butch figures out that the guards were ready for him, he immediately suspects Morgan. As it happens, Morgan didn’t tell anyone, but he still acts against Butch’s wishes. As Butch demands he be released, tossing out a dead guard at regular intervals, Morgan locks the door where the guards are stashed and runs off with the key, preventing the continued slaughter.

While all of this is going around, there is the sort of mayhem you can only get in a pre-Code film like The Big House. The prison guards are armed with mounted machine guns while the prisoners arm themselves with anything they can, which includes a few machine guns of their own. There’s carnage and disaster aplenty. I was surprised at the death of the prison guard, not that it happened but that it happened as callously as it does.

I didn’t think much of The Big House through the middle of it. It starts well and ends very well, but the section in which Morgan escapes and falls for Anne feels very much like it was put in place specifically because a movie couldn’t be made in this era without having some sort of romance in it somewhere, no matter how cobbled in and no matter how tangential to the plot. It may have been necessary for the time, but it weakens the whole film to have this soft, squishy middle.

It’s also interesting to me that Wallace Beery was nominated for Best Actor for this and not Chester Morris, who becomes the main character after the first 30 minutes or so. Morris runs a nice line between hardened criminal and a man wanting to turn his life around. There are many moments where, after determining that he wants to go straight, he still relies on the same ideas and mindsets that got him arrested in the first place. Beery, on the other hand, need only play a thug. He does it well, but there’s not much in the way of nuance here.

So what we have with The Big House is a decent first act, a soft and weak second act, and a surprisingly exciting third act. On balance, I suppose I liked it fair enough, but it would be far better with the pointless romance dropped. Hey, two parts out of three ain’t bad.

Why to watch The Big House: One of the first great prison dramas.
Why not to watch: Did we really need a romantic subplot in a prison film?