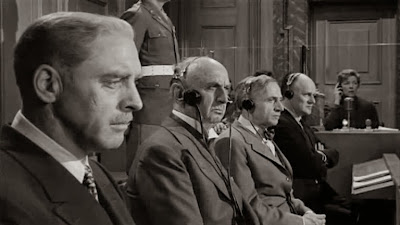 There are a few films out there that are a wet dream from a casting perspective. Judgment at Nuremberg is just such a film. Seriously, Stanely Kramer must have conspired with the devil to assemble these people in one place. Take a deep breath: Spencer Tracy, Maximilian Schell, Montgomery Clift, Judy Garland, Marlene Dietrich, Richard Widmark, and Burt Lancaster, four of whom nabbed Oscar nominations for this film. For fun, you also get early big screen appearances of Werner Klemperer and William Shatner. Holy shit, but that’s a cast that would make any director of the day drool.

The film takes place in the years following World War II, when various members of the Third Reich were put on trial for war crimes. In the film’s present day, the big trials are over and the surviving members of the Nazi brain trust and military have been dealt with. What remains are the civil servants, officials, and in the case of this film, judges who sentenced people cruelly, unfairly, or with malicious intent. American judge Dan Haywood (Spencer Tracy) has been sent to Germany to preside over the case of four judges. His appointed assistant, Captain Harrison Byers (William Shatner) gets him settled in and we jump right into the case.

The four judges are initially arraigned and we soon discover that two are relative non-entities. The two who are important in terms of the plot are Emil Hahn (Werner Klemperer), who has no remorse for his various cruel and terrible judgments and Ernst Janning (Burt Lancaster), a judicial scholar who believes that he is not truly under the jurisdiction of the tribunal. The four judges are defended by Hans Rolfe (Maximilian Schell) and aggressively prosecuted by Colonel Tad Lawson (Richard Widmark), who appears to have not just a legal case but a personal grudge against the four men.

As the case progresses, Judge Haywood meets Mrs. Bertholt (Marlene Dietrich), a former member of the German upper class fallen on hard times. The main reason for her social fall is the execution of her husband, a military leader, killed by the court for war crimes. There is some evident attraction between the two of them—he is a widower just as she is a widow, and both are facing the prospect of lives ending alone.

The case itself is an interesting one. What Colonel Lawson lacks in finesse, he makes up for in pure aggression and vitriol against the four defendants. Rolfe is much smarter, allowing Lawson to make particular statements, about forced sterilization, for instance, and then countering with statements from American Supreme Court justices about enforced sterilization procedures that offer the precise opinion that Lawson finds so patently offensive. Rolfe’s position is to use every legal trick he can to show that his clients may have acted in ways that would be considered immoral, but that upheld the legal situation in German at the time. While crimes may have been committed, the crimes were not of these men, who held to the legal strictures they were forced to enact.

The two cases we spend the most time on are the enforced sterilization of a worker named Rudolph Petersen (Montgomery Clift) and a case where a Jewish man was executed under miscegenation laws for consorting with a young non-Jew named Irene Hoffman (Judy Garland). In both cases, Rolfe seeks to show that the judges in the cases were enforcing laws put on the books by German legislature and were thus not liable for the consequences of those actions. He argues particularly vehemently in the case of Irene Hoffman, who denies any sexual contact with the man in question, but admits to talking with him and even kissing him since she looked upon him as a father figure. Both Clift and Garland were nominated for supporting roles despite both being on screen for a very short period of time. Both are brilliant despite, and perhaps because of the physical and emotional degradation both had experienced in real life.

Where Judgment at Nuremberg truly succeeds is in raising the very difficult moral questions of this particular trial. Are the judges liable for passing required sentences for laws already on the books? It’s a subtle but important variation of the “I was just following orders” defense used by many at the actual Nuremberg trials. In this case, though, Rolfe’s argument is that the judges were bound by the laws they had agreed to uphold and were thus unable to do anything but mete out the punishments required by those same laws.

This is made further complicated by the realization part-way through the film that the Soviet Union has moved to capture various territories in Eastern Europe, forcing the Berlin blockade and the airlift. Because Germany will be necessary to the protection and survival of greater Europe, there comes tremendous pressure on Judge Haywood to pass lenient sentences on the four men, even the unrepentant Emil Hahn.

Judgment at Nuremberg succeeds in the main because it is a smart film, the sort of smart that many films skip over, going for easier answers. The difficulty of the questions asked are what makes this worth watching for anyone. It is a bit long and there are parts, like the relationship between Haywood and Mrs. Bertholt that could probably be excised without much loss. Still, it’s a very fast three hours.

Courtroom dramas don’t get much better. Even William Shatner is surprisingly un-campy throughout and gives a more than creditable performance.

It’s worth noting that Maximilian Schell was Austrian but raised in Switzerland. Marlene Dietrich was an American citizen at the outbreak of World War II and worked extensively for the Allied cause. As for Werner Klemperer, he was a displaced German Jew who served in the U.S. Army Special Services entertaining the troops. He’s most famous for his role on Hogan’s Heroes, a role he took only under the conditions that the Nazis would be portrayed as scoundrels and buffoons. Here, he’s absolutely vicious, and it’s worth seeing.

It’s also worth noting that this was one of the first mainstream films to show footage from the concentration camps.

Seriously, this is a hell of a film. Everything here from the characters to the marvelous camera work is worth your time and attention. You’re a much smarter film viewer for having seen it.

Why to watch Judgement at Nuremberg: Beyond the fantastic moral question? Look at the damn cast!
Why not to watch: It tips the scale at just over three hours