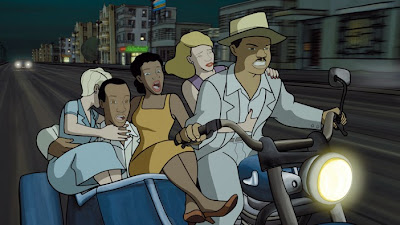 It seems that I’ve got a knack for picking the strange one out of the list of animated features for a given year. In a year where the nominees include Kung Fu Panda 2 and Rango, Chico and Rita (or more properly Chico y Rita) is definitely the odd film out. This is not just because of its old school animation and unique art style. This is a film definitely not for the kiddies. It’s a tale of love, romance, betrayal, and music set in Cuba in the 1940s. Among other reasons to keep the kids out of the room, Chico and Rita features full-frontal cartoon nudity not too far in.

Chico (Eman Xor Ona) is a jazz pianist, and a good one. He’s looking for a break in the music business along with his manager, Ramon (Mario Guerra). In fact, he’s got a song to enter in a competition, with a prize of a month contract at a resort hotel; he just can’t find the right singer. That right singer is Rita (Limara Meneses). When Chico sees her and hears her sing, he’s immediately smitten.

Things are rocky at first, though, but eventually the two warm up to each other and end up spending a night together. Things get complicated when Chico’s ex, Juana arrives and tries to split up the couple immediately. And it works. Thanks to Ramon, Rita agrees to perform in the contest with Chico and the pair wins. It doesn’t make their relationship any easier, though. Rita is offered a chance to go to New York to perform, and thanks to Chico misunderstanding the interest of the man paying attention to Rita—and another appearance of Juana—Rita leaves Cuba to seek fame in a new country. Of course, Chico follows. There are meetings, partings, anger, loss, and betrayal, and of course, eventual redemption.

Chico and Rita is not a film to watch for the story, though. The story is fine, but it’s nothing really noteworthy. In effect, while the details may well be different, it’s not any different in tone or effect than any tale of star-crossed lovers. If you’ve seen a bittersweet romance in your life, Chico and Rita isn’t going to have a massive number of surprises for you.

That’s okay and I’m not complaining. This isn’t a film that trades heavily on its story, although the story is good as far as it goes. A large part of the sell is the gorgeous expressionist artwork. The animation is honestly nothing special, but it doesn’t really have to be because it’s beautiful to look at, and really, that’s enough.

But the real reason to see this isn’t the oddly beautiful pictures on the screen but for the soundtrack. The music, while not constant, feels constant and it’s without question the best part of the film—good enough that I wonder why it wasn’t nominated for both its lush soundtrack and for the lovely title song that goes by both “Rita” and “Lily” at different points in the film. If you are at all a fan of ‘40s jazz, this is a soundtrack to track down and listen to again and again. It would even be worth having the movie running in the background just to listen to that flawless piano.

That said, I find Chico and Rita a difficult film to judge. Animation, regardless of how many films like this one come out, is always going to be thought of as a film realm for children. Even in a good year, the bulk of animated films are created with a younger audience in mind. That’s different in other parts of the world, of course, but animation for adults has never been more than a novelty in the States. Toss in a film that is subtitled, and you’ve got a project with a very specific and small audience in this country.

It’s definitely worth watching, though. Go into it knowing this is a story for adults and about adults to avoid the culture shock. You’ll be able to tell where it wants to go and you won’t be surprised when it gets there, but at the very least, you’ll be taken there on some of the best movie music you’ve ever heard. Sometimes, that’s enough. In the case of Chico and Rita, it’s more than enough.

Why to watch Chico and Rita: The animation is beautiful and the music is to die for.
Why not to watch: The story is one you’ve seen played out before.