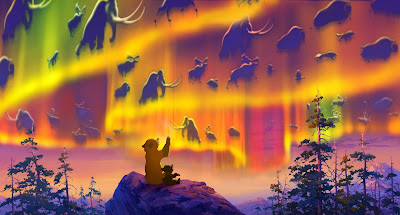 My original plans this year were to try to knock out an animated feature once a week, something I haven’t done or even come close to. If I hit that pace for the rest of the year, I’ll just watch everything on the Oscars list by around Christmas. To that end, Brother Bear popped up on the queue, so I figured I’d give it a go. It wasn’t long into the film that I wished I had gone with a different one. I’ll apologize now if this turns out to be a beloved film of your youth. Sorry, but this one missed me on pretty much all counts.

Sherman, set the Way-Back Machine for the time following the last ice age when mammoths still roamed the planet and humans used stone tools. We meet up with a band of human hunter/gatherers and focus most of our initial concentration on three brothers. These are Kenai (Joaquin Phoenix), the hotheaded youngest; Denahi (Jason Raize), the middle one; and Sitka (D.B. Sweeney), the eldest and wisest. The day we meet the trio is the day that Kenai will be given his animal totem, the guide he must follow into manhood. The totem he gets is the bear of love (his brothers got the wolf of wisdom and the eagle of guidance). He’s not happy with the selection.

As it happens, a bear has raided the latest catch of salmon because Kenai didn’t properly tie the basket into a tree. He goes hunting for the bear and confronts it. A melee ensues, and in the course of the battle, oldest brother Sitka sacrifices himself to save his brothers. Kenai plots revenge on the bear and goes hunting, finally tracking it down and killing it. And then the magic happens: Sitka’s spirit returns and transforms Kenai into a bear. Naturally, since we need a villain, Denahi thinks that Kenai is dead and begins hunting this bear. To get himself transformed back, Kenai must reach the place where the “lights touch the earth.” Basically, he has to climb a mountain where the Aurora Borealis comes into contact with the ground.

But this wouldn’t be Disney if there weren’t lessons a-plenty along the way. Kenai is immediately saddled with Koda (Jeremy Suarez), a non-stop gabfest of a bear cub who leads Kenai to the spot he needs to find. And as only can happen in the movies, Kenai’s initial resentment of Koda eventually transforms into something like a brother relationship as he decides to care for the younger cub who is missing his mother. If you think it’s important that Koda is missing his mother, you’d be right. If you think Kenai has something to do with Koda’s missing mother, you’ve seen a Disney film before.

Of course, there are other characters along the way. No Disney film is complete without a couple of clueless comic relief characters. This time, we get a couple of Moose named Rutt and Tuke played by Rick Moranis and Dave Thomas respectively. Rutt and Tuke are essentially Bob and Doug McKenzie from SCTV, a little joke for the parents, most of whom were still probably too young to get the joke in the first place.

They happen to be one of the actual bright spots for me in a film that didn’t have too many of them. What can I say? I always liked Bob and Doug McKenzie. And I do realize that this is a movie for children, but that doesn’t mean that the plot should be this easy to predict. There’s not a moment here that isn’t telegraphed. If you can guess something approximate to the ending once Kenai turns into a bear, you’re not trying hard enough. In a world where any number of children’s films have featured genuine innovation and sharp storytelling, Brother Bear seems to believe that there is no problem or relationship issue that cannot be solved by a three-minute Phil Collins song montage.

I’m probably being too critical here. Brother Bear, for all its phony mysticism and bullshit moralizing, isn’t a terrible film. It’s just not much more than passable, and that’s with a bar set very low. It wasn’t a banner year in animated film; my guess is that Brother Bear snagged a nomination simply to fill out the ranks, and even with that there were only three nominations in the category.

So there may well be those who enjoy this film, but I will not be counting myself among them. It’s too forced, too obvious, too “I’ve seen it before” for me to get very excited about a couple of tepid songs. It had a single innovation, and that I did like. Once Kenai becomes a bear, the film’s aspect ratio changes, as does the animation. It becomes brighter and more cartoonish on the suddenly bigger screen. That was interesting. Too bad the film itself doesn’t support its most interesting feature.

Why to watch Brother Bear: The message is good?
Why not to watch: This is Disney sappiness cranked up to 11.