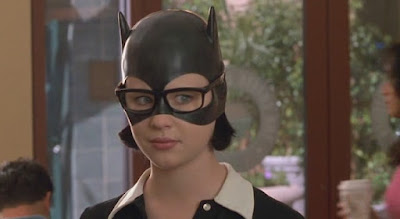 There are movies that we come to at the wrong point in our lives. I think Ghost World is that kind of movie for me. I thought I had seen this. It turns out I’d seen a couple of scenes from it without watching the whole thing. I liked those clips. Now, watching the entire thing at once, I find this to be a film that is less than the sum of its parts. I also think that if I had seen this 15 years ago when I was 15 years younger, I’d have related to it a lot more. I think I’m just too old for the damn thing.

Ghost World is a disaffected teen movie, a film where the characters see themselves as somehow set apart from their peers by virtue of knowing more or by not being absorbed by pop culture. In reality, it’s the story of one young woman who is merely self-obsessed in a way different than everyone around her. She’s convinced that she is special and different, and in truth, she’s really just different.

Enid (Thora Birch) and Rebecca (Scarlett Johansson) have just graduated from high school except that Enid needs to take a remedial art class over the summer to complete her diploma. The two have talked about getting jobs and an apartment together for years, and with the advent of summer, Rebecca starts in on doing just that. Enid, outside of her required art class taught by suitably-loopy Roberta Allsworth (Illeana Douglas), just wants to find things around her to complain about. The two go to restaurants they find tacky, bother Josh (Brad Renfro) on whom they both have a crush, and find different ways to feel superior to everyone around them.

One way that turns out to be meaningful is a prank they play on an unknown man who has written one of those “missed connection” personals. As a joke, they call and set up a meeting, then observe the guy who is expecting to meet someone. That guy turns out to be Seymour (Steve Buscemi), a lonely guy whose tastes are rooted in the earliest days of jazz and blues and who makes a little extra money selling vintage 78s from his record collection. Enid becomes fascinated with him and decides it’s her mission in life to improve Seymour’s love life.

Meanwhile, she finds herself drifting further and further apart from Rebecca. Enid’s modus operandi is to hate everything. When Rebecca wants to go shopping for things for the apartment they will get together, Enid hates everything Rebecca wants to buy. She hates every apartment they look at. And when one of her plans to get Seymour a date actually works and he begins a relationship with Dana (Stacey Travis), Enid’s world starts to spiral away from what she thinks it should be. Worse, a piece of “found art” she submits to her art class ends up getting her in trouble and gets Seymour in trouble as well, since it came from his private collection of things.

The problem I have with Ghost World is entirely the character of Enid. The misfit character is a staple in plenty of movies, and there are a lot of movies I’ve liked that have included main characters I dislike. I think of, for instance Sally Bowles from Cabaret. This is a character with traits I dislike completely, but Sally works for me as someone who is pitiable. She sees what she wants and knows that even if she gets it, it will be fleeting and temporary, but she wants it anyway and does everything she can to get it. Enid should be pitiable in the same way, except that Enid doesn’t know enough to know what she wants. In fact, all that she seems to want is nothing that she can see.

I also think of the title character from Daria, the MTV cartoon series that ended right around the time Ghost World was released. Like Enid, Daria seemed to dislike everything and everyone around her. She was unimpressed by what other people thought was important and she always had a quick putdown for anyone who thought he or she was special. Like Daria, Enid is convinced that she knows more than everyone around her. The difference is that Daria actually was smarter than just about everyone else and Enid isn’t. Enid’s intelligence is actually nothing more than contrariness for its own sake.

The best film adjunct I can think of for Ghost World is Frances Ha. In both films, the title character is looking both for something to keep telling her that she is special and for a way to keep things around her from changing. In both cases, the title character deals with the slow splitting apart of the friendship that she has used to define herself for a large part of her life. The difference is that Frances eventually realizes this, and when Ghost World wraps up, Enid merely moves on from the world she’s lived in, attempting to run away from her problems rather than figuring out that her biggest problem is herself.

I want to like Ghost World a lot more than I actually like it. There are parts of it that are very good, and it’s well cast all the way through. I like the performances. I just don’t really like the sum of the parts as much as I like the parts. I don’t blame Thora Birch—I blame the character of Enid, who I find more than a little repellent. I really think I would have liked this 15 years ago. Sadly, at the age I am now, I don’t have time for attitudes like Enid’s, and that means I don’t really have a great deal of sympathy for what I’m supposed to be sympathetic to in Ghost World.

Why to watch Ghost World: A tale of misfit isolation and the end of childhood fantasies.
Why not to watch: Enid is more irritating than she is charming.