Film: No Holds Barred
Format: Streaming video from NetFlix on The Nook.

This is the second in a series of twelve movies selected by Nick Jobe. 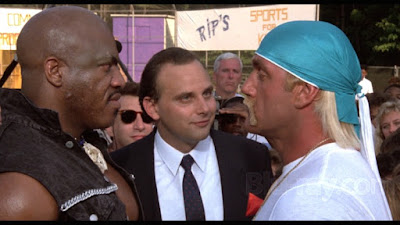 With friends like Nick, who needs enemies? I kid, but there are times when I can’t help but think this. Nick has, I freely admit, introduced me to a number of movies I really like, and in fact a number of movies I have happily recommended to other people. And then, about once a year, he gives me something like No Holds Barred. There’s a part of me that understands exactly what this movie is and is supposed to be, and there’s a part of me that is completely flummoxed by it.

Let’s tear through the plot as quickly as possible. Back in 1989, when the WWE was still called the WWF, the mythical version on tap here has Rip Thomas (Terry “Hulk” Hogan) as its champion. Of course, in this world, wrestling is the biggest possible spectator sport in the world and Rip Thomas is the biggest star. This does not sit well with Brell (that-guy Kurt Fuller), who wants Rip to work for him. But Rip Thomas is a man of integrity, and he refuses to back out on a contract no matter how much he is offered.

As a way to boost his own ratings, Brell starts his own show called Battle of the Tough Guys, offering a $100,000 cash prize (somehow magically tax-free) to anyone who wins. After a couple of random lunkheads square off, we’re introduced to Zeus (Tom “Tiny” Lister), an ex-convict who did time for killing a man in the ring by beating him after the bell. Then, of course, since that’s exactly the sort of movie this is going to be, Zeus starts offering direct challenges to Rip, trying to shame him into a match on Brell’s show, which is of course magically an instant hit despite Rip shrugging off those challenges so he doesn’t (and yes, this is literally the truth) give the wrong impression in front of the kids he’s working with for charity.

There’s also a romantic subplot here. Yes, a romantic subplot involving Hulk Hogan. Samantha Moore (Joan Severance, the poor woman) is hired by Brell as a corporate spy to get Rip to work for him, but naturally, Rip Thomas works his “I’m a nice guy” magic on her and suddenly she’s madly in love with him. Oh, and Zeus also beats up Rip’s younger brother Randy (Mark Pellegrino). So of course we’re going to end with the fight that the whole film was written around to close things out, and there’s not a lot of mystery in how it’s going to end.

So, there is a certain crappy movie pleasure in watching a truly shitty movie that is made with such earnestness and cheese. And yet I have no idea who the hell this was made for. I mean, I’m certain that children who said their prayers and took their vitamins and occasionally ripped a shirt off their bodies. This was certainly meant as a kiddie movie. And yet there are moments here that don’t belong with in miles of a movie for kids. To whit:

* A limousine driver shits his pants when threatened by Rip Thomas.
* Two men (one of them David Paymer, who deserves better) spend time in the bathroom of a seedy bar with an overflowing urinal.
* Jokes about small penises.
* Sam and Rip have to share a bed in a hotel room. Joan Severance wears skimpy, frilly lingerie, which is substantial when compared with Hulk Hogan’s tiny little bright orange bikini briefs.
* There’s a masturbation joke during this sequence as well.
* Speaking of Joan Severance, there’s an almost-rape scene, during which Hulk Hogan assaults a man with a motorcycle.
* Randy Thomas, after his beating by Zeus, may well be paralyzed. He’s at least wheelchair-bound, and his therapy looks a lot like what would be done for someone with severe spinal trauma.
* Zeus also assaults Rip’s trainer, an old black man named Charlie (Bill Henderson).
* People cheer a man dying. Specifically, they don’t really cheer in the final fight until there’s a death.

With Hulk Hogan’s recent racist tirade and Tom Lister’s endorsement of televangelist scam artist Benny Hinn and conviction for mortgage fraud, I’m struggling to find a positive thing for fans of any age here. Really, I just kind of feel sorry for everyone involved.

Why to watch No Holds Barred: Dookie.
Why not to watch: There are few people I’d like to see in wacky romantic hijinks less than Hulk Hogan.