Film: Wilson
Format: Video from The Magic Flashdrive on laptop. 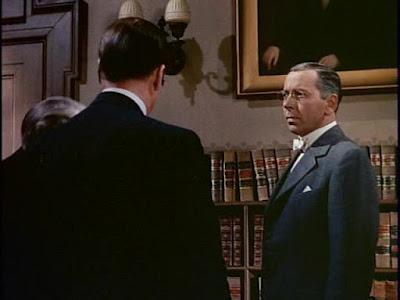 When I was about eight years old, my father taught me a memory trick and had me memorize the American presidents in order. To give you an idea of how long ago this was, Carter was president at the time (he’s 39th). Woodrow Wilson, the subject of the film Wilson was the 28th president. He was the man in charge when the U.S. fought to stay out of World War I and then was in office when we entered the war. Wilson is thankfully not a full-life biography of the man. It covers the end of his tenure at Princeton, his governorship of New Jersey, and then his eight years in office.

And, I hate to say it, but that’s really it. Wilson (Alexander Knox) is tapped by local Democratic machine politicians to run for governor after a failed attempt to democratize certain aspects of Princeton. Wilson is immediately accused of being just another part of the machine, but he manages to get elected almost because he seems to stand against party politics. And, for a wonder, the man is one of those rare people who can’t be bought. As governor, he stands up against the corrupt politics, and it’s not too long before he’s being considered for a run for the presidency.

He gets elected. His first wife dies tragically. He gets remarried. Under difficult circumstances, he gets re-elected on a platform of having kept us out of the war, and shortly thereafter gets the country involved in the war. At war’s end, he creates the idea of the League of Nations, and makes it a part of the peace treaty, and sees it shot down by Congress. Stumping for it nationally, he suffers a stroke, and in the election in 1920, Republican Warren G. Harding is elected instead of the Democratic nominee, and the League of Nations idea is shot down completely, at least in the U.S. Roll credits.

And that, more than anything, is the big problem here. This isn’t about political intrigue. It’s not a political thriller in any way. It’s just political history. I didn’t know Wilson’s first wife died in the White House and didn’t realize he remarried, but really, that’s about the only thing here I wasn’t already aware of going in. I imagine that this was viewed as something like American history being brought to the masses, but the history being told was fairly recent (25 years or so), and much of the audience would have remembered those years and events pretty well.

This is literally a film where everybody stands around and talks, and they do this for about 2 ½ hours. Oh, there’s some archival footage of American troops going off to war, but that’s over quickly and we’re right back to people standing around talking at each other. Political maneuverings aren’t really that interesting in cases like this, especially when we’re given a candidate that is going to be shown to us completely warts-free.

On the plus side, Alexander Knox at least looks a hell of a lot like Woodrow Wilson. I also like that Thomas Mitchell has a large role as Wilson’s assistant Joseph Tumulty, and I find it mildly amusing that Tumulty refuses to call Wilson anything other than “Governor,” even when the man is eight years in the White House.

There was an opportunity here that was completely missed, though. The history is something anyone can learn with a quick spin through an encyclopedia (and could have in 1944 as well). There was a chance to really show Wilson the man rather than Wilson the president, and while we get a few scenes of Wilson singing around the piano with his daughters, shots of him playing golf, and a few moments of the most unromantic wedding proposal in history, and nothing else. I know virtually nothing about the world of Wilson thanks to this movie that I couldn’t have gotten from a Who’s Who biography.

That’s disappointing. I can’t suggest that Wilson isn’t a well-made or even a well-acted movie, but it’s drop-dead boring. Honestly, I’d have rather watched a documentary on the man than this sanitized version of his political career. I’m sure that I’ve missed some solid points to be said in the film’s favor, but I was frankly bored with it, and I found it difficult to care. Woodrow Wilson deserves better, and so does the audience.

Why to watch Wilson: Woodrow Wilson was a pretty good president.
Why not to watch: It’s too long and far too dull.