Everybody Loves a Baby, that's Why I'm in Love with You 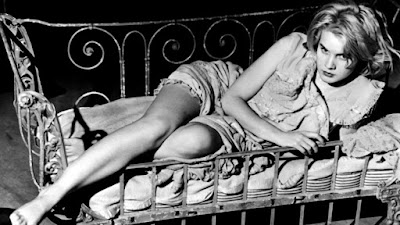 Someone needs to tell me how it was possible that Eli Wallach was never even nominated for a competitive Oscar. Baby Doll was his first screen credit, although he’d done some television work before this. From this first film, Wallach established himself as a force to be reckoned with. While the film isn’t named after him, there’s no question that Baby Doll belongs as much to Wallach as it does to Carroll Baker, who was nominated for her role as the title character. It’s yet another mystery and another reason why I do those posts on Friday. Someone has to give the great Eli Wallach the credit he deserved.

Archie Lee Meighan (Karl Malden) has been married for well over a year to Baby Doll (Carroll Baker) but the marriage has gone unconsummated. The reason for this is that Archie married Baby Doll when her father was on his death bed; the marriage happened because he wanted his daughter to be looked after when he was gone. However, since she was just 18 at the time and not ready for marriage, he made Archie promise that he would not consummate the marriage until she was “ready,” which they have agreed will be her 20th birthday.

The problem is that shortly after the marriage, a man named Silva Vacarro (Eli Wallach) has arrived in the county and built a new state-of-the-art cotton gin, taking all of the business from all of the other gins in the county including Archie Lee’s. Because of this, Archie Lee’s massive house, which he promised Baby Doll he would fix up to its former grandeur, has remained dilapidated and ramshackle. Worse, he’s furnished the house on the installment plan and is desperately behind on the payments. While this is a concern, it’s not his main thought. When the movie starts, Baby Doll’s all-important 20th birthday is fast approaching and Archie Lee is hoping that maybe she’ll give in a day or two early.

Trouble starts when the furniture company comes and repossesses virtually everything in the house. In fact, the only things that remain are the kitchen furniture and the furniture in the nursery, which is where Baby Doll sleeps. In fact, she sleeps in a crib, typically sucking her thumb. Now that the house is empty, Baby Doll has decided that she is done with Archie Lee, which makes him even more frustrated than he’s been for the last couple of years. To attempt to give himself some dignity back, he sneaks out and burns down Silva Vacarro’s cotton gin. Silva immediately suspects arson and realizes that of the former businessmen in the area, only Archie Lee Meigham wasn’t there.

What follows is Silva’s revenge. He’s confident that Archie Lee is responsible for burning down his cotton gin, so he decides to take the cotton he can no longer gin and give the business to Archie Lee with the intent of doing a little bit of detective work. Archie Lee, wanting to restore his house to its former glory, heads off to work the gin with his employees, leaving Baby Doll to entertain Silva. Silva uses this opportunity to do two things. The first is he attempts to get as much information out of Baby Doll as he can. The second is that he attempts to more or less seduce her.

The seduction is actually very interesting. Silva is obviously sexual, but can’t seem to sustain his sexual pressure on Baby Doll for too long, since he frequently switches to asking about Archie Lee’s activities of the night before. He both entices her and frightens her, moving back and forth and throwing her off guard. When he learns that the house the Meighans live in is allegedly haunted, he plays tricks on Baby Doll to make her think the haunting is real and eventually traps her in the slowly-collapsing attic and forces her to sign an affidavit stating that Archie Lee is responsible for the fire at his cotton gin. Then with his goal handled, he takes a nap in Baby Doll’s crib. Essentially, the man commits spiritual adultery with Archie Lee’s wife, doing everything but the actual act itself.

Oh, but there’s more. Don’t worry that I’ve spoiled the whole thing here. There’s still an entire third act that involves a series of confrontations between Archie Lee and the other two principle characters as well as between him and Aunt Rose Comfort (Mildred Dunnock, who was nominated in a supporting role), who lives with Archie Lee and Baby Doll.

There’s a lot to like here, particularly the tension that is built up between all of the characters. I tend to like Karl Malden in movies and I like him well enough in this. Carroll Baker is alternately alluring and annoying. She’s a bit of a Lolita, both highly sexual and innocent, and also both blindly stupid and yet possessed of a sort of animal cunning. This is Wallach’s film, though. The man is a force of nature in Baby Doll, trampling over everything else and everyone else on the screen. How he was skipped over come Oscar time is something I don’t think I will ever understand.

The only issue I have with Baby Doll is that it comes across as a play in the dialogue. Elia Kazan does a nice job with staging this not to look like a drama, but the way the characters talk and specifically what they say reads as theater. I’m also not sure why this was nominated for Adapted Screenplay. Tennessee Williams is credited with the screenplay, but there appears to be no work previous to this from which it was adapted. Such are the vagaries of Oscardom.

Why to watch Baby Doll: For a movie made in 1956, this thing is pure sex.
Why not to watch: It plays very much like a stage play in many ways.