Film: The Cider House Rules
Format: Streaming video from NetFlix on the Nook. 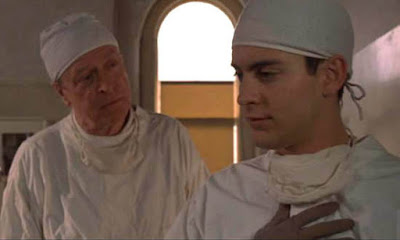 I am still dealing with the loss of Chip Lary; I’m sure I’m sure I’m not alone in this. Every time I’ve posted something over the past few days, I’ve wondered what Chip would have to say about it. In the last week, no film has made me wonder this more than The Cider House Rules. The entire film takes place in Maine, after all. I can’t be sure, of course, but I imagine that Chip probably liked the film and that it taking place in Maine was just another reason for him to appreciate it.

I remember when the film was new, but didn’t hear much about it other than that people liked it and that it was controversial because it dealt at least in part with abortion. I went into it pretty cold, knowing only that Tobey Maguire and Michael Caine were in it. Finding that Charlize Theron, Paul Rudd, Delroy Lindo, J.K. Simmons, and Erykah Badu were in it as well was just a bonus.

We start in an orphanage run by Dr. Wilbur Larch (Michael Caine), a kindly man who also happens to be an ether addict. Larch does his best to do what he feels is right for everyone in his charge. He attempts to adopt out his children, takes in foundlings when he can, and performs abortions when a pregnant woman feels it is her only option. One of his charges he names Homer Wells (eventually played by Tobey Maguire). Homer is adopted out twice and returned twice. The first time, he comes back because he is too quiet and the adoptive parents think something is wrong with him. The second time, Dr. Larch reclaims him because the parents are abusive. With these two strikes, Homer becomes a lifer at the orphanage is trained by Dr. Larch to follow in his footsteps.

The two disagree on the subject of abortion. For Dr. Larch, abortion is a necessary evil, something he must do as the situation demands. When a girl arrives near death from a botched procedure, Larch uses this as an opportunity to press his case. For Homer, the question is far more personal. Had his mother decided her unwanted child should be aborted, he wouldn’t exist. Larch desperately wants Homer to follow him as the head of the orphanage, but Homer has never seen anything else; despite living in Maine his entire life, he’s never even seen the ocean or been off the orphanage that he can remember. When a young unmarried couple named Wally (Paul Rudd) and Candy (Charlize Theron) arrive for an abortion since they are not married, Homer decides to leave with them and goes to work for Wally’s family on their apple orchard.

It is here that Homer gets a taste of the outside world. Wally goes to fight in World War II, flying planes over Burma. Lonely, Candy finds a ready friend in Homer and the two begin a quiet affair. Homer trains in the apple orchard under Arthur Rose (Delroy Lindo), who heads a team of migrant pickers. Arthur takes a great deal of pride in what he does and he runs a tight ship. When someone’s work isn’t up to snuff, he’s not averse to a quick knife fight. The pickers, particularly Peaches (Heavy D) and Muddy (K. Todd Freeman) are happy to do what they’re told. It’s implied that that means staying clear of Arthur’s daughter Rose (Erykah Badu, and yes the character’s name is Rose Rose).

Through all of this, Dr. Larch keeps up a correspondence with Homer, more or less hoping to guilt him into returning to the orphanage and taking up his rightful place. Larch falsifies a college degree for Homer that would allow him to practice medicine even though he never went to school. Homer resists and spends a year away from where he grew up, until a series of events cause him to again reevaluate his life and what is expected of him. I won’t go into those events here, but suffice to say that Larch, Arthur, Rose, Candy, and Wally all figure heavily into the decisions that Homer makes.

The Cider House Rules is a very pretty film and for one that deals with such potentially difficult and controversial topics, a surprisingly sedate one. It is so oddly structured in a way. There are some terrible events that happen here, things that in a different film would be at the very center of the story, but here, they are woven simply into the narrative of Homer’s life and the world around him. It’s beautifully done, and even moments where emotions run high, there is a kind of peace.

The cast, of course, is wonderful. I’m not sure what has happened to Tobey Maguire lately—he’s disappeared. Perhaps he’s decided that the industry doesn’t need him anymore and he doesn’t need the industry. It’s been well over a year since he’s appeared in anything and he has nothing in production or even pre-production. I think that’s a shame. When Maguire is given good material--Pleasantville comes to mind—he can be very effective. Caine, Theron, and Delroy Lindo are all actors I tend to like as well. Lindo is especially good in this. He’s a man with terrible secrets and yet becomes less monstrous and more pitiable by the closing credits.

The Cider House Rules is not a film I will watch frequently, but it is a film I think has a great deal going for it. One of its better aspects is that I actually like most of the characters, even when they act in ways that are selfish and painful. In fact, the one character who does something unforgivable (no spoilers) is likeable until we discover that truth. It’s rare when I find a film that presents characters in conflict with each other for reasons that are understandable on all sides. Primarily, this is the case with Homer and Dr. Larch.

The Cider House Rules is not a happy film, but it is a very good one and a beautiful one, and for that it deserves a watch.

Why to watch The Cider House Rules: It reminds us that life is what we make it.
Why not to watch: Most of us don’t get our problems so neatly resolved.